120 students, guest educators and friends of UJS descended on a small village on the border of South Wales this weekend.

We were joined by representatives of 26 J-Socs, the vast majority of whom were newly elected committee members.

We are delighted to announce that three candidates have secured the required nominations to run in the UJS Presidential Elections. Here they are...

Imagine a UJS that looked, acted and represented you exactly how you would wish... Now make it a reality!

On Wednesday our Campaigns Manager Liron Velleman spoke in Parliament on a panel titled ‘Antisemitism on campus: where do we go from here?’

UJS marked the 100-year anniversary of the Balfour Declaration by hosting a panel event attended by around 50 students. Amos Schonfield of Yachad, Arieh Miller of the Zionist Federation, Sharon Wagner-Zauder of UJIA, Luke Akehurst of We Believe in Israel and Jonathan Farrell of StandWithUs UK discussed the nuances of modern Zionism, the legacy of the Balfour Declaration and whether its vision has been fulfilled.

Members of Queen Mary's J-Soc with other faith societies, pictured at their 'Ask A...' stall during last year's Interfaith Week

Interfaith Week starts next week and we are very excited to be supporting such a varied range of events at J-Socs across the country. With food tastings, music, learning and study sessions, games nights, debates and shared meals, Jewish students will be spending the next week building bridges with students of other faiths, cultures, religions and backgrounds.

Bridges Not Boycotts Conference is a huge success

UJS’ first ever Bridges Not Boycotts Conference took place on Sunday 29 October 2017, with around 60 students of various faiths, backgrounds and beliefs coming together in Leeds city centre. In a series of panels and keynote addresses, speakers explored the need to foster cooperation and understanding rather than ‘othering’ between the communities involved in the Israel-Palestine conflict.

UJS is deeply disappointed that UCL Union (UCLU) and UCL have allowed an event hosting Miko Peled and Dr Azzam Tamimi to take place. Despite concerns being raised by UJS, the Jewish Society and the Friends of Israel Society, the Union has insisted that these speakers do not breach their guidelines for external speakers.

Nominations for the UJS Presidential Election are now open!

It's already been almost a year since Josh Holt was elected UJS President 2017-18. More than 1,000 Jewish students voted last year, and the time has come for you to choose who will succeed him. 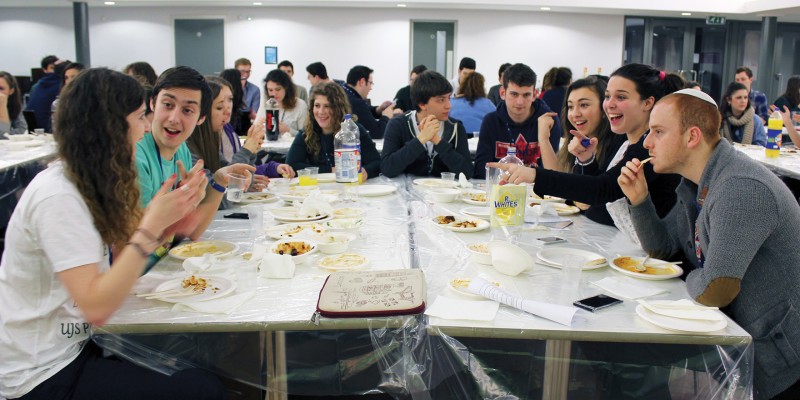 In September 2015, Friday Night Dinners (FND) was set up to provide weekly Friday night dinners for Jewish students living in London. London has 32 different universities across the city and it can be challenging to meet people.