What Happens when an Antisemite is Hosted on Campus...


What Happens when an Antisemite is Hosted on Campus... 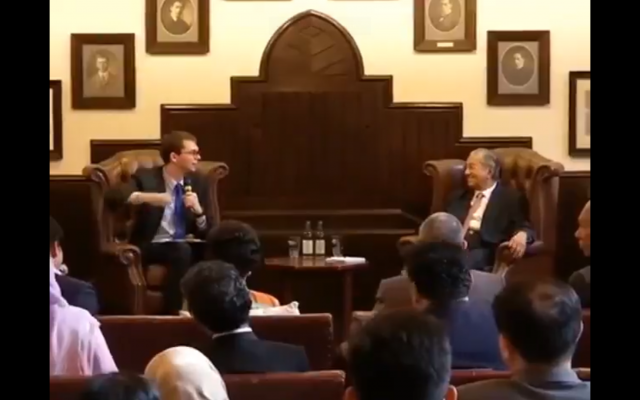 Last night, despite concerns raised by ourselves and other Jewish organisations, the Cambridge Union hosted Malaysian Prime Minister Mahathir Mohamad. Mohamad has been labelled as an ‘unrepentant antisemite’ by the Community Security Trust (CST) after repeatedly engaging in vile antisemitism throughout his career, including antisemitic tropes such as Jews having ‘hooked noses’ and stating that ‘the Jews rule the world by proxy’. Not only that, but in 2012 Mohamad stated that he was in fact ‘glad to be labelled antisemitic’.

As a result, we believed Cambridge Union should not have extended an invitation to an ‘unrepentant antisemite’, particularly when Mohamad used the platform given to him by the Oxford Union earlier this year to double down on his antisemitic rhetoric.

In response to a question asking whether he regretted statements he has made, such as being ‘glad to be labelled antisemitic’ and ‘Jews rule the world by proxy’, Mohamad stated ‘if they are still true, I will continue to stay with my statements’.

The Malaysian Prime Minister then went onto the classic antisemitic line that the Jews should have learnt lessons from the Holocaust, stating ‘The Israelis should know from the sufferings they went through in the war not to treat others like that’. Of course we know he meant Jews, not Israelis, because the State of Israel was yet to be established during the Holocaust.

However, Mohamad hadn't finished talking about Jews yet, he stated that ‘of course if you say anything against the Jews, you are labelled antisemitic. No other race in the world labels people like that, why is it forbidden to criticise the Jews when other people criticise us?’ He said this before going onto say ‘The Jews do a lot of wrong things, which force us to pass comment.’

In response to a question about past comments he made, calling Jews ‘hooked nosed’, the Malaysian PM stated, ‘People do generalise, in describing certain people we take some general characteristics that they have, why is it that it’s the Jews who resent this when other people don’t resent being accused of some general characteristic that they have?’. Correct me if I'm wrong, but it seems that pretty much every group of people objects to being casually racially stereotyped. This was followed by the rather bizarre assertion that ‘the British Jews used to say the Malays are lazy’.

Finally, in probably the most shocking part of the evening, the Malaysian Prime Minister said ‘I have some Jewish friends, very good friends, they are not like the other Jews, that’s why they are my friends’, followed by laughs from the audience.

As we warned would happen, the Malaysian Prime Minister used the prestigious platform of the Cambridge Union to spread his anti-Jewish racism. It is chilling, particularly for any Jewish students in the room, to see a crowd of students laugh off flagrantly antisemitic comments used by Mahathir Mohamad. The decision to host the Malaysian Prime Minister was defended by Cambridge Union as exercise of free speech, but as we consistently make clear, freedom of expression must be balanced against incitement to hatred against a minority group, and that’s exactly what happened last night.
We urge all institutions linked to Higher Education to consider the implications of prejudicial speech when inviting speakers.

You can find a recording of the whole event at: https://www.youtube.com/watch?v=bJ0mYjyU4ec