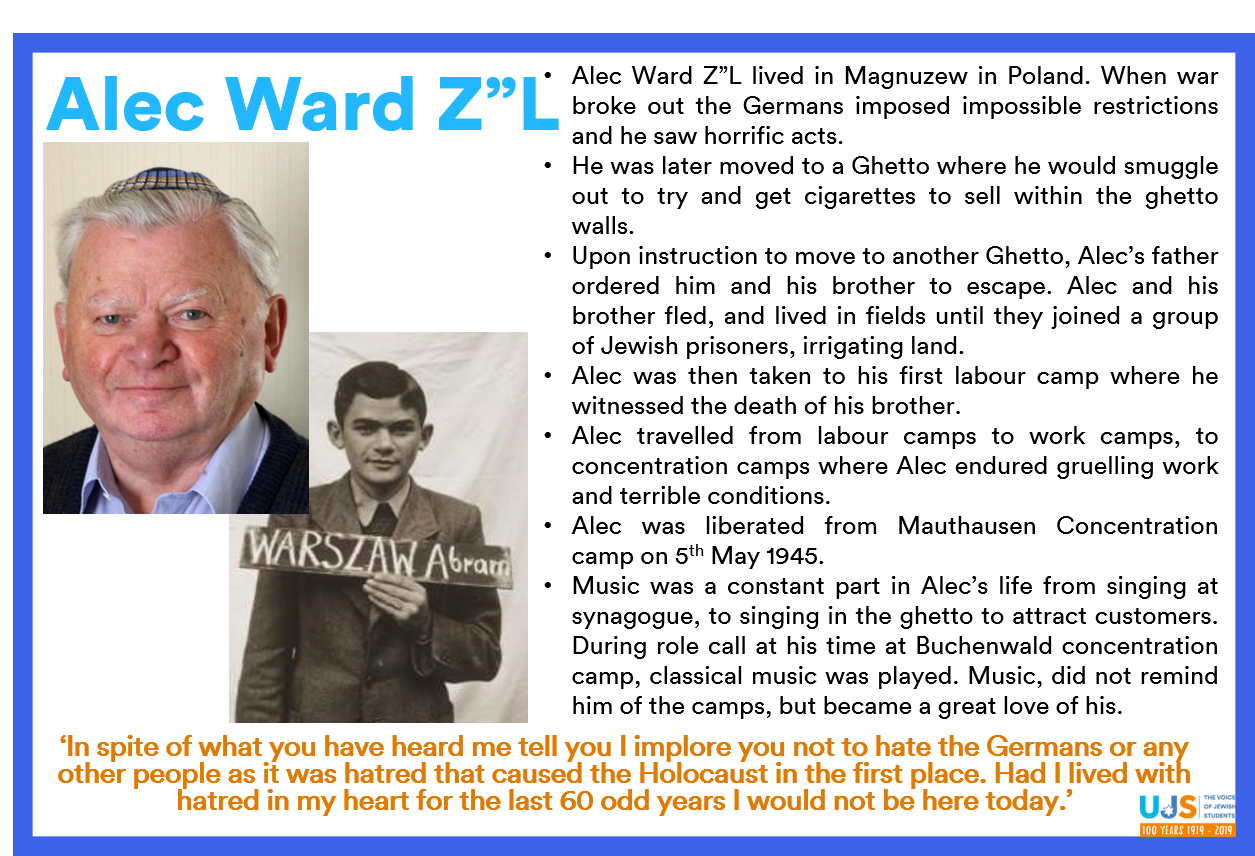 Alec z”l, formerly Abram Warszaw, was born in Parysow, Poland and lived in a town called Magnuzew. He had a very happy childhood and sung in the local synagogue, which was very beautiful. When war broke out and the German army appeared in his town, they imposed impossible restrictions on the Jewish community. As a young boy, he saw two German SS officers cut off his grandfather’s beard and order him to scrub cobblestones in the market square.  Every now and then they would kick his grandfather shouting ‘schnell, schnell’ faster, faster. This incident left his grandfather a broken man.

Later, the Jewish community of Magnuszew were moved into a ghetto. Alec became the breadwinner of the family, as he smuggled himself out of the ghetto and smuggled in cigarettes which he sold on the ghetto streets. To attract customers for his cigarettes Alec sang Yiddish songs. One day a group of Hitler Youth arrived in the ghetto and gave them a few hours’ notice to be evacuated to Kozenice ghetto. Alec’s father, realising the danger they were in, ordered Alec (age 13), and his brother, Laib (age 9) to escape. When one of the guards was busy searching another man, Alec picked up the barbed wire at the fence and he and his little brother crawled under it. All the Jewish people who were taken to the Kozenice ghetto, including his entire family, were then taken to Treblinka extermination camp.

For 3 months Alec and his brother lived in forests and fields. Whilst walking in a field one day they came across a group of Jewish prisoners who were irrigating land for German ethnic farmers whom they decided to join. Early one morning the German SS men ordered the prisoners onto lorries taking Alec to his first slave labour camp.  They stopped in a town called Radom where he experienced the first Selection. During that Selection, the Nazis picked out his little brother and shot him in front of him. This left an indelible effect on Alec.

Alec arrived at Werk A in Skarzysko Kamienna, Poland and spent about two months there. He then went onto Werk C, building a road through the forest. It was simply hell on earth. When the road was finished, he was transferred to the mines where contact with dangerous chemicals turned their skin yellow.  Various incidents in Werk C are still vivid in Alec’s memory, including the hanging of prisoners, the beatings, the selections and the painful hunger and malnutrition.

After that unspeakable place, Alec was taken to slave labour camp Rakov in Chestochowa, Poland to work in the iron foundry, and then onto Buchenwald Concentration Camp in Germany. His prison number was 116174. In Buchenwald, during the endless hours of waiting in the roll-call square, classical music was being played by inmates, while the Nazis counted them to see how many prisoners survived another day.

From Buchenwald a group of prisoners were marched to the nearby town of Weimar to clear rubble, and then to the slave labour camp Flossberg, near Leipzig. None of them believed that they would come out alive from that place. Alec made friends with a boy of a similar age to him who helped keep up morale. As the Russian army was approaching, the Nazis put them on a cattle train to Mauthausen concentration camp in Austria which took 15 days. There were 1000 prisoners in their wagon and had hardly any food or water. After realising they were unlikely to survive the journey, they organised an escape party. Some prisoners had jumped from the train and Alec was meant to be next. However, in order to deter further escapes, the SS guards put a few bodies (of boys who had been shot trying to escape) back into the wagon and they were guarded for the rest of the journey. One of these included his friend who he sang with.

Alec was finally liberated by the American forces on 5th May 1945.

For more information about Alec’s story: 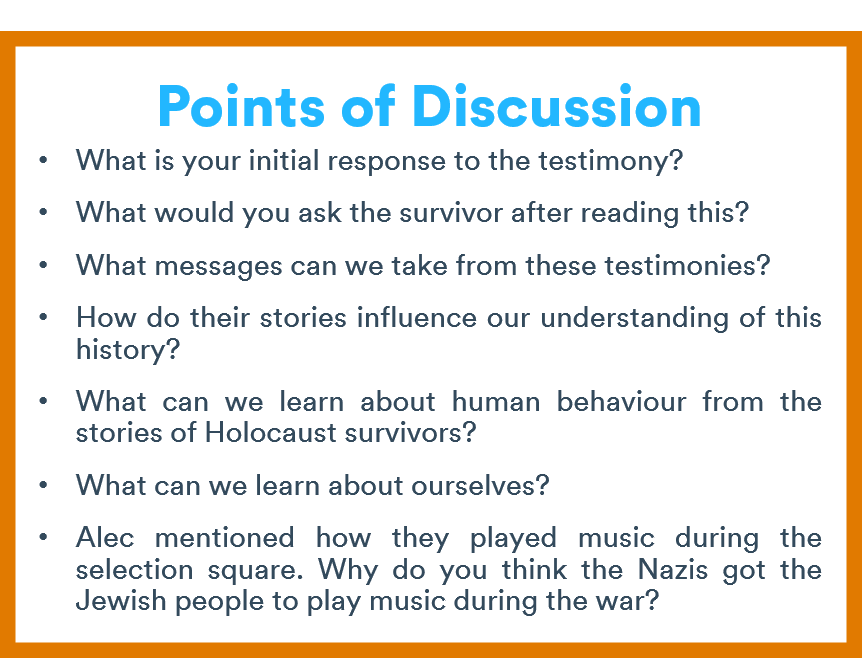