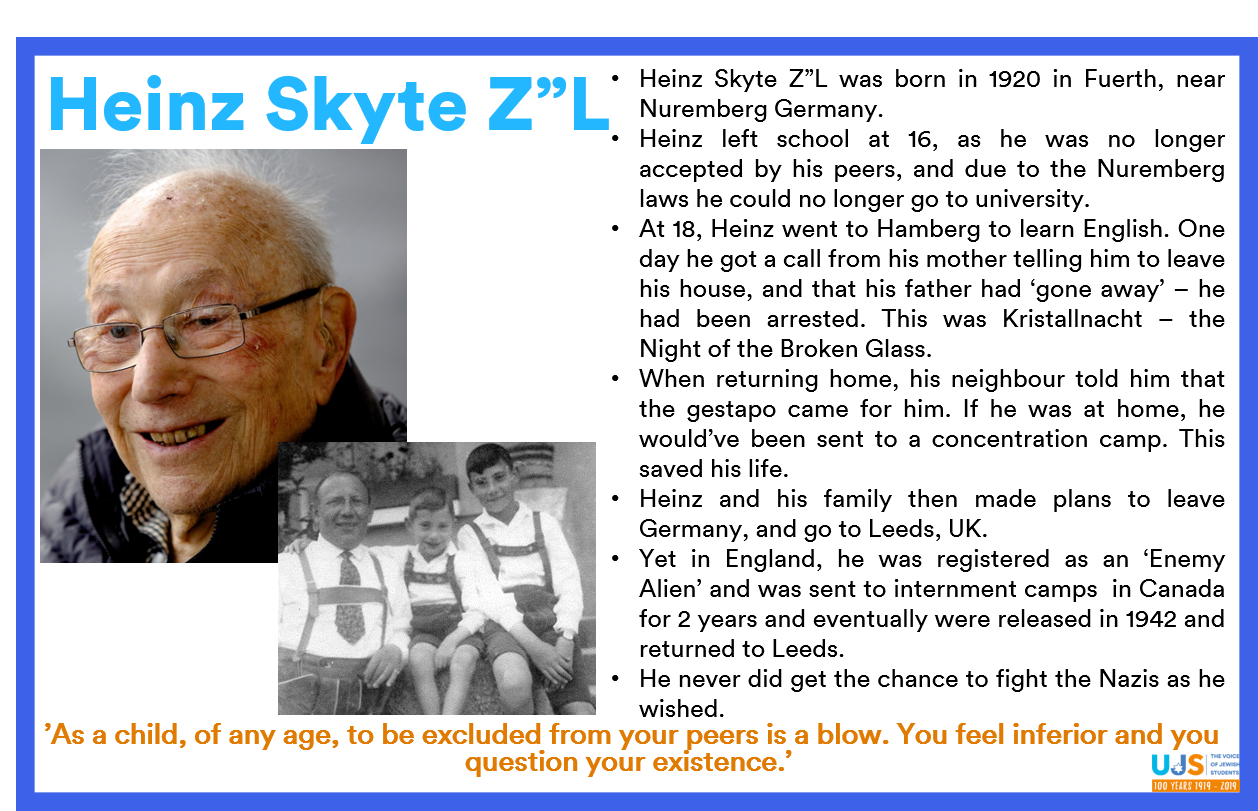 Born in 1920, Heinz z”l was born in Fuerth, near Nuremberg, Germany. Heinz was almost 13 when the Nazis came to power. He remembered looking down from his window, watching the Nazis parade the streets, as the Nazis always celebrated their successes with torchlight processions and songs, bloodthirsty songs. When the Nuremberg laws came in the autumn of 1935, this legalised anti-Jewish measures and Heinz was no longer allowed to go cinemas and to clubs. There were three Jewish boys in his school class including Heinz, but the Hitler Youth leader approached him and said it was time to leave the school, as no one wanted him there. Heinz left school at 16. If it wasn’t for the Nazis, he would have had the opportunity to go to university, although at this stage, Jews were not accepted.

At 18 Heinz went to Hamburg to go to college and learn English.  In the evenings he and some classmates got together, and they heard the news – they knew that something was going to happen. In Nuremberg, his parents were arrested and were kept standing in the square in the centre of town for around 2 hours and were spat on and hurled abuse. The synagogue was then set on fire. Then the women, children and elderly people were sent home. When his mother got home at 4 am, she rang where Heinz was staying, she said that his father had gone away, which was code for he has been arrested. She told him to get dressed and go for a walk, which is what he did. He sat on park benches, went to department stores and tried to make himself small, and not stand out. He could see the smoke from the burning synagogues everywhere. There were groups of Jewish people being frog-marched through the streets, windows were smashed. The Germans invented the term Kristallnacht, the Night of the Broken Glass. Eventually, he went home, and the landlady said that the Gestapo had come for him. If he had not have left, he would've been sent to a concentration camp.

His father was arrested and sent to Dachau concentration camp and was there for 5/6 weeks. Most of the people were released just before Christmas 1938 and when he came home, he was a completely changed man. It was then obvious that there was no future for them in Germany but there was nowhere to go. Frank, his brother was in Leeds and tried to get him a trainee post in England. He finally succeeded and he came to Leeds. He managed to get visas for his parents, which was good as 4 days later war broke out.

The day war broke out, the police came asking them to come down and report to the police headquarters. They were registered as ‘Enemy Alien’ and cameras and binoculars were impounded as they were seen as spy equipment. Churchill had just become Prime Minister and his civil servants famously asked him what to do with these enemy aliens. Churchill said, ‘collar the lot’. Then they were interned – father, brother and him. There was a feeling of soreness, as Heinz believed that he and his family were more opposed to the Nazis than the British natives were. They were kicked out in Germany because they were Jewish and interned in Britain as they were German. Heinz and his family wanted to fight the Nazis but instead, they were kept behind barbed wire. Heinz and his brother Frank were sent to internment camps in Canada for two years. They were eventually released in 1942 and returned to Leeds. They never did get the chance to fight the Nazis.

For more information about Heinz’s’ story: 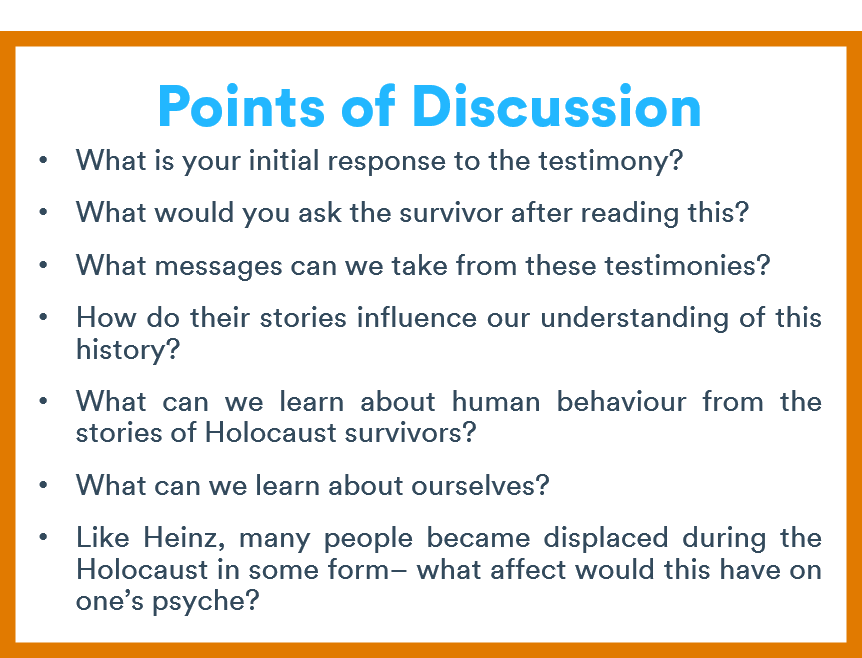