From graduate to go-getter: how I found my dream career after university


From graduate to go-getter: how I found my dream career after university

People often ask me how I got into the Fashion Industry, but the truth is I'm not sure I ever really had a choice in the matter. Having come from and been inspired by a line of tailors and dressmakers, 'shmutah producers' and fashion entrepreneurs, I've always felt as though it was honestly just in my blood.

I graduated from the University of Birmingham with a 2:1 in History of Art, and unlike most of my classmates who had dreams of pursuing careers in Curation and Research I just knew I wasn't destined for that path. I've always been extremely creative, and don't get me wrong, I did love my course- it's just as a girl who didn't once finish the 'essential reading' for a seminar in three years I'm not entirely sure I could be trusted to be digging into archives from the 1850s. 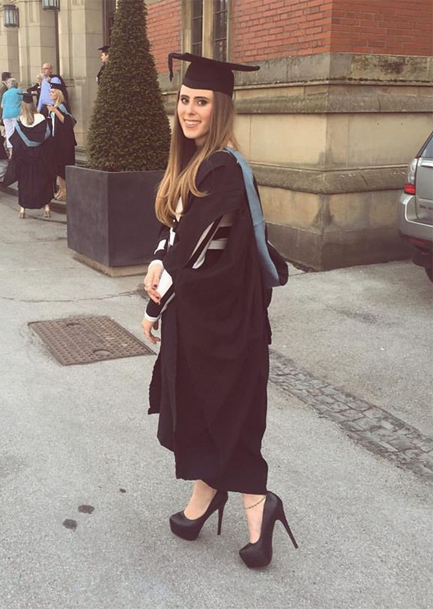 If you would've asked me what I wanted to be before I went to Uni, I would've told you I had dreams of being a fashion journalist. Hell, I even wrote it in my yearbook! (The question was: where do you see yourself in 20 years and my answer was Editor-In-Chief of Vogue magazine. Don't get too comfortable Edward Enniful, I've still got another 16 years to steal your corner office!)

I began my journey into the weird and wonderful world of Magazines at Cosmopolitan UK, and to date it was one of the best places I've ever worked. Shortly after Cosmopolitan, I interned at InStyle, Grazia and Vogue until finally settling into my job as a Fashion Assistant at Time Inc, working across Woman, Woman's Own and Woman's Weekly.

I remember my first day as an Intern so clearly, it was in June 2016- shortly before I had graduated. I had gone to the Joe and The Juice next door to the Hearst building to waste 20 minutes (side note: my dad always taught me it's better to be half an hour early than 2 minutes late). As I was about to indulge in the overpriced cappuccino I had just bought myself, my phone rang;

'Ugggghhhh' I thought, 'not another PPI call...'

'It's Jess calling, from Cosmopolitan, I just wondered if you were still coming in today?'

Panic set through my body, I had checked the confirmation email 4 times the night before and was nearly 100% certain I started at 10. But here I was, and in the space of three minutes I'd somehow gone from being 20 minutes early to half an hour late. What a fabulous first impression.

Initially I was so surprised that the office had such a good vibe, I remember that one of the first things I thought was how happy everyone looked. Where was Meryl Streep demanding a new season Dolce & Gabbana dress? The people fleeing in terror at a Starbucks order that had normal milk instead of almond? The cold and bland marble floors and glass walls that held in all the juicy secrets, and pushed out all the people not deemed important enough to access them? People seemed down to earth, helpful and friendly. I won't bore you with all the details but what was meant to be a one-week Internship quickly turned into three of the best months of my life.

Don't get me wrong, interning can be TOUGH. There will be times you're tested to the point where you feel like you just can't anymore, when you're in the office at 9 pm finishing up some Credits for a Main Fashion story, when you've been sent to a Vintage store to pick up a pair of Levi's only to be confronted with 300 pairs, and when you've written so many returns labels you feel as though your arm is going to fall off and the courier guy knows you by first name (Hi Hector!)

There will be rails to carry, coffee to get models and brands to chase. There will be times where you just have to act on instinct and it's in those sink or swim moments that you'll know if it's a career you think you'd want to pursue, because every Fashion Assistant, Stylist, Writer, Editor and Director has done a stint in a Fashion Cupboard.

I met some of the best people interning, people staying on their friends’ couches and working night shifts just to pursue their passion. Talented editors who I'm fortunate enough to still be able to go to for advice, and fellow Fashion Assistants who share knowing smiles with me across Press Breakfasts.

All in all I interned for just under a year before securing myself a job as a Fashion Assistant, and in that time I was challenged, questioned, briefed and even belittled a couple of times- but there is not one single thing from any of my internships that I would change. From misplacing an extremely expensive earring to watching the wrong model walk down a catwalk on a fashion show later broadcast on TV, from walking from the studio in the snow for 25 minutes to catch two buses and a tube just to collect a pair of tights, even down to accidentally trimming the stems too short on the editor’s flowers- you're going to make mistakes, but it's these mistakes that help you to define the sort of boss, colleague and even person you're going to be. It's a human flaw, EVERYBODY regardless of how book smart they may be, makes mistakes. It happens.

My job now consists of assisting the Stylists on my team, compiling pages for three titles, overseeing all samples that enter and leave the Fashion Cupboard and responsibility for a team of Interns who change every month. I truly believe that without my early experience, I wouldn't have the first idea on how to do my job. There's not been one day since I started that I haven't used a lesson that I learnt from interning and adapted it to my job. Especially when my interns go and get me my Almond milk cappuccino.

Joking aside, be brave, be confident, be inquisitive, be nice (if someone's having a bad day you'll be amazed what a cup of tea can do- you're never too qualified to be kind) and ask lots of questions, because if you don't ask the answer is always no. Don't be afraid as coming across as annoying (a mistake many people make) be smart and be forward thinking. Clean the fashion cupboard without being asked. Uncertainty hangs over everyone, it's ok to be scared about what you're going to do after you graduate, especially when your mums friend Susan insists on asking you for the fifth time;

'So what are you doing after you graduate?'

Write a list of all the places you'd like to work and then put your head down and do some research. Who's the fashion team? Do they normally have interns? Are the interns paid? Will they take someone with no prior experience? Find an email address, and then just like that... Press send. I promise you, the person who gets your email isn't going to be sat in Gucci loafers in a glass box sneering at you whilst their minions run around London trying to locate New Season catwalk samples from Paris Fashion Week whilst they're sipping their almond chai matcha soy grande latte.

Feeling inspired and ready to go: Grace looks back on Chazon