For decades, UJS has been championing the Jewish people’s right to national self-determination. With UJS being one of the first diaspora Jewish organisations to support mutual recognition between Israelis and Palestinians, much of our work around Israel campaigns focus on advancing peace in the region and raising support for the Two State Solution. Below are just the highlights of the Israel campaigns UJS and Jewish students have put on the last few years.

March can be a divisive time on campus when it comes to the rhetoric around Israel. In 2020 UJS launched a new initiative, Spring into Israel, a campaign to ensure there was as many Israel related events on campus during this month as possible. Spring is the time of regrowth and can be time where Israel events on campus can bloom.

UJS brought together 33 different ready made sessions which could be delivered on campus, by 19 individual speakers. All students had to do was book the room, fill out a guest speaker form and recruit the attendees, UJS would do the rest.

Events spanned from discussions around the de-legitimization of Israel, Israel's foreign relations, exploring the graffiti of Israel and an interactive Israel pub quiz.

Although the events were cut short, the campaign

moved online bringing students all going the country together to discuss all things Israel. 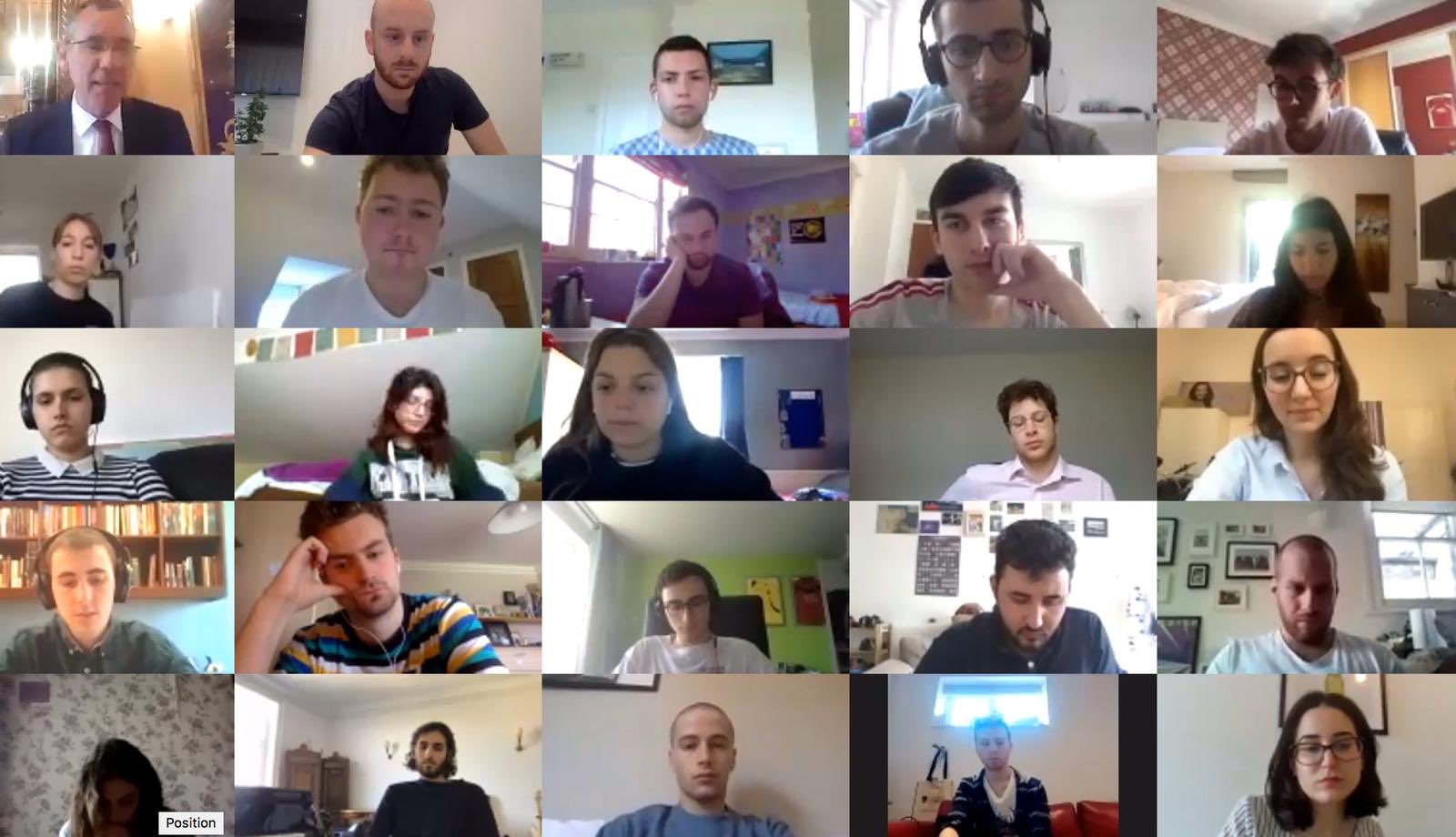 The Bridges Not Boycotts campaign was a manifestation of many decades of Jewish students long held and annually agreed policy, that being to combat attempts to demonise and delegitimise Israel, whilst engaging in education underpinned by a desire to realise Two States for Two Peoples.

All too often, conversations on campus are divisive and unconstructive, where those on different sides of the conflict rarely come together. We recognise the complexities and nuance in the conflict and we seek to export dialogue rather than import division when it comes to how campuses respond to the Israel-Palestine conflict. Through this campaign, UJS is fostering a space for informed debate and responsible dialogue, promoting community cohesion on campus. 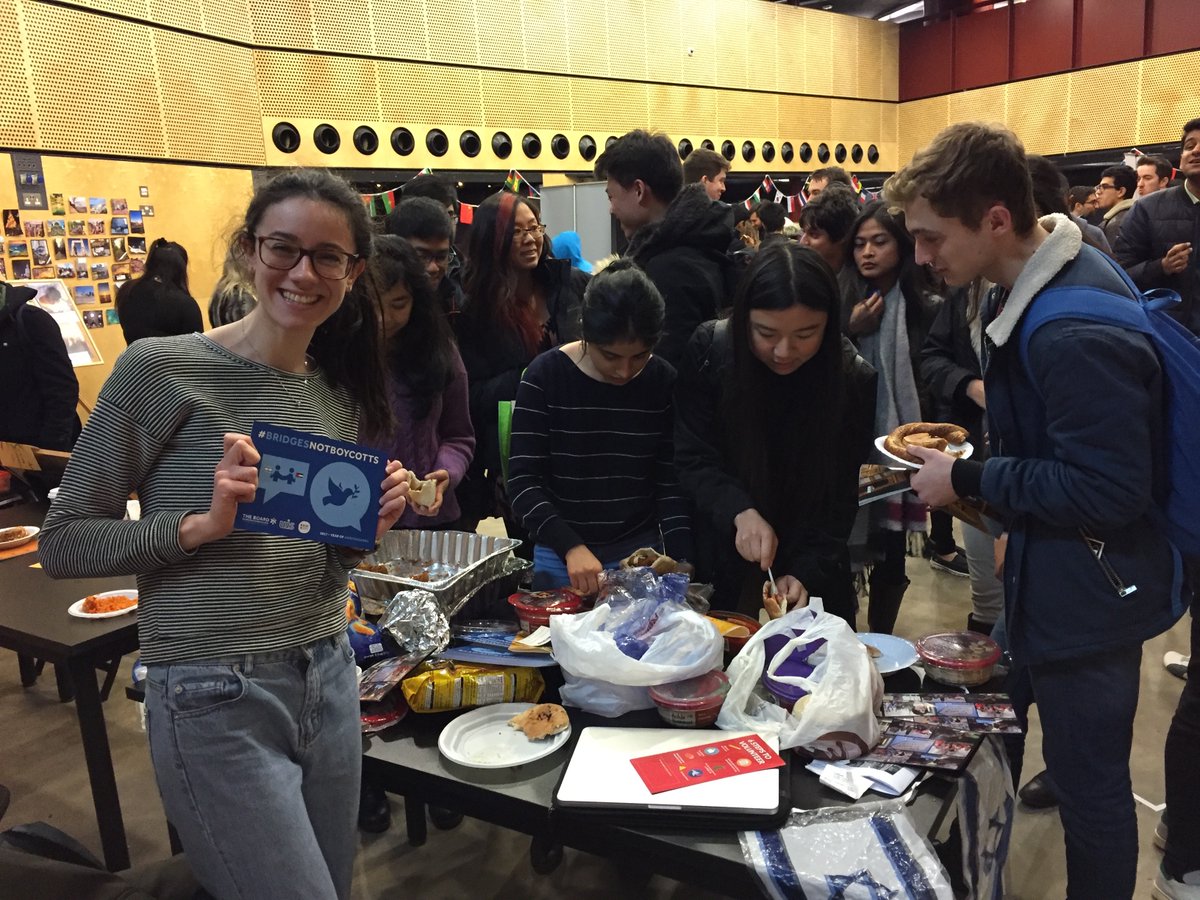 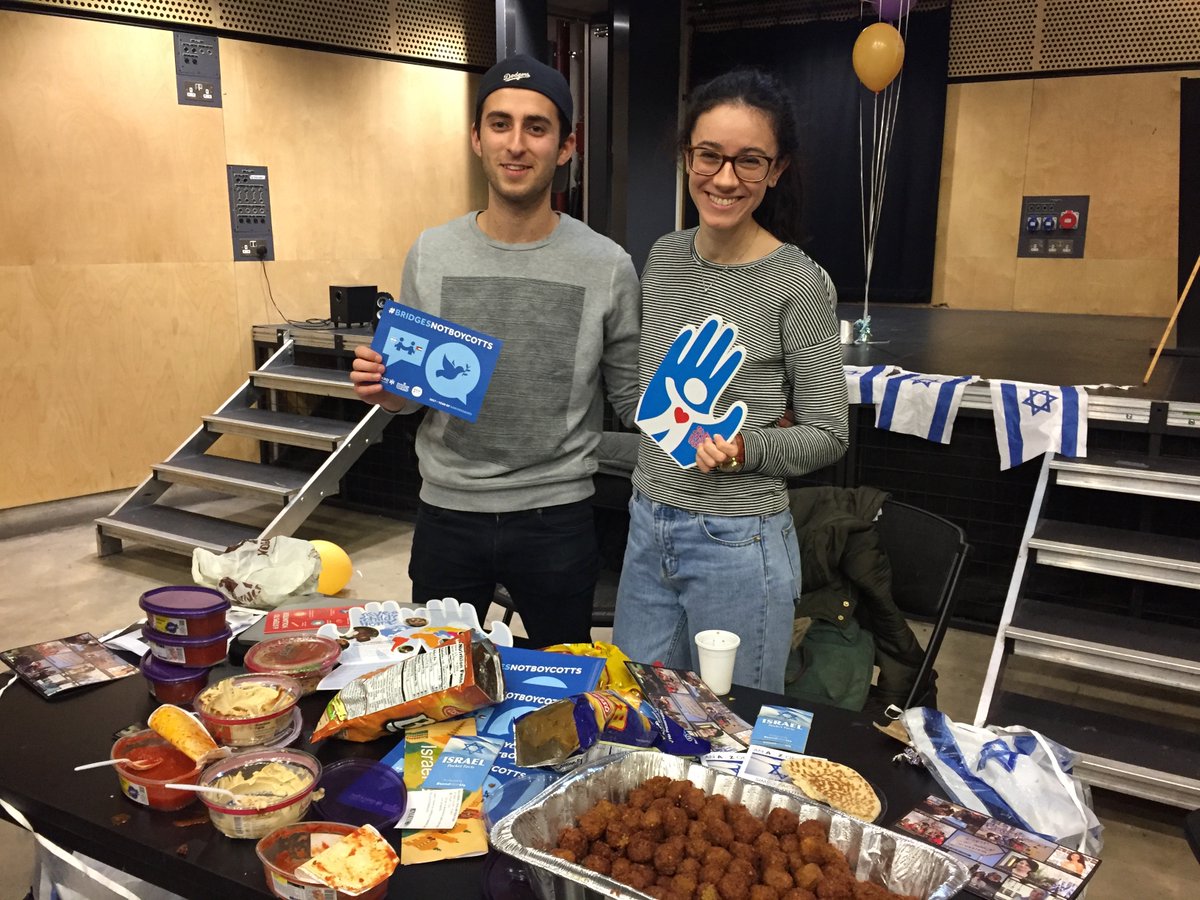 #BRIDGESNOTBOYCOTTS  was a brand new campaign for 2017. Jewish students continue to promote dialogue and coexistence, supported by the Union of Jewish Students together with We Believe in Israel and the Board of Deputies.

The campaign launched with #BRIDGESNOTBOYCOTTS week, which took place from 20th February - 3rd March 2017 and focused on two key areas: 2017 as a year of anniversaries and Pathways to Peace. Read more about both of these in Liron's blog here.

The postcards below were distributed to campuses across the UK and were used to start or shape discussions at #BRIDGESNOTBOYCOTTS stalls, lunch and learns and other sessions. One focuses on 2017 as a year of anniversaries and the other looks at various Pathways to Peace. They are still available for download here, so feel free to take a look. 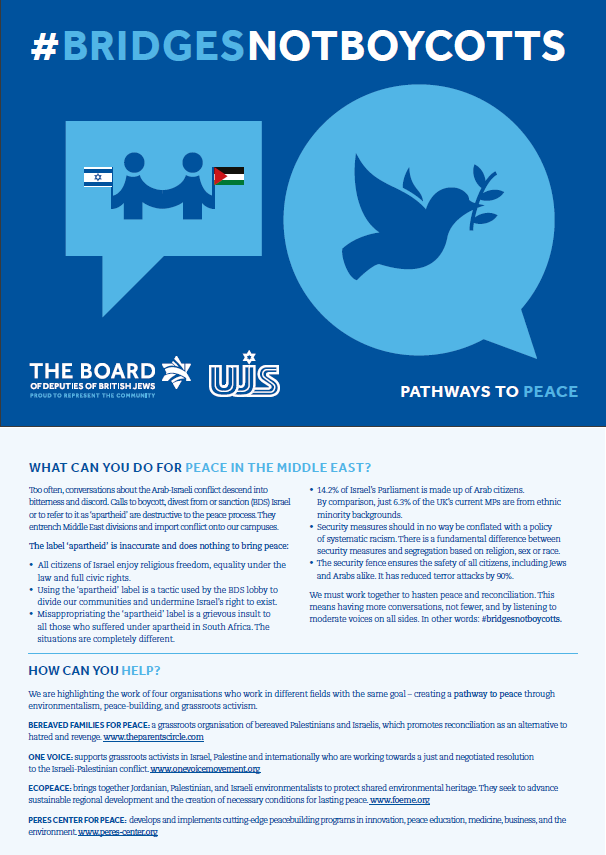 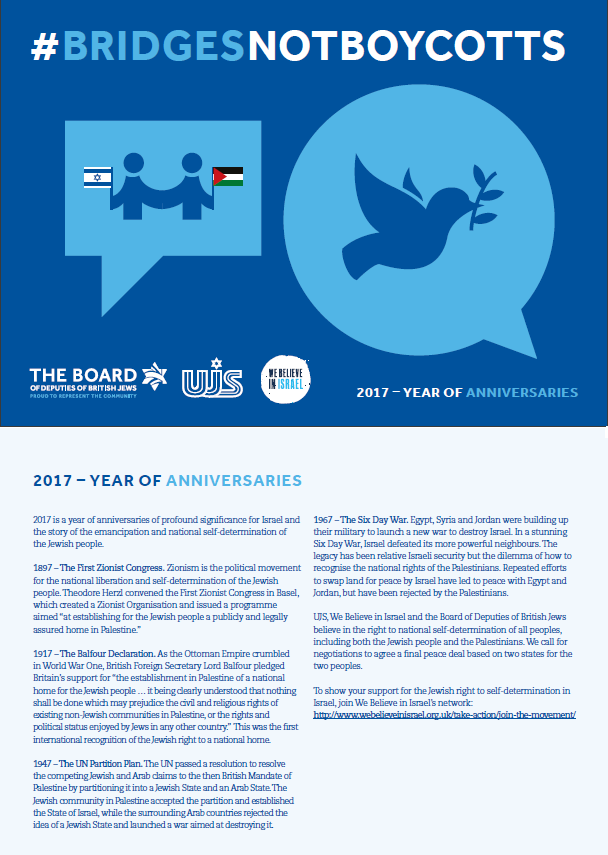 #BRIDGESNOTBOYCOTTS week was followed in October by our first ever Bridges Not Boycotts Conference which highlighted grassroots efforts for peace within and between the different communities involved in the Israel-Palestine conflict. Alongside opportunities for discussion, debate and dialogue on the future of the Israel-Palestine conflict, the conference also promoted actions that students can take on campus to promote peace and dialogue. Read about the conference here. 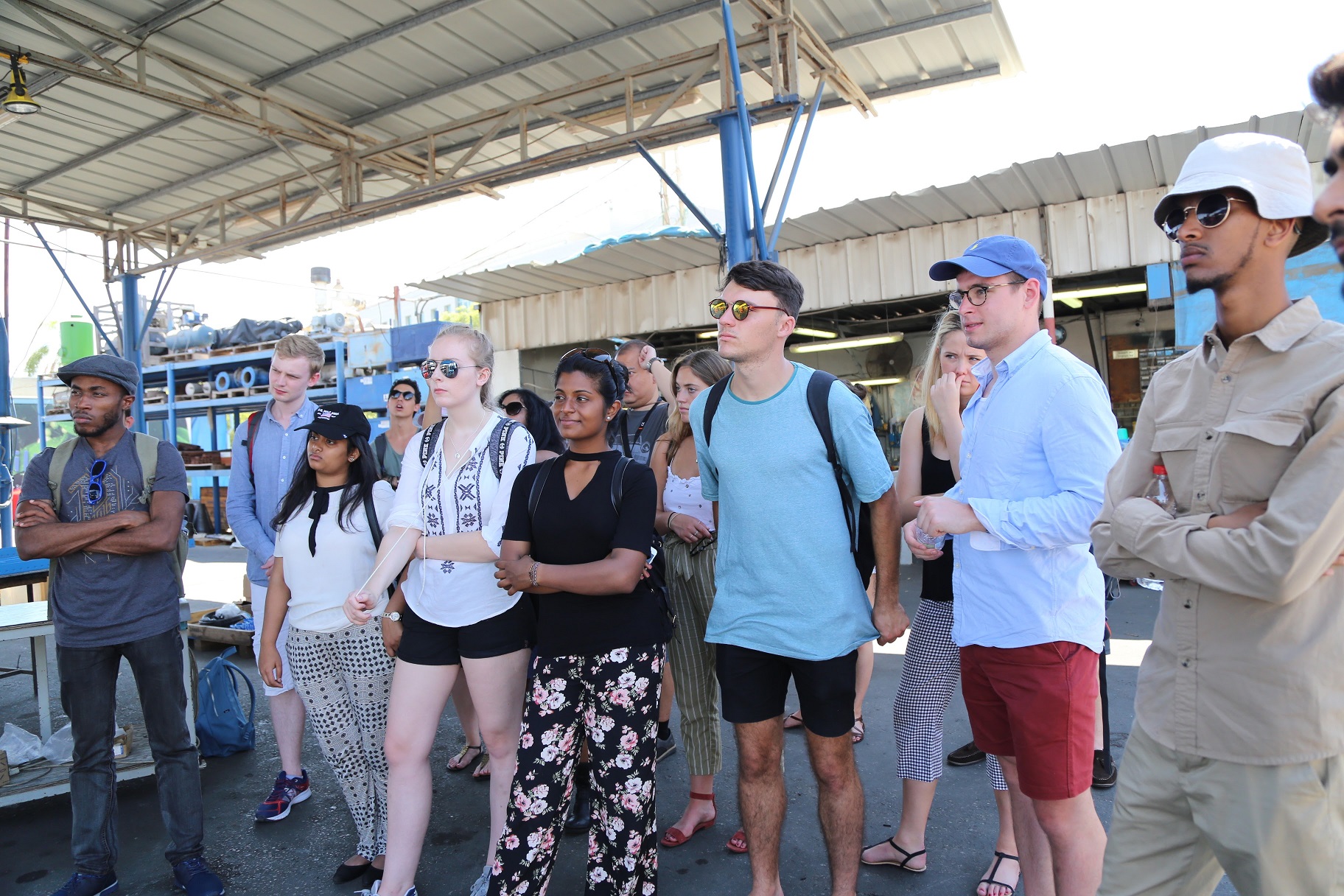 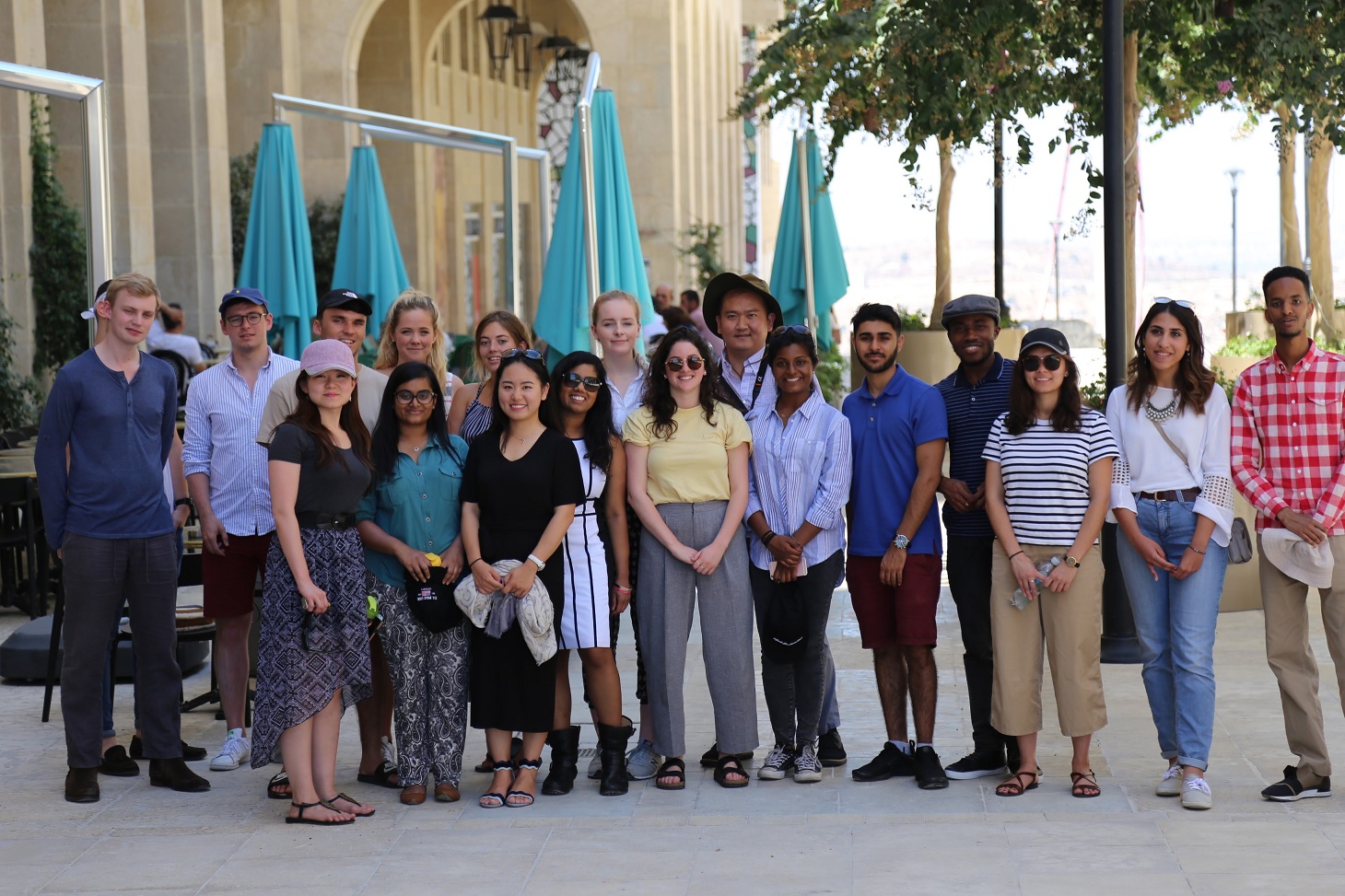 The #BRIDGESNOTBOYCOTTS campaign also includes specialised, tailor-made trips to Israel and Palestine for students from a broad range of campuses. Our first Bridges Not Boycotts trip was the highly successful Let’s Talk Business, for those interested in startups and social enterprises; read one installment of Jonah’s four-part blog here.

Dialogue Not Division was a campaign launched by UJS and supported by other Israel-related UK organisations in 2018-19 in response to a number of Israel-Palestine events on campus where attempts of dialogue were shut down. This campaign followed the same principles of previous UJS Israel campaigns to combat attempts to demonise and delegitimise Israel, whilst engaging in conversations aimed at advancing peace. The campaign was launched with a video in November 2018 in response to a countrywide plan to host events on campus which focused around shutting down dialogue and promoting boycotts. The video featured Jewish students from around the UK talking about the importance of dialogue.

The campaign then moved onto campus in February and March 2019, with Jewish students around the country tabling and hosting events which focused on bringing people together in relation to Israel-Palestine. 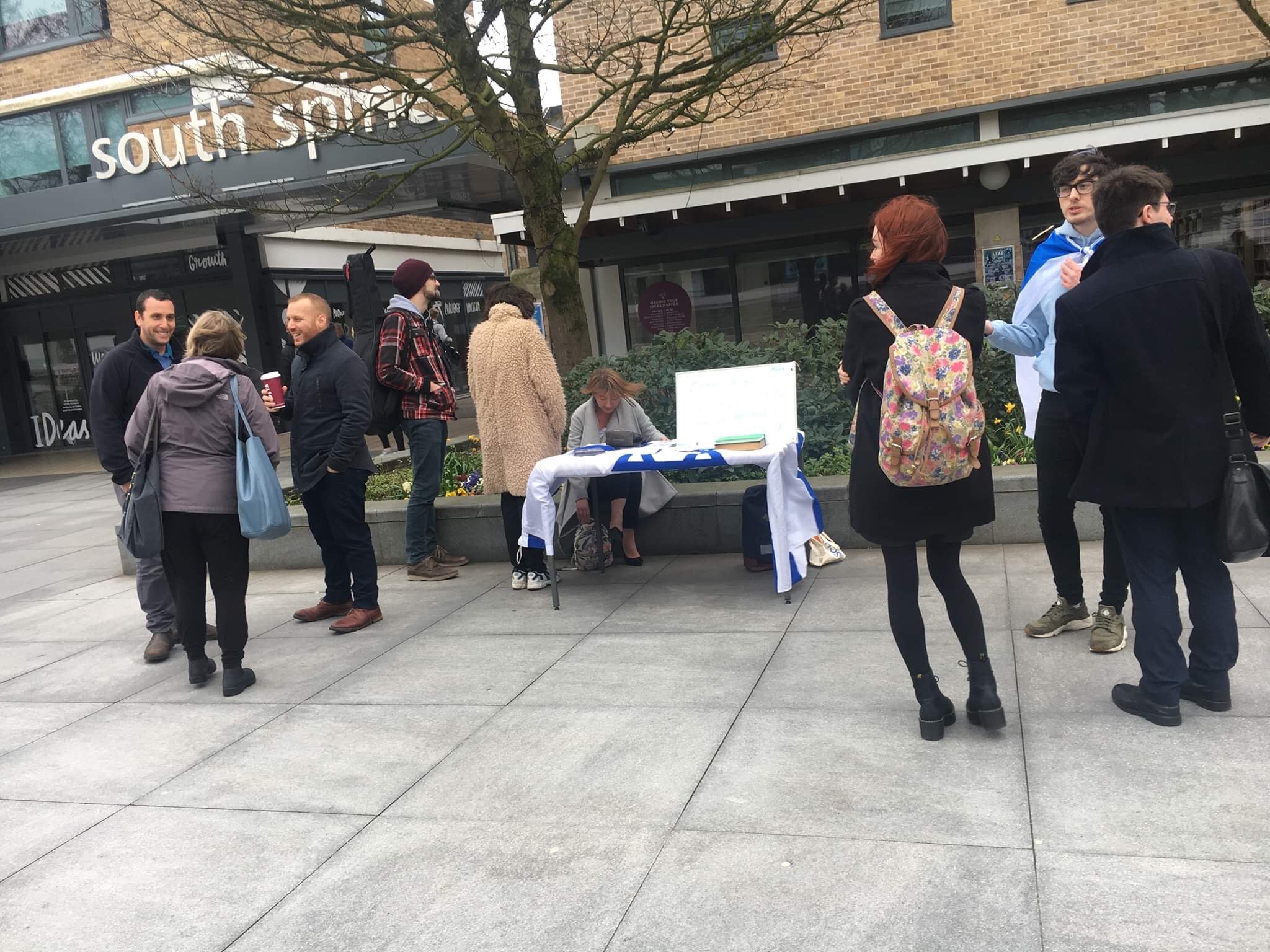 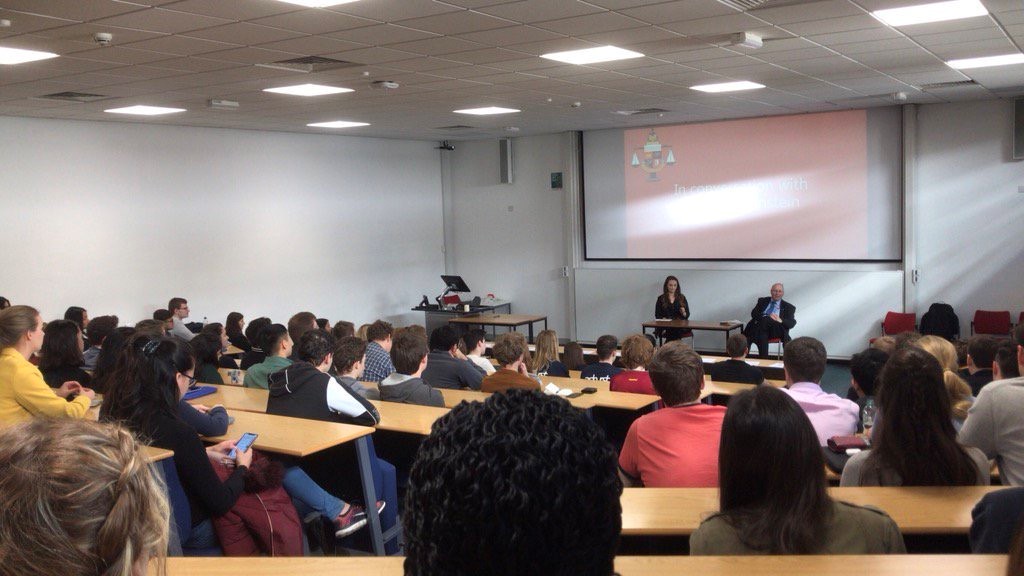 UJS, in partnership with the Jewish Agency, brought author and academic Gil Troy on a campus tour in October 2018 as part of our Exploring Zionism campaign. The idea behind the campaign was to counter some of the myths on campus about what Zionism really is, whilst in addition giving Jewish students the opportunity to explore where they fit on the Zionist spectrum. Author of The Zionist Ideas: Visions for the Jewish Homeland – Then, No, Tomorrow, Troy is an expert on Zionism’s history and its thinkers. Troy divides Zionist thinkers into six schools of thought, ranging from Labour Zionism, to religious Zionism, to political Zionism.

Gil visited UCL, Queen Mary, Warwick, Leeds, Manchester, and Central London Friday Night Dinner on his tour, and gave students in attendance the chance to delve into the history of the movement behind the creation of the State of Israel, and the diverse range of thinkers and visions behind it.

Aside from hearing from an expert in the field of Zionist history, the campaign also focused on showcasing the range of voices and opinions that Jewish students in the UK have about Zionism and Israel. From those who identify as progressive Zionists, to religious Zionists, political Zionists, and non-Zionists, Jewish students come from a huge range of backgrounds and beliefs when it comes to the topic of Zionism.

That is something which should be celebrated, and this campus tour provided the opportunity to do just that. 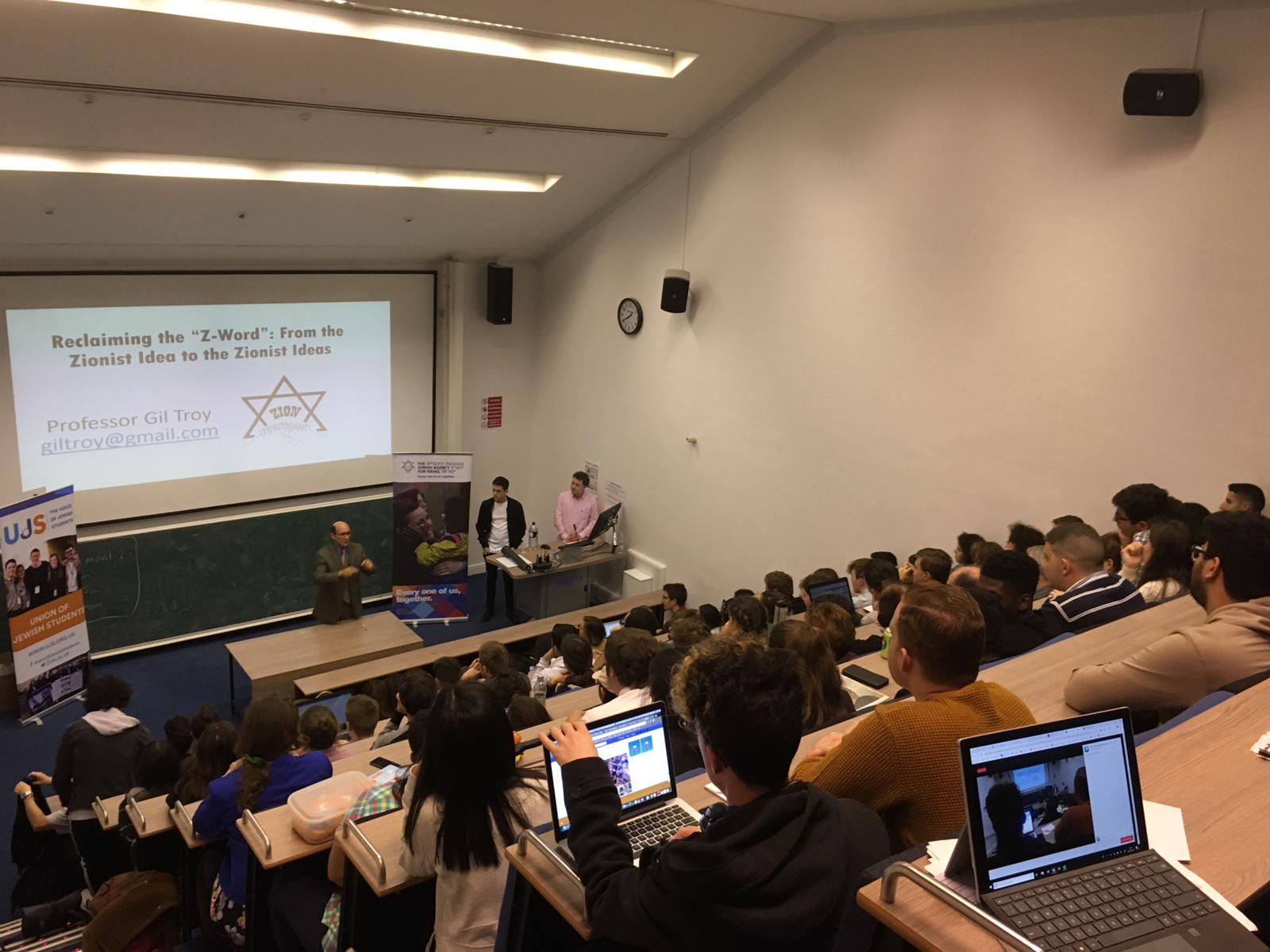 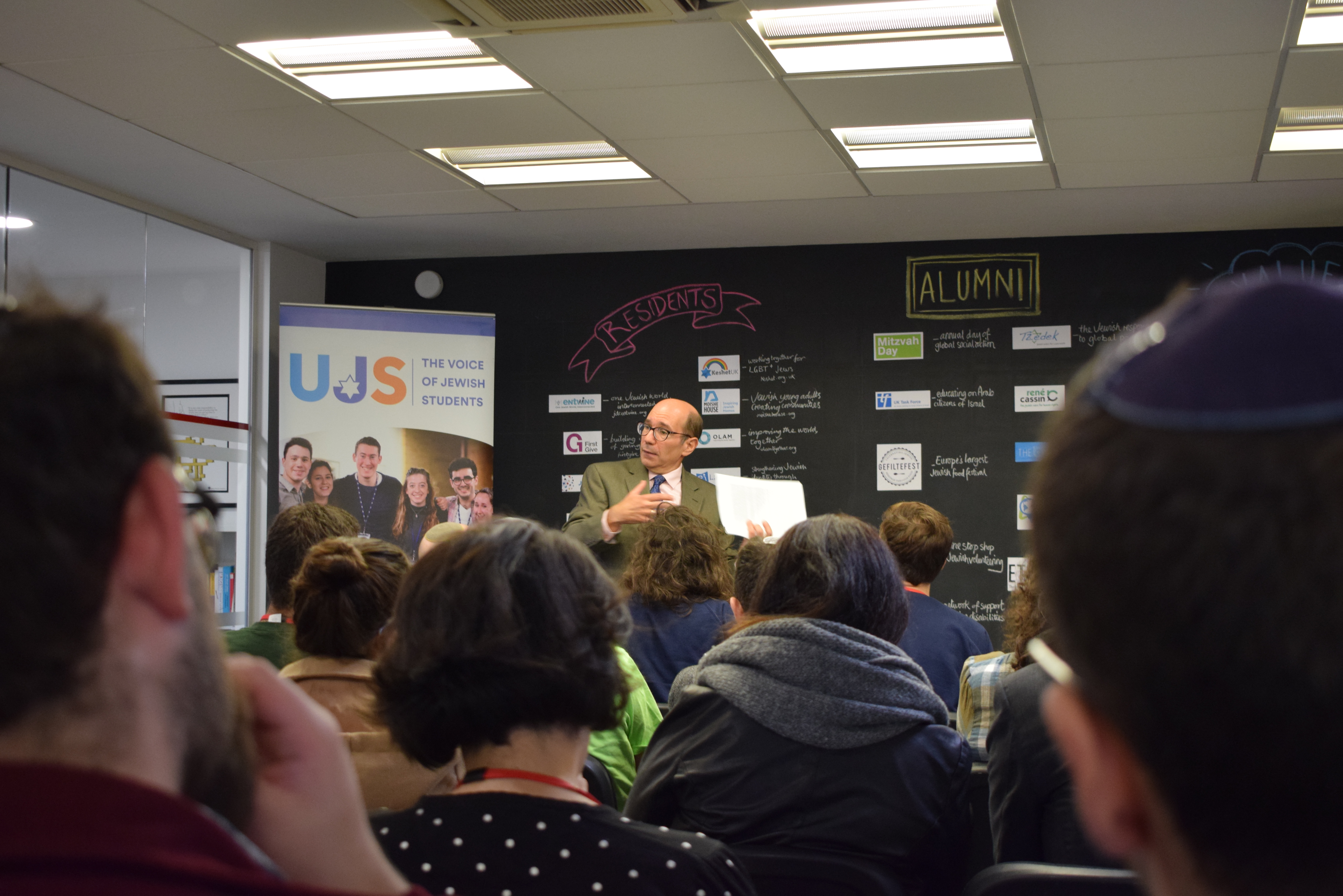 Every year we celebrate this work of students at our annual Israel Student Awards, where students are awarded for their work, judged on a range of categories from Academic Event of the Year to Israel Campaign of the Year. 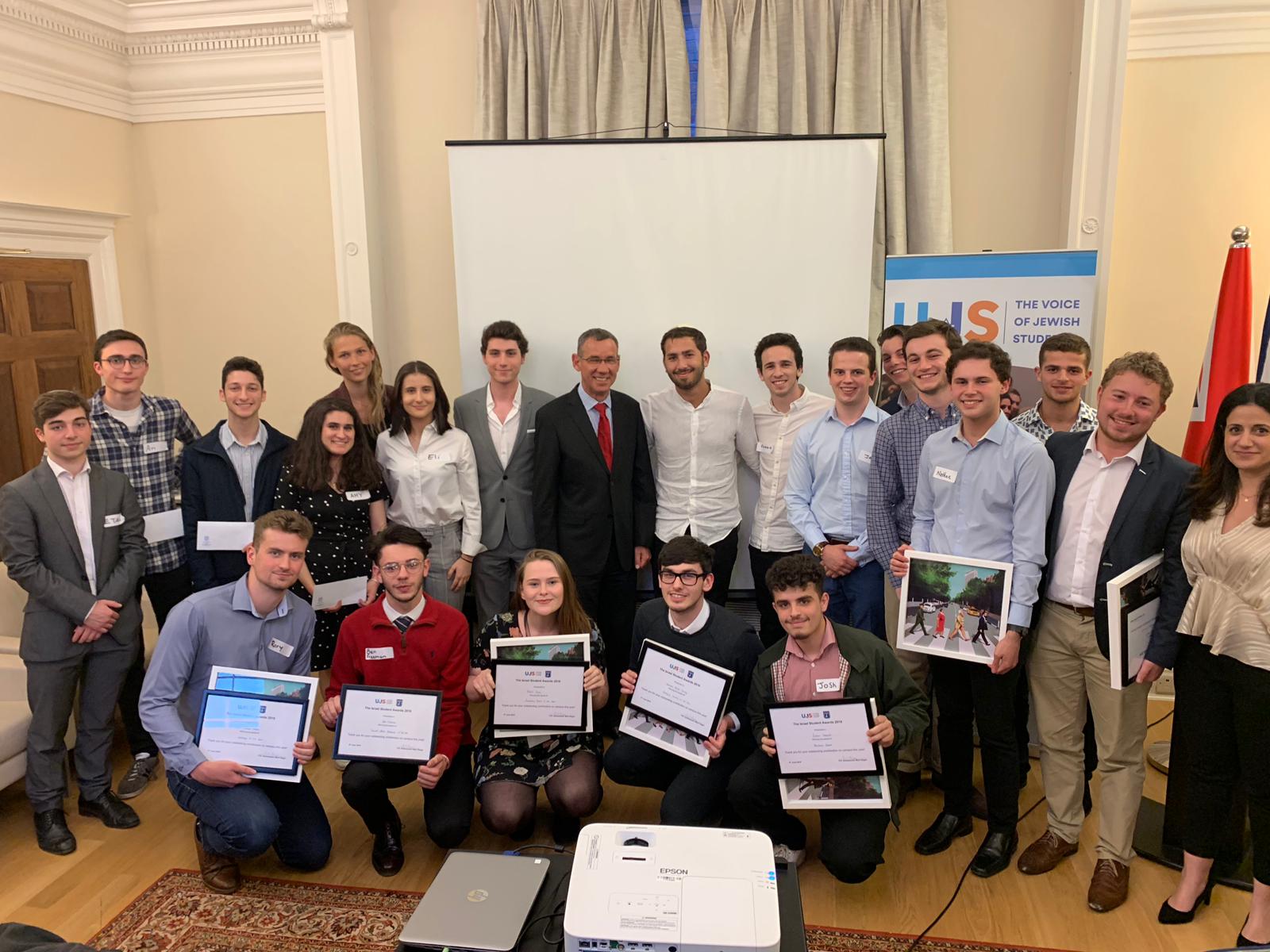 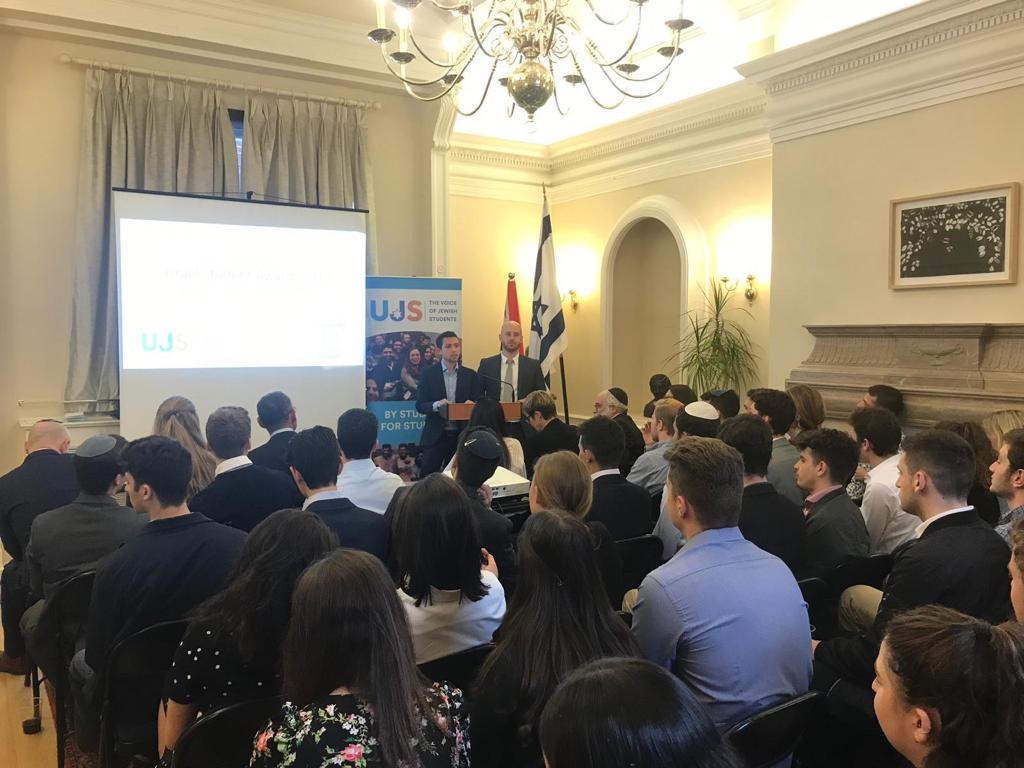 UJS are proud to support Jewish students in engaging in a range of different political perspectives with a diversity of connections with Israel. To find out more about our diverse Israel programming, from the political to the cultural, please email [email protected].