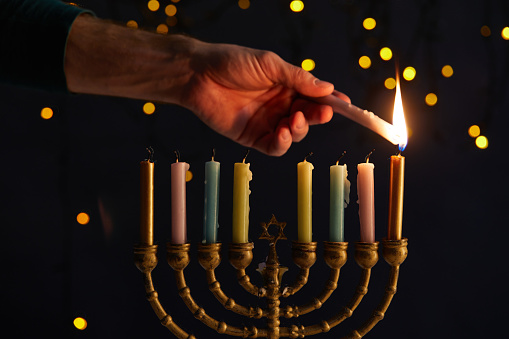 Why do we light candles on chanukah?

The only mitzvah (commandment) associated with Chanukah is that of lighting the candles. The mitzvah has three levels to it: the basic level of one candle per household per night; the more beautified, mehadrin level of lighting candles according to the number of people in the home per night; and the highest level, mehadrin min mehadrin, of increasing the number of candles per night. Regarding the most scrupulous level, which is the level Jews keep to today, there is a machloket (argument) between beit Hillel and beit Shammai. Beit Shammai holds that on the first night eight candles should be lit and are reduced until just one candle is lit on the last night of Chanukah, whilst beit Hillel holds the opposite – increasing the number of candles each day from one to eight, which is the opinion followed today.

The Talmud explains that both beit Shammai and beit Hillel base their rulings on two reasons. Beit Shammai focuses on the remaining days of the holiday – by lighting eight candles on the first day, one can look forward to the eight days to come. This view seems to make perfect sense. The ‘opening night’ of a festival is traditionally the most special and sacred of all the nights, for example we are only actually obligated to eat matzah on the first night of Pesach, or sit in the sukkah on the first night of Sukkot. As the festival progresses, the excitement diminishes, as do the number of candles on beit Shammai’s menorah.

Beit Shammai’s ruling also follows the model of the additional offerings on Sukkot, when one less bull is sacrificed each day, going from 13 bulls to 7. The cumulative number of bulls, which is 70, represents the 70 nations of the world. By mirroring this process, beit Shammai sees the great possibility of Jews and non-Jews coming together in harmony, starting by lighting eight candles to reflect the many different and separate nations, and ending in lighting just one candle, representing the unification of all the nations.

On the other hand, beit Hillel believes that our foundation is the most important thing. We must look at what we came from in order to see where we are going. Starting with just one candle, we build up the number of candles we light each night to represent our growth – we add to the foundation we have built in the previous days. Beit Hillel focus on the number of days already observed, rather than the days to come. Their ruling is also based on the statement that ‘one increases in matters of holiness, and does not diminish’. Jews around the world follow beit Hillel’s opinion because it is better to start with limited expectations and to slowly exceed them, one candle at a time.

Our sages tell us that in the time of Moshiach (the Messiah), Jewish law will follow the opinion of beit Shammai. In these times, beit Hillel’s viewpoint is appropriate for us, as we must work on ourselves little by little in order to build up our greatness. When Moshiach comes however, the potential will finally exist for humanity to come together in peace. Only then, when we will be on a higher level, will we be capable of following the opinion of beit Shammai.

Have a great Chanukah!