The latest comments from Professor David Miller of Bristol University fit into a pattern of behaviour relating to Jews, Israel and Zionism that has brought us to the point where many Jewish students are distressed by his actions and concerned by his ongoing behaviour.

On Thursday 18th of February 2021, following a request from a journalist for a statement from David Miller, the email below was sent and then published; where he claims JSoc's make Arab and Muslim students 'particularly unsafe'. He also added that Jewish students were being used as “political pawns by a violent, racist foreign regime”. 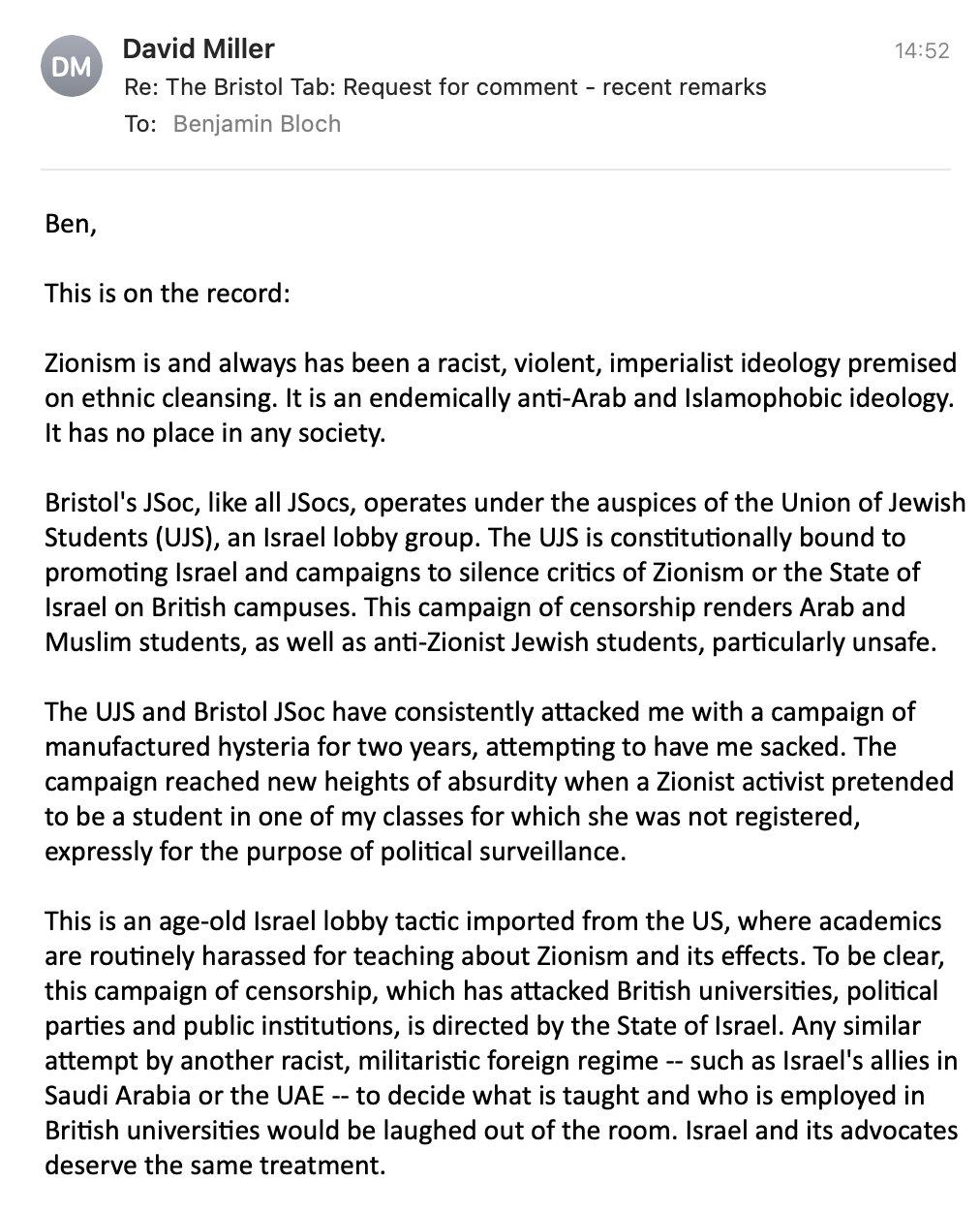 On Saturday 13th of February 2021 Miller spent almost 10 minutes talking about Zionism as “the enemy” during an online public meeting and saying the following:

“As some of you will know I’ve been attacked and complained about by the head of the Bristol JSOC the Jewish society along with the president of the Union of Jewish students who are…both organisations of which are of course formally members of the Zionist movement, JSOCs are all part of UJS, UJS is part of the World Union of Jewish Students which is a direct member of the World Zionist Organisation. UJS and in its constitution, UJS of course mentions being pro-Israel. So those kinds of complaints are being made across the country in different places there’s been one against me in Bristol there’s been one made in Warwick again made by a UJS or JSOC person and there have been several others… the complaint against me was about a lecture that I gave on Islamophobia where I said that one of what I’ve called the Five Pillars of Islamophobia is parts of the Zionist movement. Now this is simply a matter of fact, the Zionist movement, parts of it are engaged in deliberately fostering Islamophobia, it’s fundamental to Zionism to encourage Islamophobia and anti-Arab racism too.”

In late 2020 the Campaigns Officer of Bristol Jewish Society wrote about Professor Miller in the student newspaper The Tab, an extract of which can be found here:

“A Jewish student in his class, who spoke on the condition of anonymity, said: “I was one of the only Jewish students in David Miller’s class. Honestly it was scary because he is a teacher so people believed the anti-Semitism he was spreading. I was scared because I am one voice and felt I couldn’t stand up to him or tell him what he was saying was wrong.”” And then the author added: “In my role as Campaigns Officer of JSOC I have listened to the concerns and fears of Jewish students. I have watched with frustration as the University of Bristol has time and again failed these students. I hope that Bristol will take this problem seriously. With that in mind, I’ll make one final plea to Bristol: Get David Miller off of my campus.”

In August 2020 Professor Miller said to The Jewish News “The CST received £14 million this year from public funds. This is an organisation that exists to run point for a hostile foreign government in the UK. Rather than being funded by the British state, it should be under investigation for its ties with the State of Israel. This is a straightforward story of influence-peddling by a foreign state. In particular, a state that has tried to dictate the outcome of the past two general elections, and by any yardstick, succeeded to a great extent.”

In July 2020 at a meeting entitled “Defence of Free Speech” Professor Miller said that CST is "at the forefront of pursuing the witch hunt. A group which is unable to distinguish between anti-Zionism and antisemitism which purposely blurs together those two concepts in order to pursue the left, that’s been its raison d’etre… since it was created".

“The Zionist movement and the Israeli govt are the enemy of the left, the enemy of world peace and they must be directly targeted". He also called the British Government “the enemy”.”

In February 2019 David Miller gave a lecture at Bristol University as part of his course on “Harms of the Powerful” that left Jewish students in his class feeling “uncomfortable and intimidated”, according to one complaint submitted to Bristol’s vice-Chancellor via CST. A powerpoint presentation used by Miller for the lecture described his view that parts of the “Zionist movement” are one of the “five pillars” of Islamophobia. It featured this slide depicting a complex web of Jewish organisations, charities and philanthropists under the heading “Israel government”. In the context of a lecture claiming that parts of the “Zionist movement” were knowingly fostering Islamophobia, the implication was that mainstream UK Jewish community organisations and individuals were involved in this activity, under the direction of the Israeli government. 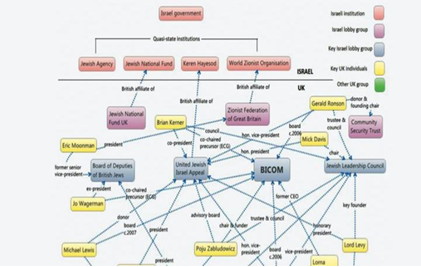 Jewish students said they felt that, taken as a whole, his lecture was reminiscent of “anti-Semitic language, tropes and conspiracy theories”. Professor Miller has strongly denied any allegations of antisemitism, but it is believed that he removed this slide from his presentation before delivering the same lecture in 2020.

In February 2021 Miller said, in relation to the complaints about this lecture: “The pressure they are mounting here is to try and get us to stop teaching this stuff, to stop writing about it and speaking about it in public, and indeed to stop researching about it.”

In 2018 it was reported that Professor Miller made the following comments at an event held in central London: “it’s absurd if Jews genuinely feel unsafe as a result of Palestinian rights, well then you’ve got to ask questions about who they are and what they’re talking about. It’s not Jewish students who feel unsafe, it’s specific Jewish students who are part of a particular political tendency who are saying that they feel unsafe.”

“these are not students who are spontaneously threatened” “it’s propaganda which they have been schooled with… there are organisations, Israel lobby organisations, Zionist movement organisations, some allied to the Israeli government, who have devoted huge amounts of time to do messaging to working out how to combat, in particular, BDS.”

In September 2015 Professor Miller gave a lecture at a conference organised by the group MEND. They tweeted a photo of one of his slides which makes the claim that “Ultra Zionist funders” and several Jewish communal organisations are “the fourth pillar” of his 5 Pillars of Islamophobia: 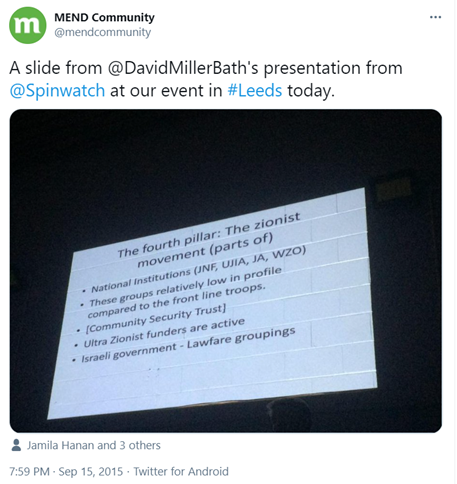 In June 2015 Professor Miller co-authored an article entitled the 5 Pillars of Islamophobia that claims “We also need to focus our attention on elements of the (also transnational) neo-conservative and Zionist movements which provide information, ‘research’ and advocacy which can drag the state and politics to the right and sharpen Islamophobic polices, as we have seen in the UK with the revision of the ‘Prevent’ programme in 2010 (drawing on the material of the neo-conservative Centre for Social Cohesion) and in the Counter-Terrorism and Security Act 2015.”