How Jewish Students are Creating Their New Normal

(As seen in the Jewish News, 5th November - https://blogs.timesofisrael.com/how-jewish-students-are-creating-their-new-normal/)

I know many people believe in-person campus activity now is non-existent because of Covid-19, that people are not meeting and consequently Jewish students are not mingling. This could not be further from reality.

In a sense, we should not be surprised. For more than 100 years of Jewish university life, activity on campus has continued, stubbornly surviving two world wars, a series of devastating recessions and global health issues. 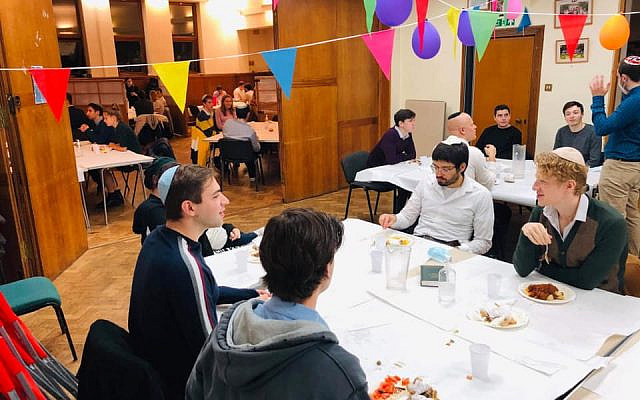 The coronavirus pandemic is just the latest obstacle Jewish students have had to navigate to guarantee the continuation of vibrant and exciting activities and initiatives, and they are doing so by adapting.

Whereas previously the Jewish Society (J-Soc) was primarily a social space, one where to meet new people and catch up with friends, its function has now expanded, redefining decades of tradition.

As UJS president I have learned that, no matter what, Jewish students will persist in making life on campus thrive and adapt to the times in which we find ourselves to create a ‘new normal’ of their own.

Fascinatingly, the J-Soc has morphed into a major support mechanism for Jewish students, providing invaluable spaces to connect with their Judaism in new ways while attempting to sustain some semblance of the ‘old normal’ by holding socially-distant, in-person events.

One such support mechanism is the innovation of a J-Soc ‘family’ system like in Bristol, whereby incoming freshers can meet fellow first year students while also being assigned J-Soc ‘parents’ – older students who freshers can go for support or just a friendly face.

Navigating this part-virtual, part-physical, hybrid campus has been, and remains, a challenge. But with this, and the many other challenges of the past few months, there have also been exciting opportunities to drive Jewish student engagement into a new digital age, the likes of which have never been experienced on this scale.

Ironically, though, in an age of technological dependence (whether by habit or necessity), I have found the following a difficult question with which to grapple: While students are spending their entire lives online, can we really expect them to sit in front of a screen for yet more online J-Soc events?

Again, they are adapting. At King’s College London J-Soc, for instance, students hosted an incredible online event focused on the plight of Uyghur Muslims, as well as arranging a socially-distant hike in groups of six, which would likely not have occurred in this weather if students had not been craving a degree of engaging programming and a break from their screens.

Likewise the small J-Socs, often known for demonstrating the epitome of familial atmosphere, have replaced their previously tight-knit gatherings with virtual social events, such as at Queen Mary University, where the J-Soc coordinated virtual pub quizzes and online games nights to sustain that same sense of community.

In all this, there are some pleasing constants, not least that famous desire for a Friday night dinner – a defining feature of many a Jewish university experience.

Yet where previously hundreds would descend on an in-person Friday night dinner in Birmingham, for instance, now those same students celebrate Shabbat like never before – with hundreds of takeaway meals and Shabbat packs provided.

It flips the concept on its head, from an in-person collective to celebrating in far smaller groups, and I know J-Socs are toiling to make it work – Southampton J-Soc committee spent hours cooking into the night.

From Southampton to Sheffield, London to Leeds, Bristol to Birmingham, determination and ingenuity will keep Jewish activity on campus alive.

For now, at least, J-Socs are going nowhere.