Though the past six months at the helm of UJS have certainly been anything but normal, I have been blown away by the tenacity and perseverance of Jewish students across the country. Whilst many saw this year as being a write-off for Jewish life on campus, the reality could not be further from that, and I am proud to represent the 8,500 Jewish students in the UK and Ireland and their J-Socs who have not just been surviving, but thriving, creating new and more innovative ways than ever before to engage with their Judaism.

Being a student now is not easy, but the determination of Jewish students to see Jewish life on campus booming has been admirable.

Going Digital to Enhance the Future

In the past six months, our content has reached the screens of more than a quarter of a million people – to be clear, that is more than 250,000 people having seen, interacted with, or shared our content in the past six months. Our growing digital network of students and friends ensures that the transition to more digital engagement has not meant that people switch off from UJS, but that people are increasingly active online – we have not just gone digital out of necessity. We have continued to enhance the digital face of UJS, significantly, for future generations of Jewish students.

Though in planning for Conference we faced much adversity, least of all that we were not able to be in person, we 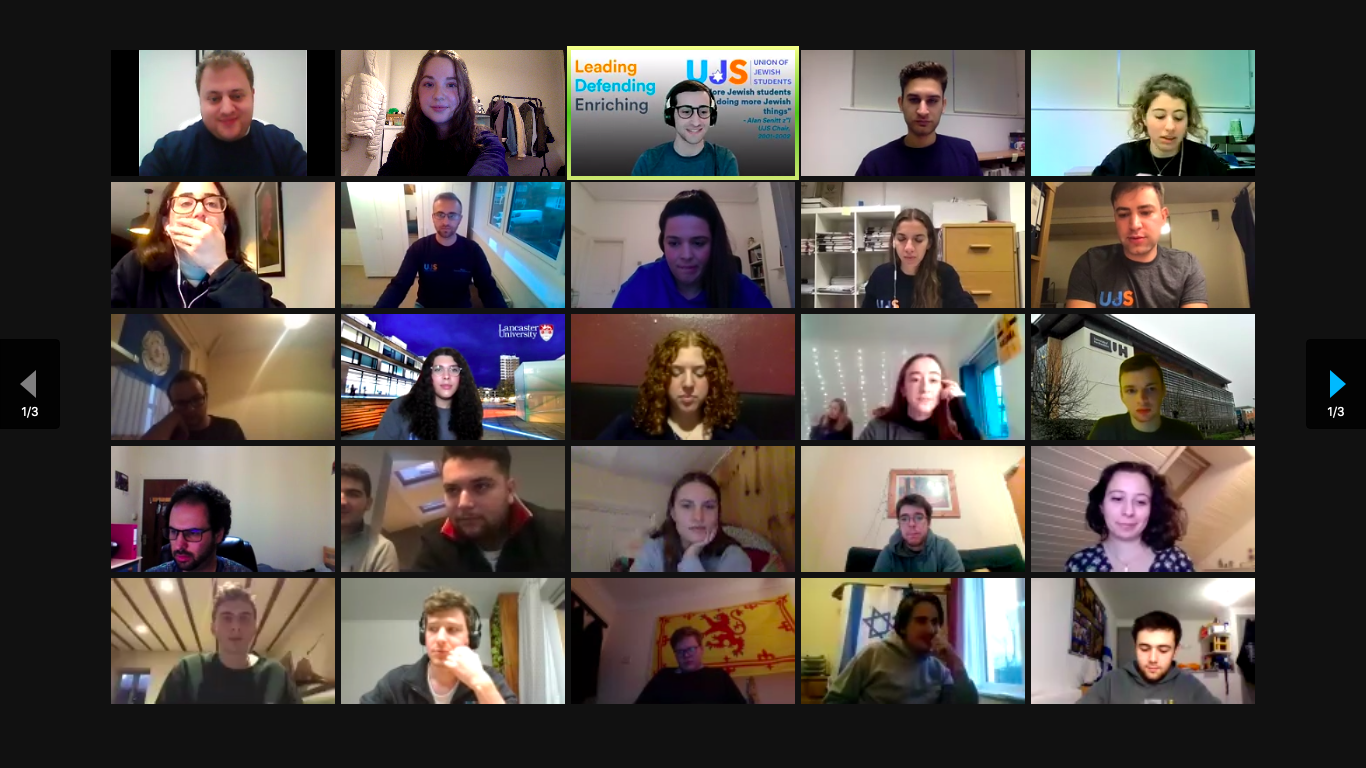 were pleased this year to have UJS’ first ever digital policy Conference. Not only was it spread across 3 days, but there were also more motions proposed than ever before, encouraging everyone to participate in healthy and well-spirited debate and dialogue around a range of different issues. What has been clear is that despite the times, Jewish students care about the continuation of their democratic union.

Amongst the many motions passed included a reaffirmation of our commitment to a negotiated two-state solution, the mandating of UJS to fight against all forms of antisemitism and standing in solidarity with refugees and asylum seekers.

It was such a great personal achievement for me to play a part in running UJS’ first ever digital Conference and am looking forward to learning from this experience to improve on the successes of this year!

When Jewish students have often been so physically distant from each other and from the ability to develop their skills as activists, we have been engaging them by empowering them with transferrable skills that they can use on and off campus. This has been done primarily through our digital masterclass series, which aims to teach students skills such as public speaking, lobbying your University and Students’ Union, all of which can be used later on in a life of advocacy and activism. The digital masterclass series has engaged thousands of students to date in developing their skills for life after university.

UJS conducted a landmark Freedom of Information request investigation which revealed that out of the 133 higher education institutions, only 29 had adopted the IHRA definition of antisemitism. To our knowledge, 43 institutions have now adopted the definition, symbolising a significant step in protecting Jewish students across the country.

Not only this, but through our lobbying and the hard work of Jewish students on the ground, the government set a deadline of Christmas by which universities have to adopt the IHRA definition before the government considers imposing sanctions on those institutions. We will be advising the government in the coming weeks of suggested policy implications for universities that do not listen to the overwhelming view of Jewish students and of British Jewry and adopt the definition.

In the last six months, our campaigns team have been virtually travelling the country, delivering tailored training to over 1000 staff and sabbatical officers of approximately 50 institutions. The aim of this program is to equip them with the knowledge and skills to call out antisemitism on campus and support their Jewish students.

Putting the ‘J’ in UJS 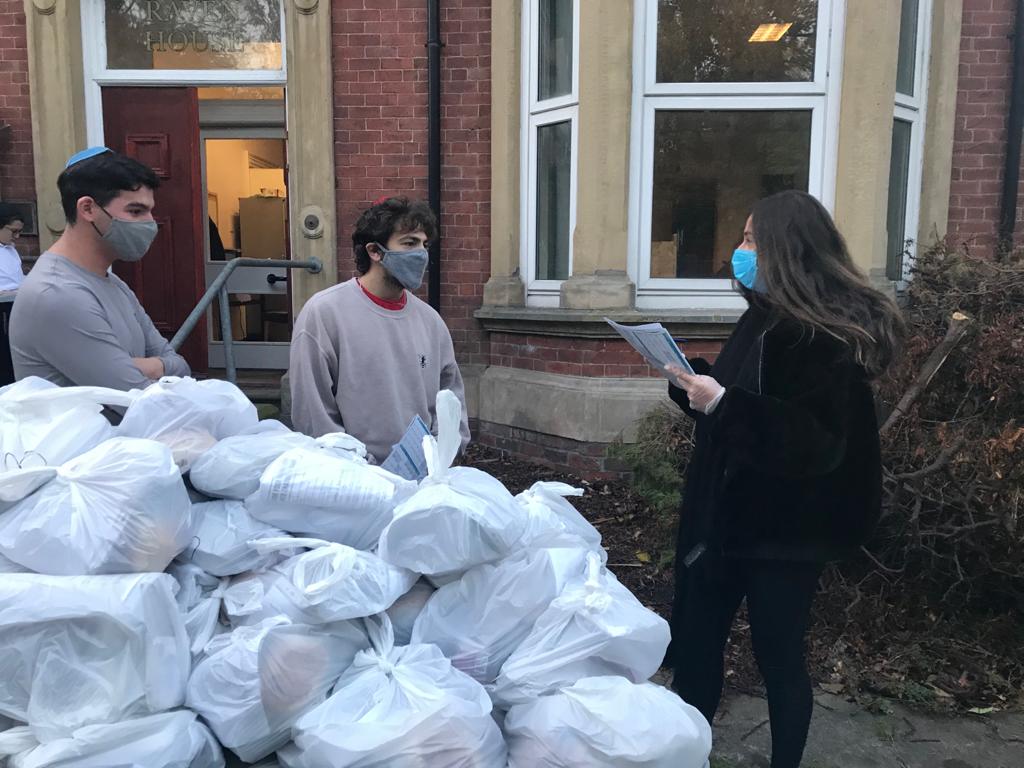 We have continued in our peer led, weekly Divrei Torah, and have engaged, in some way, over 28,000 people in the last six months alone. The inspiration that Jewish students have shared, especially in such challenging times, has been truly amazing to watch, and we are looking forward to seeing this project continue into the future!

Not only this, but we have been empowering our J-Socs to take on active roles of leadership on their campuses, promoting the idea of being a ‘dugma’ (exemplar) to their community. This might include running social action campaigns, fighting antisemitism, or educating the wider community on the State of Israel. Jewish students have been leading the way in vibrant and diverse activity on campuses across the country, and long should that continue!

Coronavirus has hit students hard. Amongst the thousands of students across the UK who have had to self-isolate, there have also been a large number of Jewish students included in this too. We know that many students in this difficult situation have been struggling with obtaining basic necessities, but I am proud that we have been here to support those who needed that urgent and direct support.

From students not having access to kosher food, groceries, laundry facilities, or medicine, we ensured that every student that came to use was provided with tailored and effective assistance within 24hrs of contacting us for support.

Our aim has consistently been to ensure that ultimately, Jewish students are protected and supported throughout this difficult time, and that we come together to support our micro-community within the wider student, national, and Jewish communities.

One of the most significant issues of social injustice in the world facing a minority group is the genocide of Uyghur Muslims in East Turkestan / Xinjiang. This has been a concern of Jewish students for months. By raising awareness of these issues through our J-Socs and on social media, more pressure can be put on those institutions who stand by whilst millions of Uyghurs are ethnically purged from their native homeland.

During Interfaith Week, we launched our campaign for solidarity with the millions of Uyghur Muslims in East Turkestan / Xinjiang. Education is a huge part of taking action on this important issue – the more people that know about these atrocities, the more direct action can be taken against those who exploit Uyghur Muslims for slave labour, funding the continued genocide in the region by the Chinese Communist Party.

We have been working with René Cassin and others to ensure that the Jewish voice in support of the Uyghurs is heard loud and clear – we call on leading retailers and on policy makers to ensure that society does not benefit from the perverse crimes of the Chinese government perpetrated against Turkic and Muslim-majority peoples.

This year is both different and challenging, but in the face of difficulty, I am blessed to be the Covid President.  This year is the year that we have been able to completely rethink the way that we directly support students. Obviously, the pandemic has compelled us to embrace the digital age, but out of the challenges that this represents, the incredible opportunity presented itself in engaging more students than ever before. My UJS journey begun by wanting to make long-lasting change, campaigning for a better campus for Jewish students in years to come. Over the last six months, Jewish students have been taking part in campaigning on issues that matter to them, have been pioneering bold campaigns affecting long lasting and positive change for the improvement of Jewish life on campus for Jewish students both now and far in the future.

We are already preparing for the next six months of providing diverse and enriching activities as well as dedicated support for our nearly 70 J-Socs – if you do have any ideas, please do reach out to me.

I want to take this opportunity to wish everyone a restful break and a happy new year!