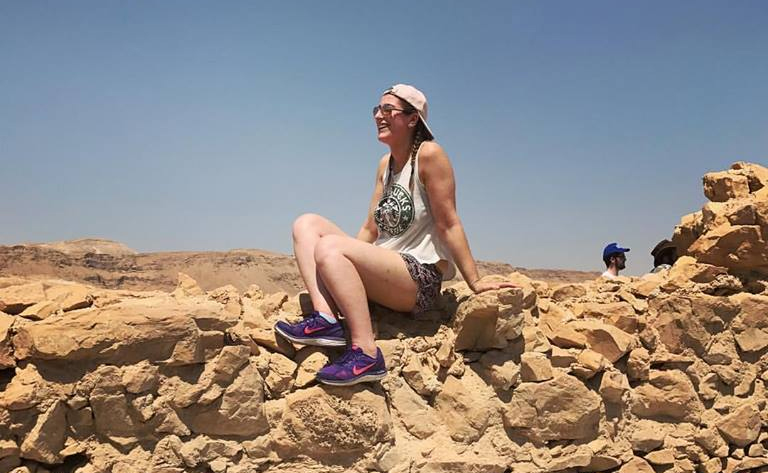 My younger sister recently began her IDF service. She is currently completing various training components before she goes out to be a combat soldier until 2020… And yes, I'm proud and terrified in equal measure. Her training programme keeps her on base during the week, returning home to rest each Shabbat. She was therefore not at home when I arrived at my parents’ apartment on Sunday afternoon, having just completed a week unlike any other. I promise that my sister’s absence on that day will become relevant soon.

As the co-leader of The Real Deal, one of UJS’ newest trips, I had just completed a kind of mash-up of Manhigut, UJS’ flagship trip for political activists, and Israel Tour. With 17 students from a diverse range of backgrounds, the majority of whom had never been to Israel before, I had just completed an intensive crash course in which participants grappled with the many issues compressed into the relatively small space of Israel and her neighbours: geography, politics, class, religious coexistence, history, extremism and so much more.

We learned experientially, visiting Masada to learn about ancient Jewish connections to Israel and Rawabi to see Palestinian self-determination. We toured Yad Vashem and Mount Herzl, observing the physical link between these sites that cements the ideological one. We gathered on Temple Mount to discuss the metal detectors recently installed there and we were sobered by the blasts reverberating from Syria as we stood in relative safety just a few hundred metres away. We walked through a giant caterpillar-shaped bomb shelter in Sderot, where the brightly coloured paint could not mask its purpose in sheltering Israeli civilians, and we listened to the hopes and fears of coexistence project leaders in the West Bank.

Israel is a small country, but it would not have been possible to learn about Israel’s early socialist movement whilst staying on Degania, the first ever Kibbutz, in the North and hike through Ein Gedi in the desert on a single day if we had not spent several hours on a coach. This is where my sister becomes important to the story.

Because she had already returned to her base and would not see me when I got to my parents’ apartment, she had left me a note on my bedroom door, in which she had written (amongst other things): ‘I hope that as a trip leader, you were able to help show the students on your trip that we have a beautiful country.’

Reflecting on her words, I realised that actually, I did not do this at all. Rather, the students showed me how beautiful Israel is.

As we had driven through the changing landscapes of a country I take for granted, I had invariably been in discussion with the tour guide, my co-leader or a group of students. Yet as the week progressed, I noticed that the participants were constantly looking out of the window, often with their cameras or phones pressed up to the glass.

All at once, I realised that the rolling hills, bleached stones, crashing waves and vast sand dunes are incredible. Mah rabu maasecha HaShem – how great are God’s works! As a frequent visitor to Israel, I had forgotten to slow down and look out the window, whether on Route 6 through Tel Aviv or the winding roads around the hills of Jerusalem. Yet as I became friends on Facebook with the incredible students on my trip, my news feed filled with the most gorgeous shots of places I had long forgotten were anything special. Looking at cliffs with skyscrapers in the backgrounds and close-ups of the salt crystals of the Dead Sea, my heart swelled with a re-found love and appreciation for the country I am so blessed to call my own, along with so many others.

In fact, choosing a single landscape photo from the trip to accompany this blog was a real challenge. In just seven days, we took in so many vast and intricate natural and man-made structures; waterfalls, rivers, grass, metal, bleached stone, sand and cliffs in a single glance.

I embarked on The Real Deal as a leader, ready to help students discover new perspectives on Israel, Palestine and the surrounding areas. I knew that my own understanding of the conflict would continue to evolve on the trip, as it has done over the past several years, and I never pretended to have all the answers. Indeed, with the teachings of Rabbi Hanina in the Talmud (Ta'anit 7a:12) in mind, I anticipated that the questions, thoughts and observations of the student participants would teach me new things, equal to that which I hoped to share with them of my own. But I did not expect to be educated by my students in something as simple as the beauty of the Israeli landscape, and I am eternally grateful to all of them for giving me back the love I didn't know I'd lost.

Summer U 2017 - an unforgettable experience!

Israel through a new lens: my experience on The Real Deal