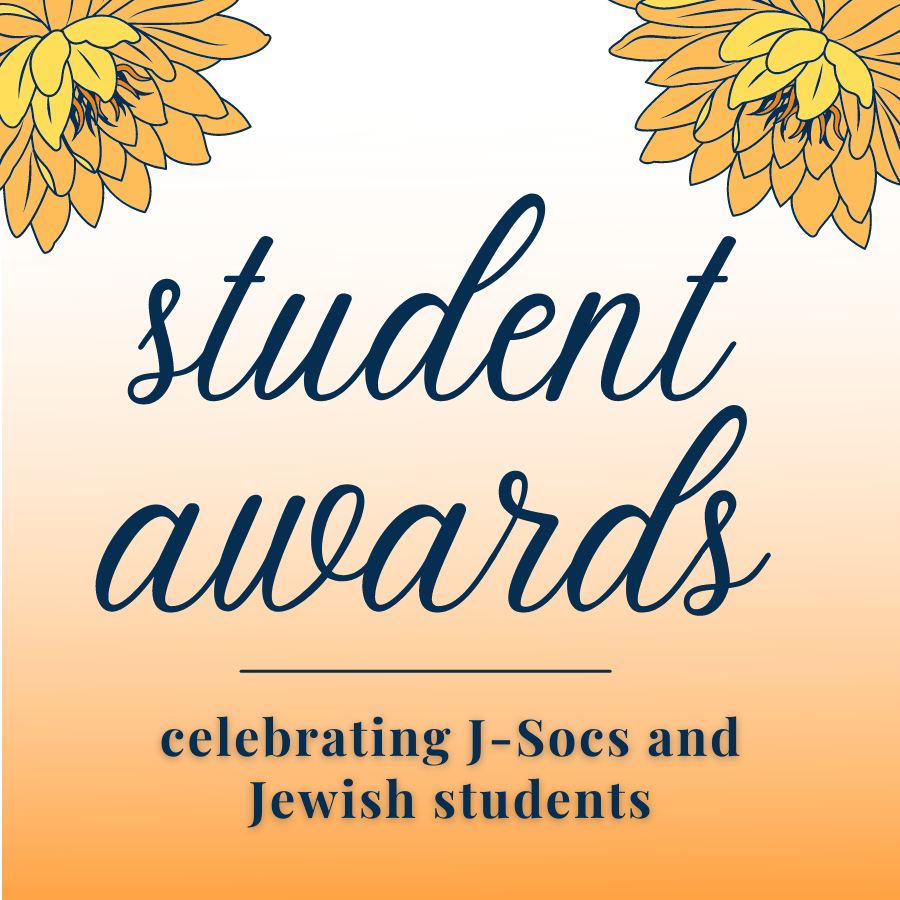 Last night (25th April) we hosted our 13th Annual Student Awards, celebrating the exceptional work of Jewish students up and down the country over the past year. Over 150 people viewed the event live, hosted on Facebook and Zoom, celebrating Jewish student life on campus, recognising the incredible hard work and difference made by students!

“Jewish life on campus this year has not just survived, but thrived. I have such huge admiration for every single student who has made this year of challenge and adversity one of diverse, rich, and positive activity for Jewish students. When most Jewish life on campus almost came to a complete halt just over a year ago, Jewish students, supported by UJS, were determined to continue succeeding.” James Harris, UJS President

It was amazing to see such a turn out on what is really a crucial and staple UJS event. Once again a huge congratulations and Mazel Tov to all the winners:

Also a huge congrats to all our fantastic nominees!

Here is a little more information on all the winners:

Education Project of the Year was won by Miriam Makin & Mia Shindler of Durham J-Soc. This year as, a result of the Covid-19 pandemic, nearly all of Durham J-Soc’s events have been online. Miriam and Mia, through their hard work and commitment, hosted a meaningful, emotional and insightful Holocaust Memorial Day event despite the inability to meet in person. They hosted a zoom webinar with guest speakers Noemie Lopian, the daughter of Holocaust survivors, and Derek Niemann, the grandson of an SS Officer. Noemie and Derek shared their stories together, and provided an insight into the perils of extremism, and highlighted the importance of greater understanding.

King's J-Soc was the proud winner of the Interfaith Project of the Year award. Throughout this year, King's J-Soc have been raising awareness of the persecution of Uyghur Muslims in China. By working with UJS and the World Uyghur Congress, KCL J-Soc hosted a discussion with members of the Uyghur community, bringing both Jewish students and Uyghur Muslims together to hear first hand accounts about the persecution occurring. J-Soc's efforts in interfaith have successfully brought people of faith together to discuss shared persecution.

Social Action Project of the Year was awarded to Toby Kunin from Warwick J-Soc. Toby has been at the forefront of GRT-Jewish solidarity efforts this year. He has spearheaded, alongside others, a dedicated group of Jewish students who want to fight with the GRT communities against discrimination and the harmful effects of the Policing and Crime bill in its current form. To this end, he penned an open letter for the Jewish community to sign to work against the bill, which received over 700 signatures. He went on to write in the Jewish News about why our community should stand in solidarity with the GRT communities.

Noah Katz of Lancaster J-Soc was presented their award of Liberation Activist of the Year by Matt Lucas. Noah is an outspoken advocate for better LGBT+ representation in media and in J-Soc. In February, they hosted a UJS event with a group of students to discuss what better LGBT+ inclusion looks like in J-Socs. Noah also hosts a weekly radio show at Lancaster called ‘Queer on Camp’ Saturdays at 3pm. The show takes a look at contemporary queer and camp culture in music, new media, and other medias.

An award for Israel Engagement, in partnership with UJIA, was jointly won by Imperial and LSE Israel Societies who came together this year to launch a new competition called The Start Up Nation Challenge. A cross-university initiative uniting Israeli and British students. The two societies teamed up with IDC Herzliya and Technion with the aim to connect young entrepreneurs from the best universities in the UK and in Israel to build a coherent project by getting guidance from entrepreneurs.

The winner of the Campaign of the Year, in partnership with CST, was won by Ed Isaacs and Bristol J-Soc. This award was presented by Rachel Riley, who was "honoured to award the future of the Jewish community". Edward Isaacs was commended for "his hard work, dedication and resilience in organising the ‘Hate off Campus’ campaign in Bristol". This campaign began after Ed was targeted by an academic at Bristol just for being Jewish. Throughout the campaign he has led Bristol Jewish students and supported them, lobbied the University and organised a virtual rally to highlight the issue.

Birmingham J-Soc, winning Event of the Year award, pioneered a nationwide J-Soc Valentines Day event, inviting hundreds of students to take part in a social and dating meeting up online to raise money for Save a Child's Heart's new hospital wing in Israel. The event was a huge success, allowing people to "meet" virtually.

This year has been hard for all and students have endured a hard and challenging year through restrictions, virtual learning and lockdowns however, this did not deter our amazing students. This new award, Keeping Jewish Enrichment and Engagement Alive for Students during the Covid-19 Pandemic, was presented to Nadia Goldman who as J-Soc president has consistently supported Jewish students during the pandemic, supplying them with Shabbat packs on a weekly basis. Throughout this year, Birmingham J-Soc has given thousands of packs to Jewish students in Birmingham allowing them to engage with Shabbat regularly and in a Covid-secure way. Birmingham J-Soc should be proud of their ability and success in keeping Jewish engagement alive and active for so many Jewish students.

The brand new award for Maurice Helfgott Award for Leadership was jointly won by Joel Azulay of Queen Mary J-Soc and Joel Rosen of Cambridge J-Soc. Joel Azulay as president has taken the J-Soc to new heights. Despite being relatively small, he has run multiple virtual nationwide events, two of which had an average attendance of 40 students from across the country, and most recently a nationwide Purim event joint with UJS and Chaplaincy complete with a Megillah reading and cocktail making, which was attended by 180 students. For Hanukkah, Joel organised the first ever public in-person Hanukkiah lighting at Queen Mary's. Joel has also been at the forefront of efforts to have IHRA adopted by both his University and his Student Union. Joel Rosen, in his role as external affairs officer for Cambridge J-Soc, has taken a leading role in getting the IHRA definition adopted in Cambridge and its constituent colleges. He forwarded the motion to support the adoption by the University at Cambridge SU and subsequently organised the adoption with a team of Jewish students at the 30+ colleges in the university. This is a complex process, as each college has a different governing body and difficult constitutions that changes the way in which motions of this nature can be passed. However, these were navigated skillfully by Joel: in some colleges referendums had to be held, whilst in others a simple majority vote at the JCR (the college student union).

The Alan Senitt Outstanding Contribution to Campus Life award was won by Dominic Casoria of Lancaster J-Soc. Dom has been determined through all 3 years of his university to improve Lancaster Jewish community life. He has been on Lancaster J-Soc since the second month of his university and has been on for 3 years even serving as president. He has campaigned for the university to adopt the IHRA definition of antisemitism and has created a friends of Israel society at Lancaster. He has worked tirelessly as a StandwithUs Emerson fellow to put on Israeli educational events and has really proven his dedication to Jewish life on campus throughout all three years. He has worked with UJS tirelessly to educated hundreds of students on campus on antisemitism. There is no student more dedicated to student life on campus than Dom.