Terry was 17 when she was taken to Auschwitz. When the Germans came to Budapest Hungary in March 1942, Terry’s life changed dramatically. From then, Terry began to see German soldiers marching through the city. Soon after, she had to stop going to school as her parents were scared that the Germans would take her away to the camps without their knowledge.  Many people began to disappear, so after a while her parents said that she couldn’t go anywhere. The situation became terrible as restrictions were imposed, and they had to start wearing a yellow star. In May 1944 Terry and her family were ordered to go to a ghetto in the outskirts of Budapest. They lived in a house which was very small and without a toilet – herself, her mother, father and sister were all in one room. They moved in on the Friday and by Saturday morning the guards announced that they were going to take them away. Her parents were collapsing in the soil. At 17, she had grown up. During the night she tore her bed covers into little pieces and sowed a little sack for her sister so that she would be able to carry some food.

When the time came to march out of the ghetto, they marched to a quarry near Budapest. In the quarry they were waiting for the wagons to take them to Auschwitz. They were in the open-air and there were no buildings, so all the Jews were crowded in the quarry. Luckily, Terry had the foresight to have a blanket between them, so they could sit down on the grass under the blanket. They had to wait three days until they were taken in wagons to Auschwitz, which were crammed with people. There were no toilets and people were sick. They had no help.

When they arrived and the doors opened, suddenly people were shouting ‘Get Out’ in German. Terry could see German uniformed people and lots of striped clothed men who were coming over to get them out and take all their belongings. They jumped out, and straight away they said, ‘men that way, women that way’. She couldn’t even say goodbye to their father, the German soldiers wouldn't let her stop. The next step was to organise the woman, where Terry received her uniform – This was the selection process. She soon realised that her mother and her sister were no longer behind her, so she stopped and shouted, ‘Mum, where are you?’. She shouted everywhere for them. A soldier came up to her and told her to walk straight up for her mother and her sister. He said that they are up the tracks so that they don’t have to walk with the little ones. Terry listened and was taken down to Auschwitz itself.

Straight away they were taken to the baths. The baths were a huge room and the ceiling was full of holes, where the water came. They only knew much later that they were put there for gas, instead of water.

They got to the barracks and met with the commander in charge, a Polish Jew who had been at the camps for years. She said to Terry and the group she was with there's there is no point in crying, and that they should not wait for their mothers and sisters. She said ’look out, you can see the smoke? That’s where they are going’.  Terry never believed it as she thought that the commander was just a cruel person who said it to upset them. It took a long time for her to believe that it was true.

Terry was freed after a year. Terry believes that it is banal to say that the thing that saved her was her belief in G-d. She always believed that she would be freed, and never thought of dying.

For more information about Terry’s Story: 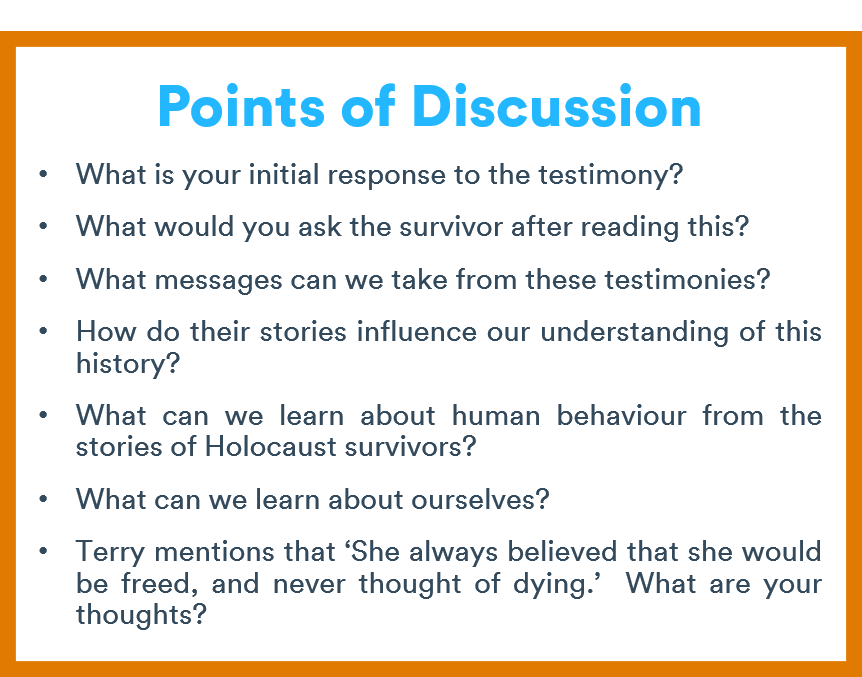