Electric atmosphere at Together in Tune


Electric atmosphere at Together in Tune 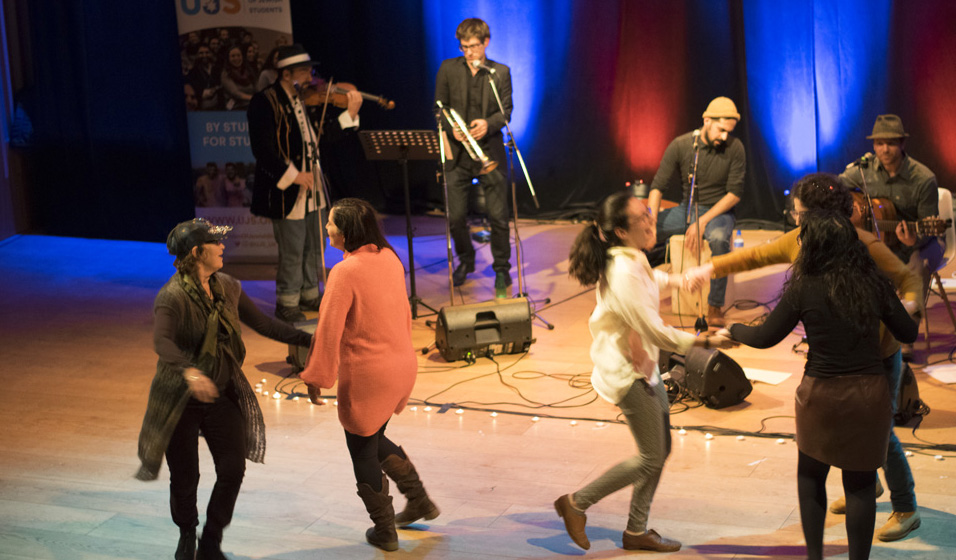 120 guests ranging in age from 10 to 85 gathered for a never-been-seen-before event last night at JW3. Hosted by UJS together with René Cassin and the Jewish Music Institute, Together in Tune brought the Jewish and Roma communities together for a night of music and dance, celebrating and recognising our communities’ cultural similarities. The atmosphere in the room was buzzing and everyone had a fantastic time.

‘We know better than many that minority groups must be recognised, protected and celebrated, and so tonight we will do just that. Music transcends cultural, social, and political boundaries, and as Jews who place strong importance on the value of community, we must be proactive in recognising and celebrating other minority groups such as the Gypsy, Roma, and Traveller communities, partnering in a way that celebrates and acknowledges the similarities of our cultures.’

The event was particularly timely as it took place on the eve of the 70th anniversary of the Universal Declaration of Human Rights. With both the Jewish and Roma, Gypsy and Traveller communities experiencing record levels of hate speech and hate crime in the last couple of years, Together in Tune was an example of the importance of reaching out, building connections and finding strength in solidarity – as Mia Hasenson-Gross, director of René Cassin said in her address. She added:

‘This evening is about breaking down the barriers facing particular groups and the barriers between groups. It is about celebrating our rich history of co-habitation and collaboration between our communities.

‘It is about making sure that it is not our shared experience of discrimination, intolerance and exclusion from mainstream society that brings us together but rather our shared love of good music and dance, and our understanding that only when we stand together in solidarity can we achieve real change.’

Phien O’Reachtigan, co-Chair of the National Gypsy-Traveller-Roma Council, spoke about the significance of the event, pointing to the hostility and harassment often experienced by members of the traveller community and explaining that this is why it was special to be invited to celebrate their culture that is so often misunderstood. He also sung a cappella songs of his own writing, drawing on his upbringing as an Irish Traveller. 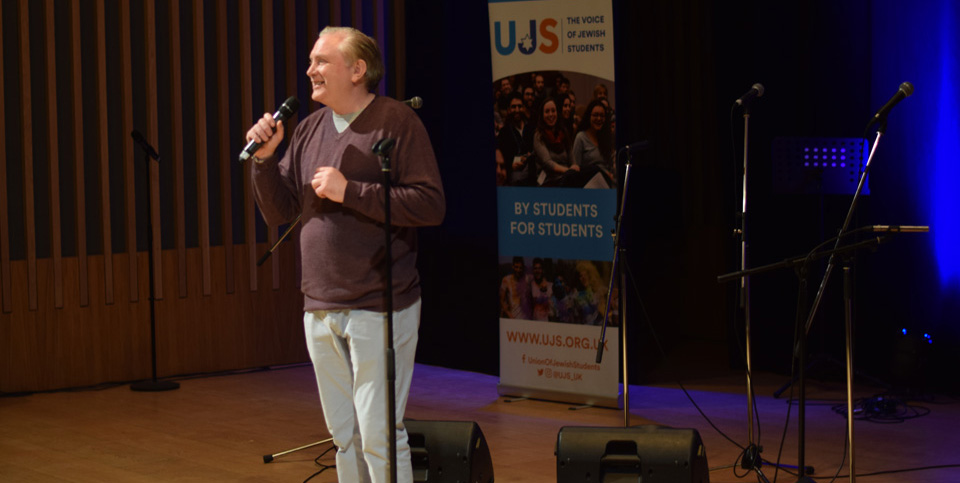 The first performer of the night was Florence Joelle, a Gypsy jazz and blues singer-songwriter who sung traditional Roma anthems and songs of her own creation, including lullabies and romance ballads, in French and English. Florence said: ‘It was a joy being part of Together in Tune, both communities have so much in common and it was an honour to share the stage with Phien O’Reachtigan, Luludinka and Bis Bas. A big thank you to everyone involved in making this event happen, and to a superb, heartwarming audience. I am still smiling.’ 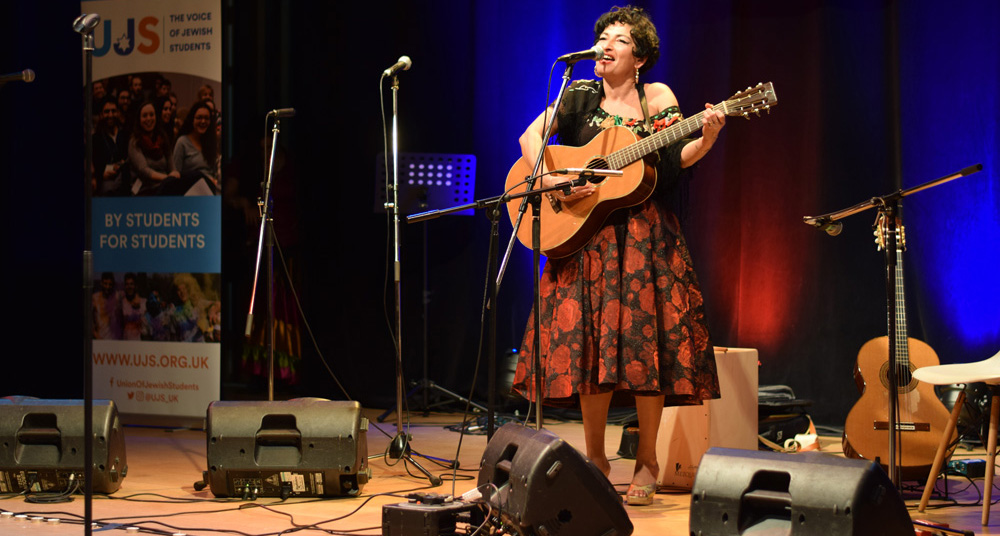 Florence was followed by Luludinka, a Roma dancer who brought members of the audience up to dance with her. Those who did not have the confidence to twirl in front of the crowd were clapping and stamping along from their seats! 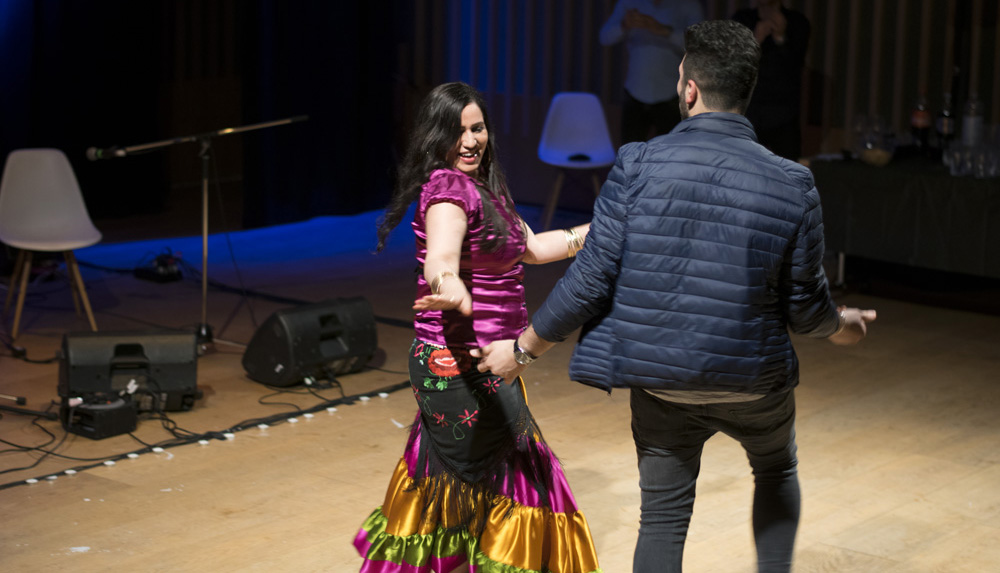 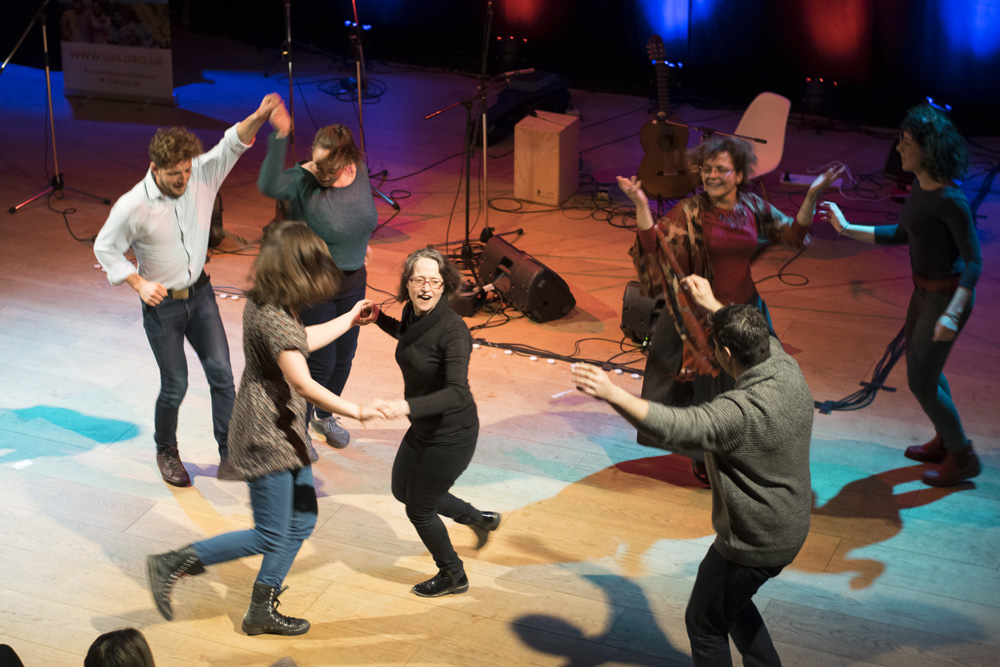 Luludinka dancing with an audience member; the audience getting involved in the rhythm of the music

Following an interval during which wine, sushi and falafel were served, the final performance came from Bis-Bas, a Jewish band whose music is a self-described ‘spicy fusion of Klezmer and Middle Eastern’ styles. Singing in Hebrew and English and playing violin, trumpet and guitar, their performance opened and closed with haunting melodies for traditional liturgies like Yigdal and the Birkat Banim (Blessing of the Children.) In between, they performed songs of their own writing, with lyrics that were poignant and amusing in equal measure; one was about dating in contemporary Jewish circles compared to the songwriter’s grandparents’ story, whilst another song’s lyrics were a literal recipe for chicken soup, with vocalist Jonny Mosesson encouraging the audience to write it down and make it for Shabbat dinner! The atmosphere during their set was electric, with the audience alternately clapping, cheering and laughing during the upbeat tunes, and sitting in silent awe and captivation during the piercing melodies.

Jonny said: ‘It was an honour to share the stage alongside members of the Roma, Gypsy & Traveller community. Musically and lyrically we felt connected to their rhythms and messages, the pain and beauty.

‘As a Jew, I was drawn not only because we both share a past steeped in persecution, but because both communities have a love and culture of celebration and this excited me. 'Together in Tune’ was a pivotal event put on by UJS that celebrated unique music & heritage, something that I am very proud to have been a part of.

‘Moving forward, it is fundamental that we are able to raise awareness together for minorities, strengthening our ties and dealing with the challenging futures we face, together. The sushi and Israeli wine definitely deserve a mention too!’

Guitarist Peter Michaels added: ‘We were thrilled to be part of Together in Tune. Jewish and Gypsy musicians have been performing together for hundreds of years and music is part of our shared heritage, but it hardly happens these days, so this was a really special event. Bis-Bas itself is an experiment in bringing together musicians of different cultures, with our Sephardi singer, Ashkenazi guitarist, Jazz trumpeter and Romanian violinist, so we really believe we are better when we are together in tune!’ 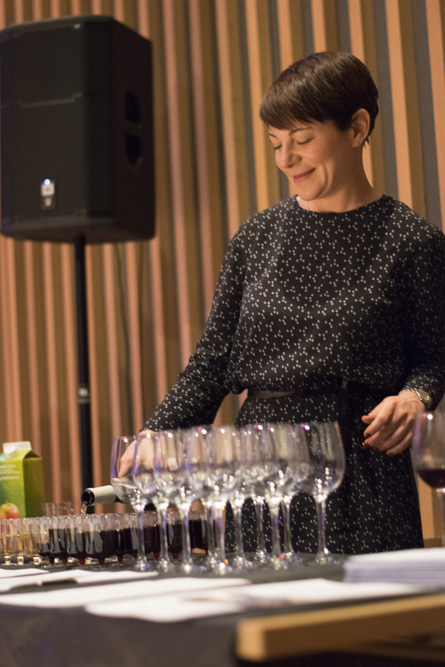 32°-34° Wines generously sponsored the wine at the event, which was produced at MAIA, a winery that employs Israelis with disabilities.

Overall it was an incredible evening and UJS is so grateful to everyone who helped to make it happen. Click here for more information about our interfaith programmes and we hope to see you at the next one!