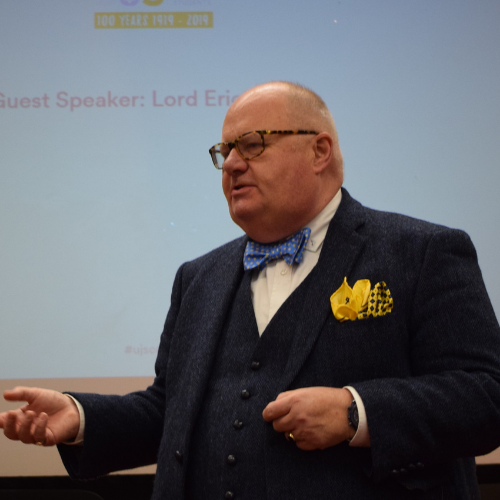 Lord Eric Pickles, Chair of the Conservative Friends of Israel and co-Chair of the UK Holocaust Memorial Foundation Advisory Board, spoke of the need to learn the lessons of history in order to eradicate hatred today.

Coming after a day of discussing and debating policy, the opportunity to hear from distinguished politician and friend of the UK Jewish community illustrated the impact that student and community activism can have.

UJS has been at the forefront of combating racism on campus and in society and many of those working to continue that fight today were UJS activists or allies during their time on campus, including Luciana Berger, Wes Streeting, Tom Watson and John Mann. With UJS success in banning National Action from campus, in advance of them becoming proscribed as a government as an extremist violent group by the UK government, we are leading in combating antisemitism on UK campuses.

Lord Eric Pickles joined us at our conference and ensured Jewish students that he is fully committed to continuing to combat antisemitism and support Israel, calling himself a Zionist. He explained his motivations for taking on his leading positions within fighting Holocaust denial and antisemitism, showing Jewish students that allies like him are important for our work.

Reiterating the sad need for this work and sharing progress towards the delivery of the UK’s Holocaust Memorial and Learning Centre, Lord Pickles observed: “The memorial is a chance for the UK to be part of a process of shaping the narrative of the memory of the Holocaust. When people come out of the Learning Centre, parliament is there. When members of parliament and the house of lords look towards it, they should remember the legislator has the power to protect but also to oppress. We hope the process of building it starts by the end of next year and finished by 2022 so the remaining survivors of the holocaust can actually see it completed.”

We are grateful for Lord Pickles' support and would like to thank him again for attending our conference.