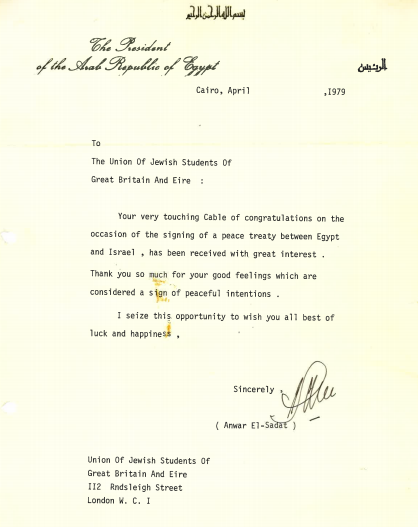 On March 26, 1979, less than six years after waging the Yom Kippur war against Israel, President Anwar El- Sadat of Egypt met with Israeli Prime Minister Menachem Begin to sign a peace treaty brokered by U.S. President Jimmy Carter. It was the first peace agreement Israel had signed with any Arab country and has survived several major geopolitical crises.

The peace treaty has positively affected Israel’s relations with its other Arab neighbours, none of which have engaged in war with Israel since the treaty was signed. Israel’s Oslo Accords with the Palestinians; peace treaty with Jordan; and multiple ties with Gulf Arab nations and North African Arab countries—none of these would have been possible without the precedent of Egypt, the Arab world’s most populous and powerful nation, signing a peace agreement with Israel.

Immediately following the signing of this historic agreement, The Union of Jewish Students composed a cable of congratulations, and in April of 1979 received this letter signed by President Sadat in response.

The President of the Arab Republic of Egypt

To
The Union Of Jewish Students Of
Great Britain And Eire :

Your very touching Cable of congratulations on the
occasion of the signing of a peace treaty between Egypt
and Israel , has been received with great interest .
Thank you so much for your good feelings which are
considered a sign of peaceful intentions .

I seize this opportunity to wish you all best of
Luck and happiness .

The Sinking of the Egoz