"Jerusalem of Gold" (Hebrew: ירושלים של זהב‎, Yerushalayim Shel Zahav) is the most famous of Naomi Shemer’s songs. It was so beloved that it was considered as a possible alternative to the national anthem, Hatikvah.

Naomi Shemer wrote "Jerusalem of Gold" for the Israeli Song Festival (it was not in competition but had been commissioned by the Mayor, Teddy Kollek), held on 15 May 1967, the night after Israel's nineteenth Independence Day. She chose the then-unknown Shuli Nathan to sing the song (who later became famous due to performing this beloved song).

The lyrics weave together biblical references as well as traditional Jewish poetry and themes, dealing with exile and longing for Jerusalem.

At the time the song was written, the Old City of Jerusalem was under Jordanian Occupation. Jews had been banned from the Old City and the rest of Jerusalem east of it, losing their homes and possessions and becoming refugees. All Jews were barred from either returning or entering the areas under Jordanian control, and many holy sites were desecrated and damaged during that period.

On June 5th, only three weeks after the song was published, the Six-Day War began. When, on the third day of the war (June 7, 1967 / 28 Iyar 5727) IDF Paratroopers gained the Temple Mount the song “Jerusalem of Gold” burst from their lips. It was a natural expression of 2000 years of yearning for that moment, an expression of joy that the heart of Zion was finally returned to the Nation of Israel.

They were the physical embodiment of a miracle. Can you imagine that feeling? Although the State of Israel was officially re-established in 1948, it was the moment when Jewish sovereignty was regained in the holiest place on earth for the Nation of Israel that we were a people truly reborn.

After the reunification of Jerusalem, Naomi Shemer felt that her song of yearning was no longer fitting so she created a new ending for the song, turning it into a song of triumph for the Nation that finally returned! 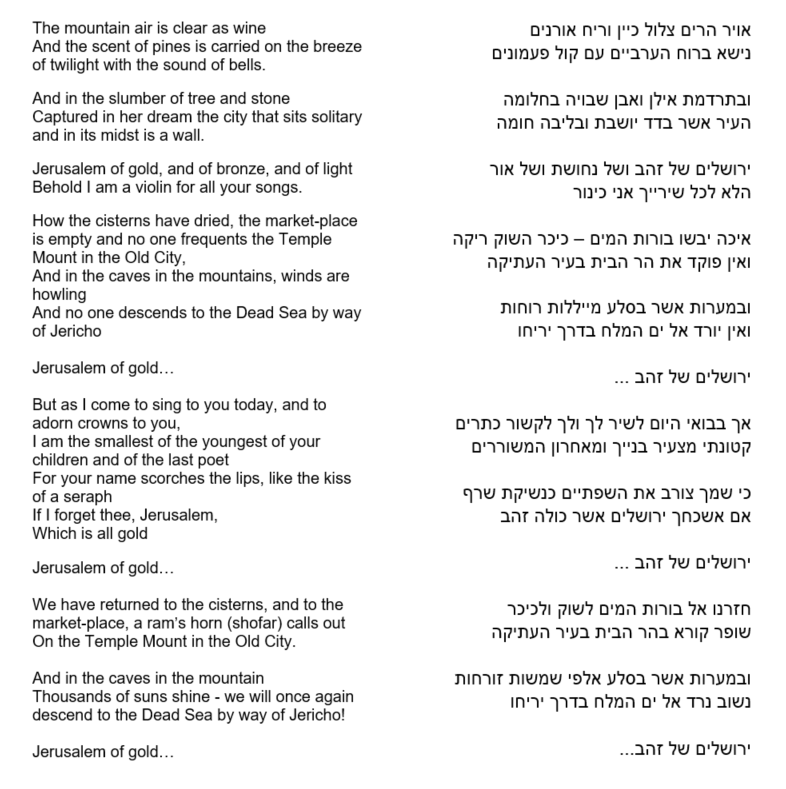 Theodor Herzl: The Birth of Political Zionism - The Challenge of Establishing a Jewish State