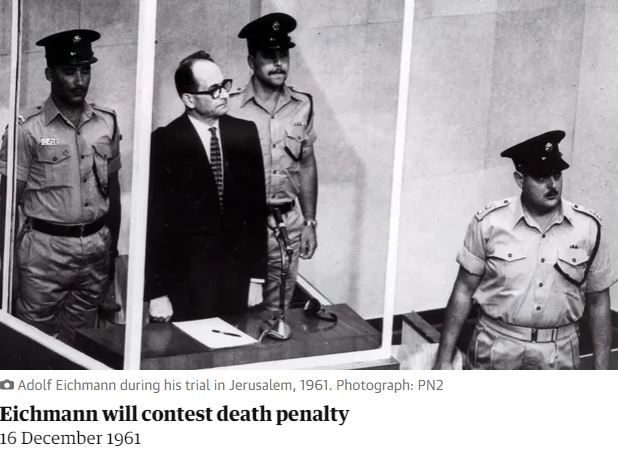 On 15 December 1961, the former Nazi official was sentenced to death by an Israeli court for crimes against humanity, crimes against the Jewish people and war crimes

Jerusalem, 15 December
Adolf Eichmann is to appeal against the death sentence passed on him by three Israel judges here today for the murder of millions of Jews. Reports here say that the appeal is likely to be heard in February by the Israel supreme court sitting as a court of appeal. It would be composed of five justices and would be presided over by Mr Justice Yitzhak Olshan, president of the supreme court.

A hushed court saw the former head of the Gestapo Jewish Affairs Department standing rigidly to attention, chest stuck out and knuckles taut as the sentence was given without ceremony. There was no wearing of a black hood as Eichmann heard “this court sentences you to death”, without moving a muscle.

Judges delayed
Eichmann’s chief defence counsel, Dr Robert Servatius, said afterwards that an appeal would be based on the question of the Jerusalem court’s competence. There were also some points of law which he thought could be contested. Dr Servatius said the verdict of guilty was to be expected and that the trial had been a fair one.

The three judges arrived in court 17 minutes later than expected to write the final page in a story that began in May 1960, when Eichmann was seized by Israeli agents at a bus stop in Buenos Aires.

At the end of a trial which began on 11 April, Eichmann was found guilty of all 15 charges. Twelve of them, under the general headings of crimes against the Jewish people, crimes against humanity, and war crimes, carried the death penalty. He was also found guilty of belonging to criminal organisations, but no penalty on this count.

Eichmann, who had been escorted into the dock at 8 55, was first to jump to his feet as the court orderly announced the judge were entering.

Maximum penalty
Presiding Judge Moshe Landau rejected Eichmann’s plea that he acted under orders, and said the aim of his crimes “was to obliterate an entire people from the face of the world.” Eichmann had carried out the dispatch of every train to Auschwitz and other death camps, each carrying a thousand people. “It is as though he committed a thousand acts of premeditated murder each time,” the judge said. “One who acts for years on end in such conditions must pay the full penalty. Moreover, we found that the accused identified himself in his heart with the purpose of these orders and was activated by a desire to attain their object.”

The court ruled that the death sentence was not mandatory under the Nazi and Nazi Collaborators’ Punishment Law, but a maximum, and that “the sentence to be given is at our discretion.” In sombre tones Mr Justice Landau added “The due punishment of the accused must be the maximum penalty under the law.”

He said, “The court sentences you, Adolf Eichmann to death for crimes against the Jewish people, crimes against humanity, and war crimes for which you were convicted.” The court had decided to impose the maximum sentence “to deter others,” and in view of the gravity of Eichmann’s acts, Eichmann’s crimes were of “unparalleled enormity.”

Bonn, 15 December
The passing of the death sentence on Adolf Eichmann has attracted much less attention in Western Germany than might have been expected.

There are three main reasons for this. The trial of Eichmann has taken such a long time that most Germans have lost interest in it. Other political events have pushed the trial into the background. In any case, Eichmann’s guilt was regarded as already proven, and the death sentence was generally expected.