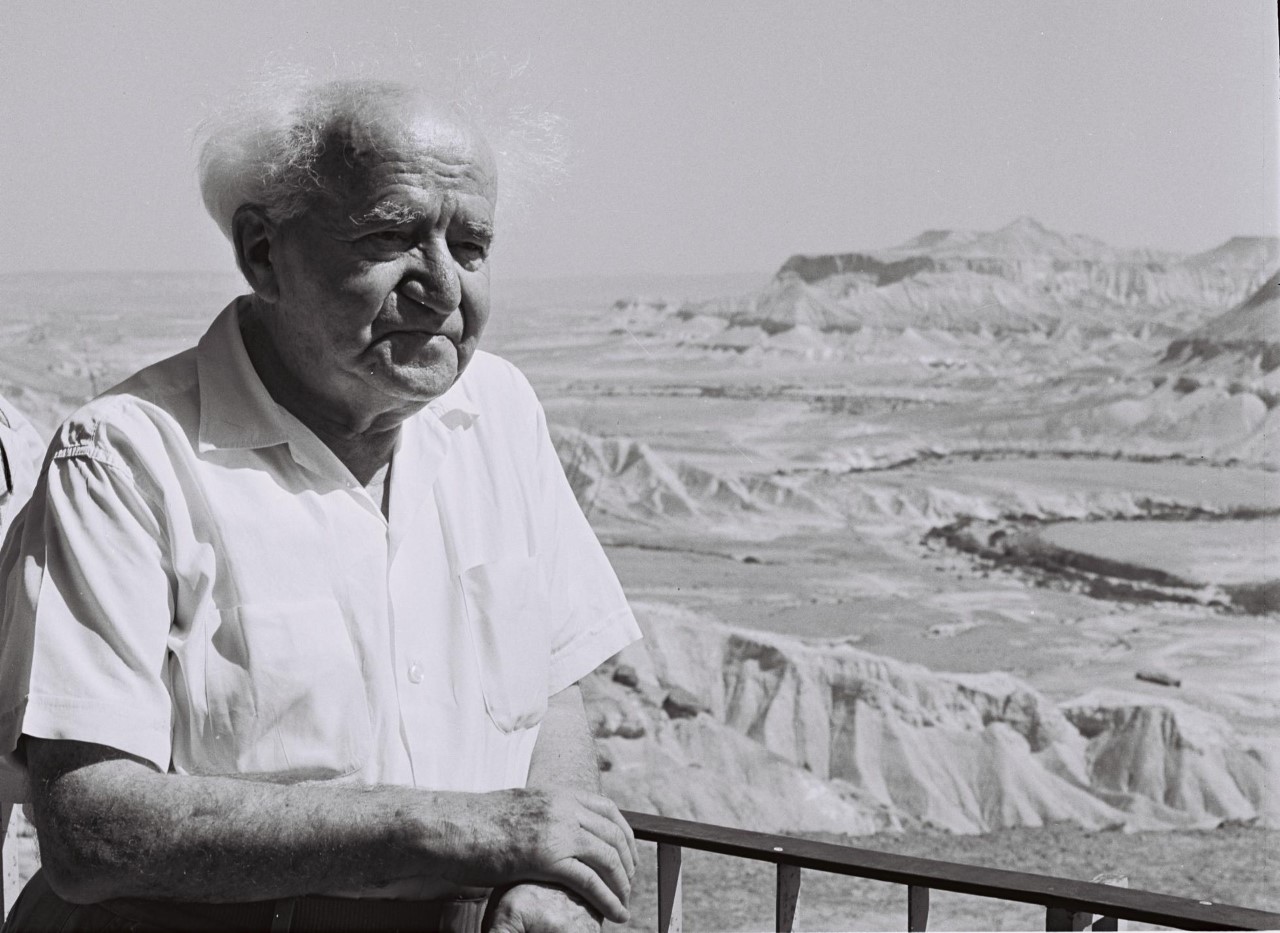 Today (Wednesday, 1st December)  we remember David Ben Gurion on the anniversary of his  Yahrzeit.

"No city in the world, not even Athens or Rome, ever played as great a role in the life of a nation for so long a time, as Jerusalem has done in the life of the Jewish people"

David Ben-Gurion (1886-1973), Israel’s first prime minister, was one of the most important Zionist leaders of the 20th century. His uncompromising vision of Jewish unity and statehood, together with a genius for pragmatic political and military tactics, enabled him to establish the State of Israel and guide it through the social, economic, and military challenges of its early years. But Ben-Gurion’s career was marked by a series of intense conflicts, and he remains one of the most debated figures in Israeli politics. 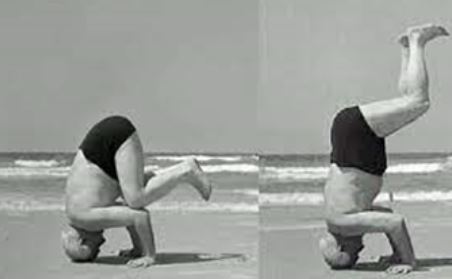 David Ben-Gurion (born Gruen) was born in Plonsk, in Russian Poland, and grew up in a family committed to the Zionist cause. He immigrated to Palestine in 1906 and worked as a laborer and watchman in the Jewish settlements of Rishon Letzion and Petah Tikvah. Almost immediately he took up positions of leadership in the socialist Zionist Poalei Tzion party.

After the war, Ben-Gurion returned to Palestine, where he quickly rose to prominence in the Yishuv (the pre-state Jewish community).  He was instrumental in founding a mass political party–Ahdut ha-Avodah, the forerunner of the modern Labor party–and, in 1920, the Histadrut Labor Federation, perhaps the most important instrument for the realization of Zionist goals. Ben-Gurion believed that socialism and Zionism were two sides of the same ideological coin. Jewish nationalism sought not only to achieve Jewish economic self-sufficiency, but also to create a new kind of Jew: proud, independent, and living off the fruits of manual labor.

At the same time, conflict erupted on a different front. Beginning with the Arab revolt of 1936-39, and continuing with the struggle for the Jewish state in the 1940s, the Jewish community of Palestine was bitterly divided over the use of armed force. The position of Ben-Gurion and the Hagana–the official Jewish self-defense force–was that Arab hostility should be met with restraint–havlaga. This was needed both in order to prevent the escalation of violence and to preserve good relations with the British, whose support was crucial for the fulfillment of Zionist aims. This position changed with the publication of the 1939 White Paper, in which the British government declared its support for the creation of an Arab Palestinian state and effectively froze Jewish immigration.

During World War II, Ben-Gurion declared that the Zionists would fight with Britain against the Nazis as if there was no White Paper, and would fight the White Paper as if there were no war. In 1942, he was instrumental in drafting the Biltmore Program, which called for open Jewish immigration and the creation of a Jewish commonwealth in Palestine. Following the United Nations’ 1947 decision to partition Palestine into Jewish and Arab states, and with the departure of the British in May 1948, he made the momentous decision to declare the establishment of the State of Israel. He became the first prime minister of the State of Israel and guided the country during the War of Independence.

The old will die and the young will forget." 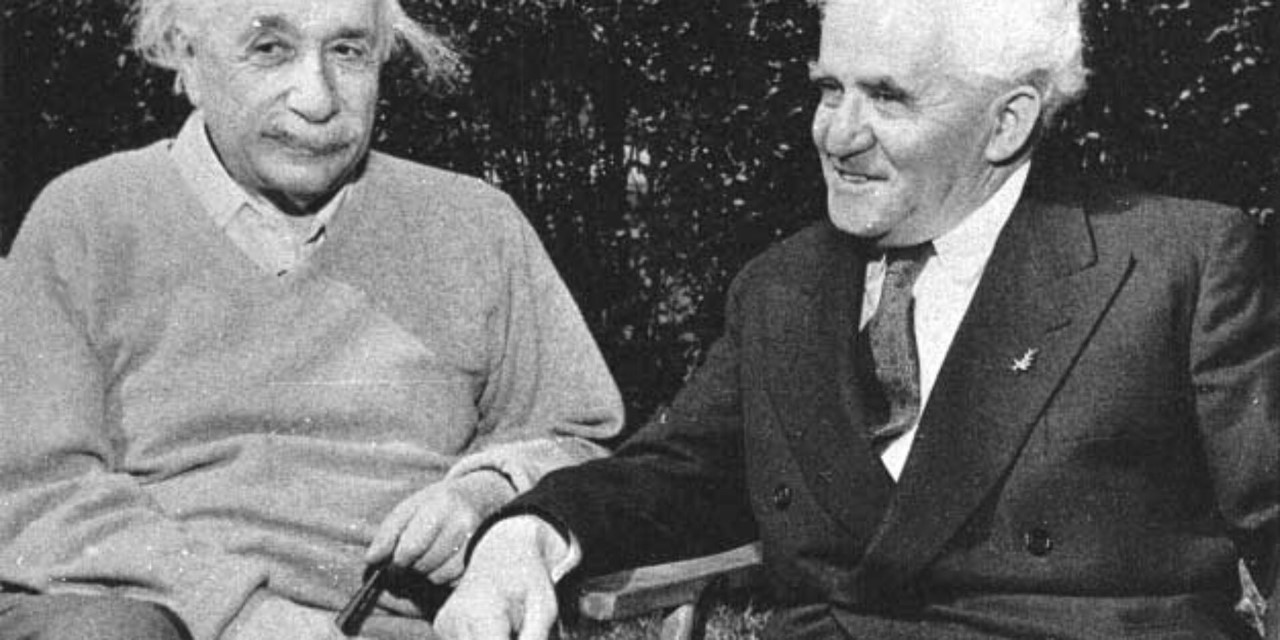 Ben-Gurion’s tenure as prime minister (1948-53 and again from 1955-63) was governed by the principle of mamlachtiut, or statism–the belief that sectarian ideologies and interests must be replaced by loyalty to the state as a whole. Ben-Gurion set aliyah and immigrant absorption as Israel’s top priorities, established the Israel Defense Force, dispersing militias such as the Palmach and the Etzel, and sought to abolish ideological distinctions in education, replacing party-run schools with one all-encompassing state education system.

More controversially, Ben-Gurion presided over the shilumim or reparations agreement, in which West Germany agreed to pay $715 million to the State of Israel in compensation for taking in refugees from the Holocaust. The deal provoked savage public debate: the government was accused of taking blood money from the Germans. Yet without the financial settlement, Israel’s economic development and very survival would have been in question.

On resigning from the premiership in 1953, Ben-Gurion retired to Kibbutz Sde Boker. In 1970, after a period in parliamentary opposition in the Knesset, his retirement became permanent.

Operation Solomon: Thirty years since the rescue of the Jews of Ethiopia