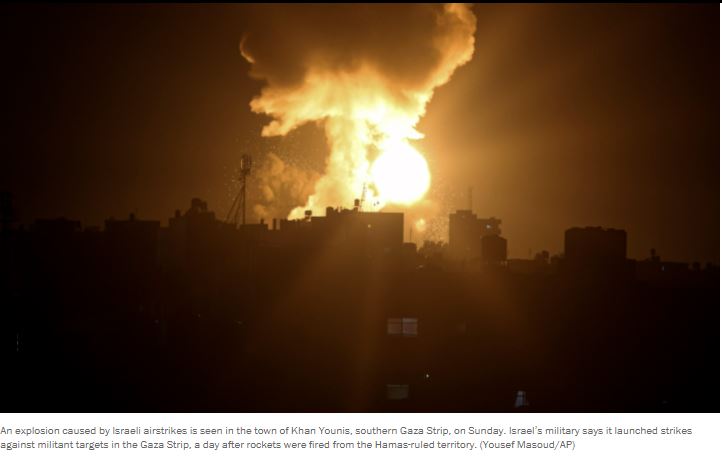 JERUSALEM — The Israeli military struck at least two sites inside the Gaza Strip late Saturday, a limited attack that reportedly caused no injuries but raised concerns that a period of relative quiet following last May’s deadly war between Israel and the Hamas militant group is growing shaky.

The Israel Defense Forces said that the strikes were in response to two rockets fired from Gaza earlier in the day and that Israeli helicopters, fighter jets and tanks had targeted a rocket manufacturing facility and other military sites. The attack was focused on the area of Khan Younis in the southern part of the enclave, according to sources in Gaza.

Forces inside the coastal enclave fired a pair of antiaircraft missiles during the attack, according to reports in Hamas-affiliated media. The IDF reported no injuries or damage to its aircraft.

The exchange follows several days of tensions that started when snipers in Gaza fired on Israeli contractors doing maintenance on the 40-mile border fence surrounding the enclave. One civilian worker was treated for minor injuries from that attack. Israeli tanks fired on Hamas positions in response, causing minor injuries to three people, according to the Palestinian Ministry of Health.

Hamas did not claim responsibility for the shooting, and according to reports in local media, communicated to Egyptian go-betweens that a rogue attacker had pulled the trigger and that Hamas was not seeking to escalate the standoff.

Early on New Year’s Day, two rockets were fired from Gaza, traveling over the Mediterranean Sea where they did no damage and caused no air-raid warnings in Israeli communities, although one of the projectiles fell not far from the Tel Aviv coastline. No group claimed responsibility for the launch. One Hamas official said the firings were the result of an electronics malfunction caused by a winter storm, according to Palestinian media. Military analysts said Palestinian Islamic Jihad groups not controlled by Hamas may have launched the rockets.

The IDF pinned the blame on Hamas.

“Hamas is responsible and bears the consequences for all activity in and emanating from the Gaza Strip,” the military said in statement after the late-night strikes.

In a year of conflict and covid, Gaza life continues amid the rubble

The rise in tensions comes as Israel and Hamas are in negotiations, brokered by Egypt, over a lasting peace agreement. But the talks have bogged down over issues that include the return of prisoners and human remains reportedly held by Hamas.

As a result, more than seven months after the end of fighting that destroyed buildings and killed more than 260 people in Gaza, internationally funded reconstruction plans have yet to be launched in earnest. At least 16 people in Israel died as Hamas fired thousands of rockets into the country.

Military analysts said the sniper attack and the rocket launch may be attempts by Hamas or other Gaza militants to pressure Israel into picking up the pace of rebuilding and easing other constraints on the enclave.

Militants in Gaza also warned they would step up attacks amid reports that a Palestinian prisoner held by Israel was in danger of dying after a prolonged hunger strike. Hisham Abu Hawash was detained more than a year ago on suspicion of being an Islamic Jihad activist, according to Israeli media, but he has not been formally charged or tried. He has refused nourishment for almost 20 weeks.

At stake, analysts say, is an unusually long period of relative calm along the Gaza border, where the exchange of rockets and reprisal strikes are a routine part of life for both Gazans and Israelis in surrounding towns.

Since a cease-fire ended the war in May, however, almost no attacks have been launched by either side. Military and political leaders have boasted in recent weeks that they have achieved a level of deterrence in Gaza, a claim called into question by the recent exchanges.

“It appears that Israel neglected to inform Gazans of the changes in its talking points,” Haaretz military analyst Amos Heral wrote Saturday.

Hazem Balousha in Gaza City contributed to this report.