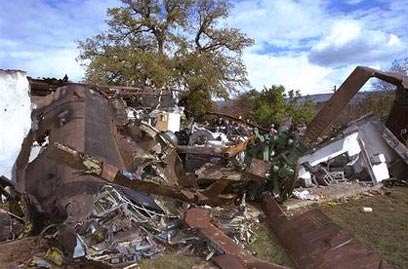 On February 4, 1997, Two Sikorsky CH-53 C stallion helicopters, "Yasur", of the Israeli Air Force collided over the Hula Valley, leading fighters from the Nahal Brigade and the Golani Brigade to operational activities at IDF outposts in southern Lebanon. The fighters who were in the helicopters belonged mainly to the patrol battalion of the Nahal Brigade - two teams of the Corps of Engineers (Falhan) and a team of the unit against tanks, soldiers from the Golani Regiment, the Armored Corps, and more.

One of the helicopters crashed in the yard of a building that served as a B&B for vacationers in Moshav Shear Yashuv, and the other crashed nearby, on the creek between Shear Yashuv and Kibbutz Dafna. All 73 soldiers in helicopters were killed in the incident. 8 of them were crew members who flew the helicopters. There were no casualties on the ground.

The helicopter disaster was the deadliest aviation disaster involving helicopters, until 2002 when a Russian military helicopter was shot down over Chechnya. 127 people perished in this incident.

The disaster increased public support for a call for the withdrawal of IDF forces from the security zone in southern Lebanon, which finally took place in May 2000.

One of the fallen soldiers in the helicopter disaster was Erez Shtark. A poem was found in his belongings after his death and read out at his funeral.

Later on, the poem turned into a rock song by the band Knisiyat HaSechel.

The song is often played on Yom Hazikaron in Israel as it expresses the sacrifice and feeling of guilt young soldiers and their families experience in Israel.

When will the ‘Happy dhimmi’ myth be discredited?