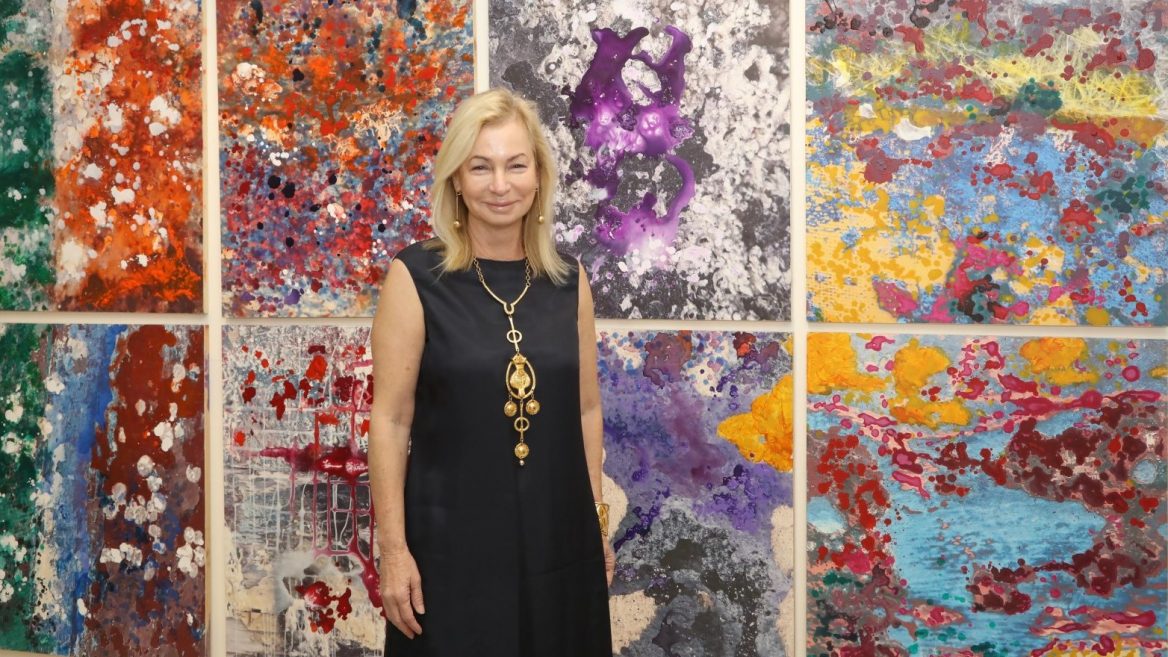 But there are many other contemporary visual artists from Israel making their mark internationally. Here are just a few, new and veteran, to watch on the world canvas.

Born in Casablanca in 1958, Jojo became a farmer in Israel while pursuing art as a hobby. Eventually he began incorporating farming equipment and techniques into his artwork, leading to unusual artistic methods including water pressure to manipulate metal into artwork and furniture.

In his paintings, Jojo uses bottles with a tiny hole cut from the end to distribute the colors in uniform patterns across large canvases, creating signature pieces that portray women, flowers and other forms of nature.

Jojo opened his first gallery 10 years ago in Tel Aviv, followed by a New York City gallery and a website that sells his works with free worldwide shipping. He also has a studio and showroom at the Dead Sea.

In September 2006, kibbutz-based conceptual artist-sculptor Ken Goldman’s soft, colorful Kabbala dolls were an instant hit at the annual toy audition at FAO Schwarz in New York City. Since then, Goldman’s clever, provocative and eclectic works of Judaica have been exhibited, installed and sold widely.

“Goldman’s work is an exuberant, idiosyncratic celebration of Jewish practice,” wrote Ben Schachter in his 2017 book, Image, Action, and Idea in Contemporary Jewish Art, which devotes a chapter to Goldman and features “With Without” on its cover, an image of Goldman himself “wearing” a kippah of his own hair.

A graduate of New York’s Pratt Institute, Goldman works in multiple media including performance art. His creations have been exhibited at museums such as the Israel Museum, Museum of Islamic Art, Ein Harod Museum, Philadelphia Museum of Jewish Art and the Vienna Jewish Museum.

In the fall of 2018, Goldman was one of five international artists – the others were Andi Arnovitz (see below), Lynne Avadenka, Meydad Eliyahu and Leora Wise — chosen for a three-week Venice art residency on climate change through a Jewish lens. Goldman now is finishing a three-stage sculpture installation in an old Jewish cemetery in Kaluszyn, Poland.

This kibbutz-raised visual artist with a degree from Bezalel Academy of Art and Design in Jerusalem uses video, sculpture and other media to depict the female form as a medium to explore identity, sexuality, and the relationship between men and women.

Ben Ari’s work has been displayed in Barcelona, Beijing, Berlin, Bonn, Brussels, Bucharest, Bulgaria, Los Angeles, Milan, New York, Paris, Rome, Tokyo, Vancouver and other global cities and at many Israeli museums and galleries. She has received awards at arts festivals in Madrid and Tokyo.

Through the Visiting Israeli Artists Program, Ben Ari is teaching at the University of Florida Gainesville during the 2019 spring semester. A special exhibition of her work debuted at the university’s Gary R. Libby Gallery in the Fine Arts on March 25.

Israel’s most successful street-art crew – four men who don’t reveal their real names — got started in Haifa and branched out across the globe with commissions ranging from pop-art murals to 3D installations to album covers and U2 music videos.

“UnWearable Art” by Andi Arnovitz (2018) made of Japanese paper, etching, aquatint and threads. It’s a tapestry of all the prints she made in the last five years. Photo: courtesy

Her work has been exhibited across the world (including France, Spain, England, Poland, Canada, China, Finland, Germany, Lithuania and the United States) and is in public and private collections including the US Library of Congress, The Smithsonian, the Magnes Collection of Jewish Art and Life in California, and Yale University in Connecticut.

“Exile” by Andi Arnovitz (2015) made of silk, porcelain and linen threads. Photo: courtesy

“My goal is to seduce the viewer visually, to lure them into a closer examination of the work and then to confront them with a problem or issue, and cause them to re-examine their views, engage with a specific subject and increase their awareness of a problem,” Arnovitz tells ISRAEL21c.

This spring, her works are showing in the Sichuan Museum of Fine Art in China, the Jewish Museum of Berlin, Susquehanna Art Museum in Pennsylvania, and Yale. In the summer and fall of 2019, Arnovitz will exhibit at the HUC Museum in Manhattan and Stadhaus Museum in Germany as well as Israeli locations.

Tel Aviv-based Fatma Shanan Dery’s large-scale oil paintings suggest fluid definitions of gender, national and ethnic identities through scenes of people (including herself) from circles of her life — especially from Julis, the Israeli Druze village where she was born and raised. Traditional Druze rugs placed in unexpected locations figure prominently in her work.

Fatma Shanan Dery’s oil-on-canvas paintings depict rugs on roofs, in fields, and on the road, eliminating spiritual or religious value and representing tradition in a new context. Photo: courtesy

Winner of a 2016 prize for figurative-realist art given by the Tel Aviv Museum, Shanan Dery has done artist residencies in New York, California and at the Artport program in Tel Aviv. Her works are included in the collections of the Israel Museum and Ilana Goor Museum in Israel and in private collections in Israel and abroad.

Ariela Wertheimer, an Israeli philanthropist listed in Forbes’ 2018 “The World’s Richest People,” has been painting professionally since 1997.

In 2017 and 2018, Wertheimer displayed at the annual Art Biennale in Venice with Tel Aviv’s Farkash Gallery, and in November 2018 opened her own studio in Jaffa.

Wertheimer made her US debut in 2018 at Scope Miami Beach and her Asian debut at Singapore Art Week in January 2019. She will be featured at the 2019 Artexpo in New York City, April 4-7, and then Art Biennale in Venice this May.

Ariela Wertheimer’s “Ropes and Ties” was shown at Scope Miami in 2018. Photo: courtesy

At Scope, she exhibited the Jaffa Port-inspired “Ropes and Ties: The Freedom to Let Go,” which symbolizes the physical and conscious/emotional ropes that are intertwined in the world.

“The strings made from plant fibers which have created a twine into a rope … have accompanied humankind from the beginning. The ropes allow, the ropes restrict, the ropes connect with other ropes and a continuity is created,” she explains.

Award-winning illustrator and designer Pierre Kleinhouse has a Tel Aviv studio, where he does artworks for exhibitions and commercial clients. He also gives talks and illustration workshops around the world.

Pierre Kleinhouse’s “Bear & Welder” was done for the Museum of Communism in Czech Republic. Photo: courtesy

His posters and tees are sold online.

Gerstein’s pop-art paintings and sculptures speak in a universal language of playfulness, humor and optimism. True to his “art for everyone” motto, his works range in price from $100 to $1.5 million, and are sold in his Tel Aviv gallery, in design shops and online.

In January 2016, Gerstein presented Pope Francis with a wall sculpture depicting in bright colors the phrase from Psalms, “The Lord is my shepherd, I shall not want,” in Hebrew and Spanish.

This year, Gerstein did a special exhibition in Sydney, Australia for the benefit of Make A Wish Israel, and inaugurated a new sculpture at the entrance of a new museum of contemporary art in Taiwan. In April he’ll have a solo show in Vienna.

Buenos Aires native Sylvia Feinstein makes tapestries at her gallery in Modi’in based on biblical themes, using an ancient technique to convey the drama of the scene and its characters in a contemporary abstract artwork.

Her series of tapestries on Leviticus, on doves and on women in the Bible, among others, have been displayed in private and public spaces worldwide including Montevideo, Buenos Aires, Houston, Toronto and Antwerp; and many places in Jerusalem including the Bible Lands Museum, Yad Vashem and the Jerusalem International Convention Center.

Feinstein is part of the “Save the Reef” international fiber art project that will tour internationally for five years starting in September 2019 to raise global awareness of dangers facing coral-reef ecosystems.

The works she is creating for this project will hang at the Center for the Arts in Jackson Hole, Wyoming, the gateway to the Grand Teton National Park, and at the Jackson Lake Lodge at the entrance to Yellowstone National Park, for a month leading up to the Jackson Hole WILD Film Festival and Conservation Summit in September.

Innovation in Israel: Between Politics, Society, and Culture