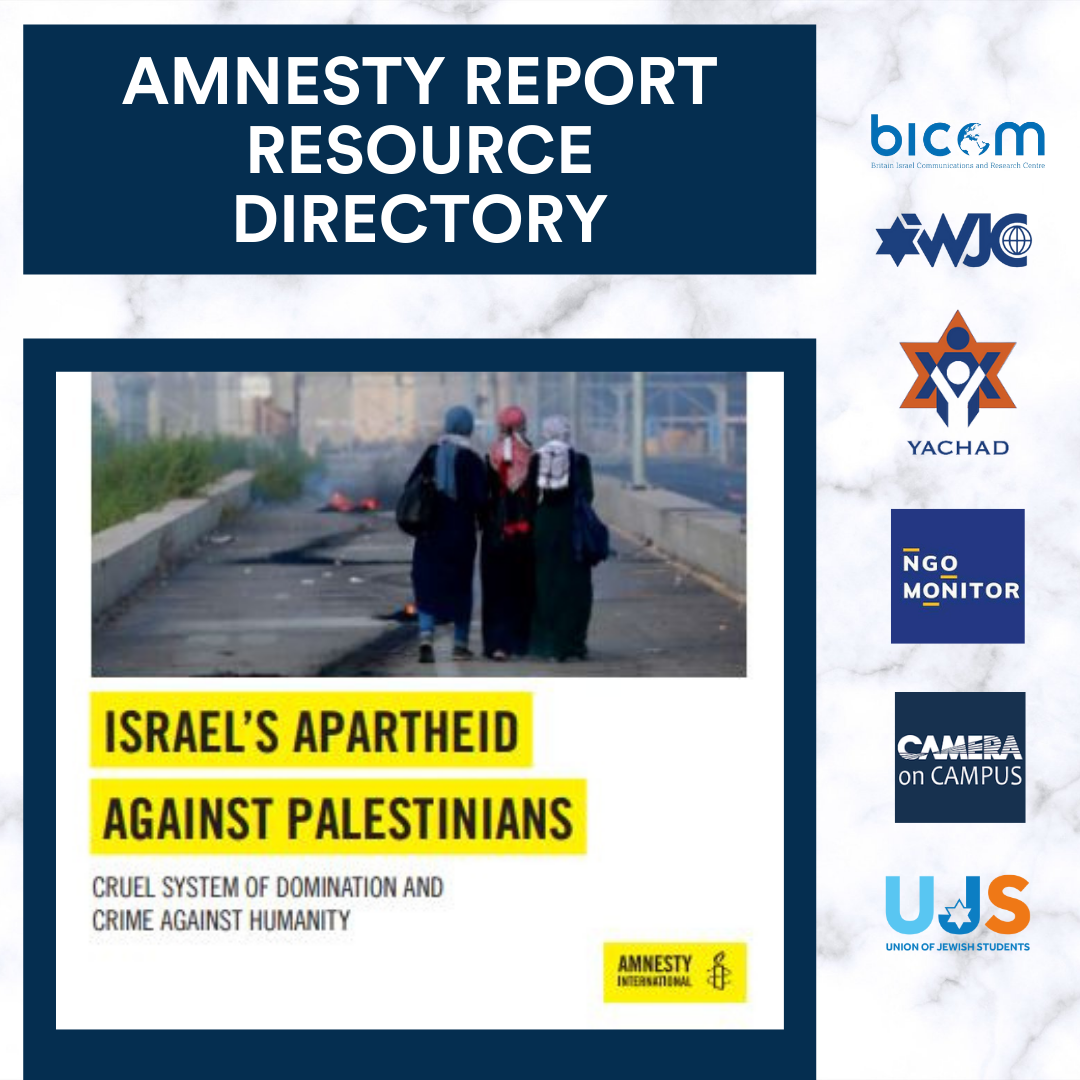 On February 1st, Amnesty International released a report claiming to have analysed "Israel’s intent to create and maintain a system of oppression and domination over Palestinians and examined its key components: territorial fragmentation; segregation and control; dispossession of land and property; and denial of economic and social rights. It has concluded that this system amounts to apartheid."

Various organisations within and without the Jewish community have generated resources, statements and perspectives on this matter.

Hosted on this page is a collection of documents and resources to help make sense of the report and its use.

ISRAEL’S APARTHEID AGAINST PALESTINIANS:  CRUEL SYSTEM OF DOMINATION AND CRIME AGAINST HUMANITY

On the 31st of January the Board of Deputies of British Jews and the Jewish Leadership Council released a joint statement regarding the Amnesty International report.

Yachad, an organisation which works to mobilise British Jews in support of a political resolution to the
Israeli-Palestinian conflict, put out a statement expressing that the report must be taken seriously by the community, rather than focussing 'solely on the rights and wrongs of the use of the word apartheid’.

Statement from The Zionist Federation

The Zionist Federation for Great Britain and Northern Ireland 'condemns Amnesty International’s report focusing on Israel which was published earlier today. We have found it to be biased, hostile, and consistently applying unfair standards to Israel no other country is subjected to.'

Statement from the World Jewish Congress

“We reject the view that Israel’s actions constitute apartheid,” State Department spokesman Ned Price said Tuesday. “We don't offer our own public comprehensive evaluations of reports, but we certainly reject the label that has been attached to this when speaking about Israel.”

BICOM analysis of the Amnesty report

The Britain Israel Communications and Research Centre is a think tank which promotes awareness of Israel and Middle-East Politics in the UK. BICOM released this analysis which argues that the Amnesty report is biased and ignores positive developments that can be built on to further the cause of peace.

An article by David Collier, a freelance Investigative Journalist. For almost a decade, David has been writing about antisemitism and anti-Israel bias.

The Anti Defamation Leage is an NGO dedicating to countering the defamation of the Jewish people.

NGO Monitor is an an NGO based in Jerusalem, which analyzes and reports on the output of the international NGO community.

BREAKING: Looks like @amnesty was forced to walk back some of the antisemitism in its report. But we still know what they really think.... pic.twitter.com/UDxWlPs6Wo

The Latest Target of BDS: A Palestinian Rapper

Advice to a Jewish Freshman: From Howard Jacobson