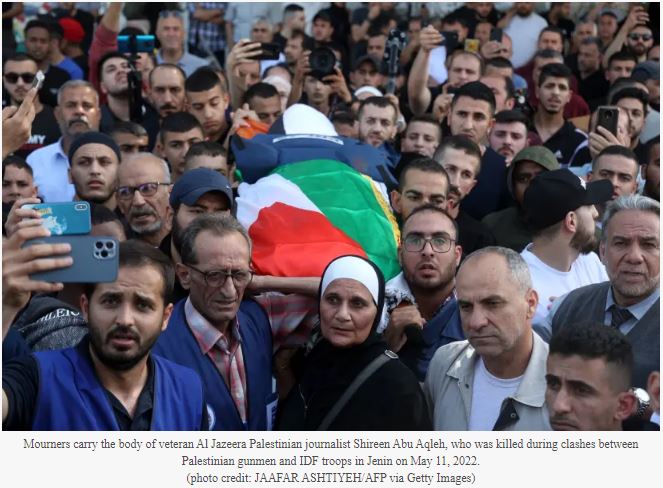 It is not clear which side fired the bullet that killed Al Jazeera correspondent Shireen Abu Akleh, who was also a US citizen.

Al Jazeera correspondent Shireen Abu Akleh was killed Wednesday morning and another journalist was wounded during clashes between armed Palestinians and IDF troops in Jenin.

The Palestinian Health Ministry said that Abu Akleh was struck by a bullet to the head while another journalist, Ali Samoudi, who works for the Jerusalem-based Quds newspaper, was in stable condition after being struck in the back.

Ali Smoudi, a veteran journalist from Jenin who was with Abu Akleh, said that they arrived at the scene to report on the IDF operation.

"All of a sudden, they opened fire at us," he told reporters from his hospital bed. Smoudi, who was injured during the incident, claimed that no one warned him and his colleague before the shooting.

"They killed her in cold blood," he said. "One bullet hit me, the second hit Shireen."

Smoudi dismissed claims by the IDF that there were gunmen in the area during the incident. "There were no resistance fighters," he said. "We were alone in the area."

The clashes began after IDF, Shin Bet (Israel Security Agency) and Border Police forces carried out arrest operations, including in the Jenin refugee camp, near the town of Burkin, and in a number of other locations across the West Bank.

“During the operation in Jenin refugee camp, suspects fired an enormous amount of gunfire at troops and hurled improvised explosive devices. Forces fired back with live fire” the Israeli army said in a statement.

In footage from the scene, 51-year-old Abu Akleh, who is also an American citizen, was seen wearing a Press vest and a helmet but she was hit below the ear in an area not covered by her helmet.

Abu Akleh will be buried in Ramallah on Thursday. PA President Abbas is expected to attend the funeral.

"I don't think we killed her. We offered the Palestinians to open a swift joint probe. If we indeed killed her, we'll take responsibility, but it doesn't seem to be the case,” he said, adding that while the Palestinians “might have a good reason” not to cooperate on a joint investigation, “if they do, we’ll have better answers.”

Kohav told The Jerusalem Post that the Palestinians refused to investigate the incident with Israel.

Expressing his “sorrow” over her death, Defense Minister Benny Gantz said that the preservation of life is “considered of paramount importance” for Israel, as well as freedom of the press.

IDF troops would never intentionally harm members of the press, and any attempt to imply otherwise is baseless," he said, adding that "the accusations by certain Knesset members and other individuals, against Israel’s communications institutions, and in particular the IDF Spokesperson’s Unit, are false.

"I would like to express my support to our defense forces and to all the units that work solely to maintain our security and to reflect the truth," he said.

"Preliminary findings from the investigation conducted by the IDF in the last several hours indicate that no gunfire was directed at the journalist – however, the investigation is ongoing. On the other hand, we have seen footage of indiscriminate shooting by Palestinian terrorists, which is likely to have hit the journalist. We will communicate our findings in a clear and transparent manner to our American friends, as well as to the Palestinian Authority," he added.

Urging the Palestinians to conduct a joint investigation with Israel, he said that he sent a message to Abbas that “Our responsibility as leaders is to maintain security, to conduct ourselves in a way that will prevent further violence and bloodshed and to uncover the truth."

Gantz also said that he sent messages to other countries, including Qatar where al-Jazeera is based because "the findings at this time indicate that there is a reasonable chance that the journalist was shot by Palestinian armed terrorists."

Bennett said that according to the information that Israel currently has, “there is a good chance that armed Palestinians, who fired widely, are the ones who led to the unfortunate death of the journalist. Palestinians were even documented saying ‘we hit a soldier, he is lying on the ground.' No soldier was injured, which raises the possibility that they shot and hit a journalist.

“We back our fighters," the prime minister said. "IDF forces will continue to act against the terrorists in order to break the deadly wave of terrorism and restore security to the citizens of Israel.”

Foreign Minister Yair Lapid said Israel offered the Palestinians a "joint pathological investigation into the sad death" of Abu Akleh, adding that "journalists must be protected in conflict zones and we all have a responsibility to get to the truth.”

Al Jazeera blamed Israel for her death, saying that she was “deliberately” targeted by troops.

“We condemn this heinous crime, intended to prevent the media from carrying out its message, and we hold the Israeli government and the occupation forces responsible for her death,” the channel wrote on Twitter, adding “We call on the international community to condemn and hold the Israeli occupation forces accountable for the deliberate killing of our colleague Shireen Abu Akleh.”

Abu Akleh was born in east Jerusalem and worked for several agencies such as UNRWA, Radio Voice of Palestine, Amman Satellite Channel, the Moftah Foundation and Radio Monte Carlo, eventually switching to Al Jazeera in 1997. She was widely known and respected in the Arab world.

"Our deepest condolences to the family of Palestinian journalist Shireen Abu Akleh, who was martyred today by the bullets of the Israeli occupation," Hussein Al Sheik, member of the Palestinian Liberation Organization (PLO) Executive Committee wrote on Twitter.

"The crime of silencing the word is committed yet again, and the truth is murdered by the bullets of the occupation. A sad day in Palestine," he wrote. "We belong to God and to Him we shall return."

Tor Wennesland, United Nations Special Coordinator for the Middle East Peace Process wrote on Twitter that he strongly condemned her death and called for “an immediate and thorough investigation and for those responsible to be held accountable. Media workers should never be targeted.”

The human rights group Yesh Din called for an international investigation into her death, saying that the Israeli defense establishment “has proven in several cases that it is unable to investigate such incidents on its own.”

Abu Akleh’s death “requires urgent international intervention in order to get to the truth; we call for the establishment of an independent international commission of inquiry to investigate this case in depth.”

The IDF has been operating in Jenin and across the West Bank in an attempt to stop the ongoing attacks in Israel that have killed 19 in the last month and a half.

Close to 30 Palestinians have been killed by Israeli security forces over the same period of time, either while committing attacks or during clashes. Several bystanders have also been killed, including a teenage girl who was returning home from studying.

In April, 18-year-old Hanan Khadour from the town of Faqqua near Jenin died from wounds she sustained during an IDF raid on Jenin to arrest Palestinians suspected of being involved in the attack in Tel Aviv terror that killed three men.

Khadour was shot in the stomach during clashes between armed Palestinians and Israeli security forces while in a taxi on her way home from a private lesson that she was taking in order to prepare for her high school final exams.

The Palestinian Health Ministry claimed that she was killed by Israeli fire; the IDF Spokesperson’s Unit said that they were investigating the claims.

Tovah Lazaroff and Khaled Abu Toameh contributed to this report.

Israel is building a wall of lasers to defend against rockets. Will it work?