Amid global anger, Israel says it will investigate police assault on funeral 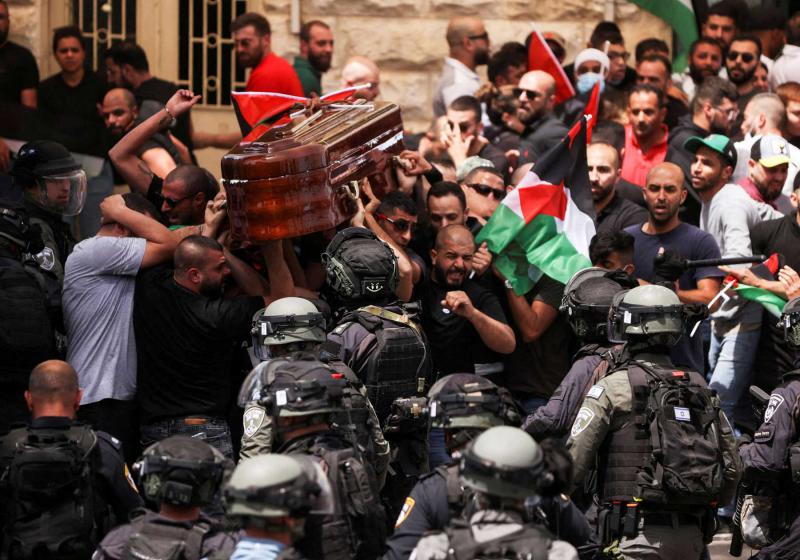 TEL AVIV — Jerusalem police say they have opened an investigation into their handling of a high-profile funeral of a Palestinian American journalist, after images of its officers using batons to beat mourners sparked global condemnation.

The journalist, Shireen Abu Akleh, a veteran correspondent for Al Jazeera, was fatally shot Wednesday while covering an Israeli military raid in the West Bank. Witnesses, the network and Palestinian authorities said she was shot by an Israeli soldier. Israel has said that she was caught in Israeli-Palestinian crossfire and that it has not determined who killed her.

The funeral in Jerusalem on Friday, for a journalist who was highly regarded for decades across the Arab world, drew thousands of people. The procession, under Palestinian flags and amid shouted slogans, was among the largest gatherings in Jerusalem in recent memory, and was an unusually open display of Palestinian national sentiment, participants said.

At the start of the funeral, Israeli riot police stormed a group of mourners as they attempted to carry the coffin from a hospital in East Jerusalem to a church in the Old City. The police fired stun grenades and used batons to beat mourners and people carrying the coffin, which at one point almost fell to the ground.

Officers also “zealously” rounded up Palestinian flags, despite directives not to do so from the Ministry of Internal Security, said Esawe Frej, Israel’s minister of regional cooperation and a Palestinian-Israeli member of the left-wing Meretz party. In a tweet Friday, he said that the Israeli police “disgraced the memory and funeral” of Abu Akleh.

Israeli police initially said that their actions were carried out in response to threats to public order. They said they had coordinated with the family to transport the coffin via hearse and claimed that the procession was overtaken by a mob of rioters who insisted on carrying it by foot.

“We will not allow the funeral to serve as a cover and sponsor for violent disturbances,” the Israeli police told reporters on Friday. The police shared video that they said showed funeral participants “throwing objects.”

Washington Post reporters who attended the funeral saw no evidence that mourners were threatening police or hurling objects at them, apart from one or two plastic water bottles just before police charged the gathering, followed by a barrage of bottles during the melee as the police set upon the mourners.

Abu Akleh’s brother, Antoun Abu Akleh, told the AFP news agency that “there was no agreement” between his family and the police about funeral arrangements. “We gave them the number of participants and the path of the funeral and this is what happened,” the agency quoted him as saying.

On Saturday, the police said they were “looking into the events” at the funeral but continued to insist that officers had come under attack.

The footage of the beatings was met with outrage by Palestinians, condemnation by some foreign governments and sharp criticism from some within Israel, where politicians, rights advocates and some police officers decried what they said was an irresponsible reaction to an overwhelmingly nonviolent event being watched by a global audience.

“Even if Palestinian flags were waved, some anti-Israel slogans were shouted and some stones were thrown,” police should have exhibited more cautious judgment, an unidentified person from the Israeli police told Israel’s Channel 12 News on Saturday.

Footage from the funeral showed “a shocking display of unbridled brutality and violence,” Oded Shalom wrote in the Israeli newspaper Yediot Ahronot.

White House press secretary Jen Psaki called the images from the funeral “deeply disturbing.” The European Union’s delegation for relations with the Palestinians said it was “appalled.” Rep. Rashida Tlaib (D-Mich.), a Palestinian American member of Congress, said it amounted to “violent racism, enabled by $3.8B in unconditional military U.S. funds,” in a message posted on Twitter.

President Biden, asked about the handling of the funeral, said, “I don’t know all the details, but I know it has to be investigated.”

On Saturday, Police Commissioner Kobi Shabtai and Public Security Minister Omer Bar Lev ordered an investigation into potential misconduct, saying the results would be presented to officials in the coming days.

On Sunday, Israeli security forces were on the highest possible alert and had bolstered troops ahead of Palestinian “Nakba Day,” which commemorates the displacement of hundreds of thousands of Palestinians who fled or were driven from their land as a result of the establishment of Israel in 1948.

Hamas has called on Palestinians to ascend the contested holy site known to Muslims as the Noble Sanctuary and to Jews as the Temple Mount — where last May violent clashes between Palestinian demonstrators and Israeli forces preceded the outbreak of an 11-day war in Gaza.

The Israeli military has shifted in its response to Abu Akleh’s killing, first saying that it was likely that she was hit by a bullet fired by Palestinian gunmen, and later that it was investigating the possibility that an Israeli soldier fired the fatal shot.

The military said it was looking into two possible scenarios: that she was hit by a Palestinian gunman shooting at Israeli military vehicles, or by an Israeli soldier who fired from the slit of an armored vehicle in response to Palestinian fire. A news release Friday detailing the findings said that Israeli military vehicles were stationed around 200 meters from Abu Akleh’s location.

The Palestinian public prosecutor’s office, in a statement revealing its preliminary findings, contradicted Israeli claims that Abu Akleh was caught between Israeli and Palestinian fire. It said that Israeli troops were the only ones firing at the time Abu Akleh was killed, with the nearest Israeli troops about 150 meters away. It added that Israeli soldiers continued to fire at the spot where she had been standing, which “hindered attempts by colleagues and citizens to deliver first aid.”

The Palestinian Authority has refused Israeli requests for a joint investigation, saying it will conduct its own inquiry, and declined to hand over the bullet that killed Abu Akleh to Israeli authorities.

Abu Akleh’s killing comes amid a weeks-long uptick in violence that has seen Palestinian assailants, many from the area around Jenin, carry out deadly attacks in Israel, killing at least 19 people. The Israeli military has stepped up raids in the West Bank, killing at least 30 Palestinians, according to local reports.

Steve Hendrix in Jerusalem contributed to this report.