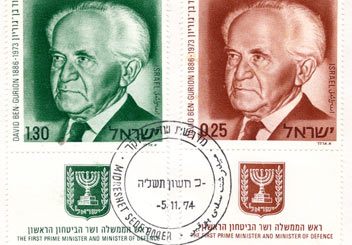 The first prime minister of the Jewish state.

David Ben-Gurion (1886-1973), Israel’s first prime minister, was one of the most important Zionist leaders of the 20th century. His uncompromising vision of Jewish unity and statehood, together with a genius for pragmatic political and military tactics, enabled him to establish the State of Israel and guide it through the social, economic, and military challenges of its early years. But Ben-Gurion’s career was marked by a series of intense conflicts, and he remains one of the most debated figures in Israeli politics.

David Ben-Gurion (born Gruen) was born in Plonsk, in Russian Poland, and grew up in a family committed to the Zionist cause. He immigrated to Palestine in 1906 and worked as a laborer and watchman in the Jewish settlements of Rishon Letzion and Petah Tikvah. Almost immediately he took up positions of leadership in the socialist Zionist Poalei Tzion party.

He published articles under the name Ben-Gurion, in which he argued for the settlement of the land and the centrality of Hebrew as the only true expressions of Zionism. With the outbreak of World War I he advocated loyalty to the Ottoman Empire, which then ruled Palestine, but later joined the Jewish Legion of the British army, with the hope of fighting for Jewish independence.

After the war, Ben-Gurion returned to Palestine, where he quickly rose to prominence in the Yishuv (the pre-state Jewish community).  He was instrumental in founding a mass political party–Ahdut ha-Avodah, the forerunner of the modern Labor party–and, in 1920, the Histadrut Labor Federation, perhaps the most important instrument for the realization of Zionist goals. Ben-Gurion believed that socialism and Zionism were two sides of the same ideological coin. Jewish nationalism sought not only to achieve Jewish economic self-sufficiency, but also to create a new kind of Jew: proud, independent, and living off the fruits of manual labor.

Beginning in the 1920s, Ben-Gurion led the Zionist labor movement’s struggle against the right-wing Revisionist party, led by Vladimir Jabotinsky. Ben-Gurion believed that the establishment of socialist workers’ hegemony was a crucial step in the attainment of Jewish independence. The arrival in the mid-1920s of tens of thousands of lower-middle class immigrants to Palestine, fleeing anti-Semitism in Poland, was a significant obstacle in the pursuit of this goal. Most of the new arrivals had no interest in socialism or in adopting a new, proletarian identity.

Ben-Gurion’s response, inspired by his sensitivity to the growth of fascism in Europe and his affinity for the Bolsheviks’ use of violence to overcome opposition, was uncompromising. He argued for the use of controlled, disciplined, violence against right-wing strike-breakers and demonstrators, and proposed denying immigration certificates to members of the Revisionist movement. By the mid-1930s, however, Ben-Gurion had softened his position. He began to oppose the use of violence, and, in negotiations with Jabotinsky, went so far as to propose an agreement on labor relations between Histadrut and Revisionist workers.

Like most Israeli politicians, Ben-Gurion dealt intimately with the conflict between the Zionists and the Arab national movement in Palestine. Ben-Gurion first became aware of the potential for conflict with the Arabs during the 1920s. Initially he assumed that as the Arabs began to benefit from the economic growth stimulated by Jewish settlement activity, they would realize that cooperation with Zionism was in their interest. On this basis, Ben-Gurion tried–and failed–to reach peace agreements with various Arab leaders.

In 1930 Ben-Gurion oversaw the creation of Mapai, the Land of Israel Workers’ Party, a coalition of the main labor Zionist movements. In 1933 Mapai took control of the Zionist Organization (ZO), the Jewish national movement’s worldwide organizational structure. Two years later Ben-Gurion became Chairman of the Zionist Actions Committee, the ZO’s main decision making body, and of the Jewish Agency, the de facto government of the Jewish community in Palestine. From 1936-1939 he mobilized the Jewish community’s economic and military response to the Arab Revolt, the armed uprising against the Jews and the British that aimed to break the will of the Yishuv and force the British to withdraw from Palestine.

The clash with the Revisionists was renewed in 1937. In the wake of the Arab revolt, the British Peel Commission proposed the partition of Palestine between Jews and Arabs. The Jews were to receive the northern coastal plain and the Galilee and Britain would retain control of the Jerusalem enclave and a corridor to the coast. The Arabs would get the

For all the plan’s shortcomings, Ben-Gurion and the majority of his Mapai party believed that the opportunity to create a Jewish state should not be passed up, particularly in view of the desperate situation of the Jews in Nazi Germany. This position was opposed by the Revisionists, who feared partition would set a dangerous precedent for compromising Jewish national rights, and by the Zionist Left, who believed the plan endangered the future of Jewish settlement activity and threatened their ultimate vision of Jewish-Arab coexistence. Ben- Gurion pushed through support for the plan, only to see it dropped by the British in response to implacable Arab opposition.

At the same time, conflict erupted on a different front. Beginning with the Arab revolt of 1936-39, and continuing with the struggle for the Jewish state in the 1940s, the Jewish community of Palestine was bitterly divided over the use of armed force. The position of Ben-Gurion and the Hagana–the official Jewish self-defense force–was that Arab hostility should be met with restraint–havlaga. This was needed both in order to prevent the escalation of violence and to preserve good relations with the British, whose support was crucial for the fulfillment of Zionist aims. This position changed with the publication of the 1939 White Paper, in which the British government declared its support for the creation of an Arab Palestinian state and effectively froze Jewish immigration.

During World War II, Ben-Gurion declared that the Zionists would fight with Britain against the Nazis as if there was no White Paper, and would fight the White Paper as if there were no war. In 1942, he was instrumental in drafting the Biltmore Program, which called for open Jewish immigration and the creation of a Jewish commonwealth in Palestine. Following the United Nations’ 1947 decision to partition Palestine into Jewish and Arab states, and with the departure of the British in May 1948, he made the momentous decision to declare the establishment of the State of Israel. He became the first prime minister of the State of Israel and guided the country during the War of Independence.

Since the 1990s, post-Zionist “new historians” such as Ilan Pappe and Benny Morris have alleged that during the war Ben-Gurion was aware of–or even initiated–a policy of transfer, the forced expulsion of Arabs. These claims have been hotly contested by historians such as biographer Shabtai Teveth, who assert that Israel’s first prime minister was resigned to the continuing presence of a large Arab minority enjoying equal rights in the future Jewish state. Yet Ben- Gurion argued against the conciliatory, diplomatic orientation of foreign minister Moshe Sharett. He took a hard line against the return of Arab refugees and pursued an activist foreign policy of military deterrence and retaliatory raids against neighboring Arab states, coming out of retirement in 1955 to lead Israel in the Sinai War against Egypt.

Ben-Gurion’s tenure as prime minister (1948-53 and again from 1955-63) was governed by the principle of mamlachtiut, or statism–the belief that sectarian ideologies and interests must be replaced by loyalty to the state as a whole. Ben-Gurion set aliyah and immigrant absorption as Israel’s top priorities, established the Israel Defense Force, dispersing militias such as the Palmach and the Etzel, and sought to abolish ideological distinctions in education, replacing party-run schools with one all-encompassing state education system.

More controversially, Ben-Gurion presided over the shilumim or reparations agreement, in which West Germany agreed to pay $715 million to the State of Israel in compensation for taking in refugees from the Holocaust. The deal provoked savage public debate: the government was accused of taking blood money from the Germans. Yet without the financial settlement, Israel’s economic development and very survival would have been in question.

On resigning from the premiership in 1953, Ben-Gurion retired to Kibbutz Sde Boker. In 1970, after a period in parliamentary opposition in the Knesset, his retirement became permanent. In the last years of his life Ben-Gurion was a solitary figure, but he continued to advocate aliyah, the ingathering of the exiles, and the settlement of the land, particularly the Negev desert.