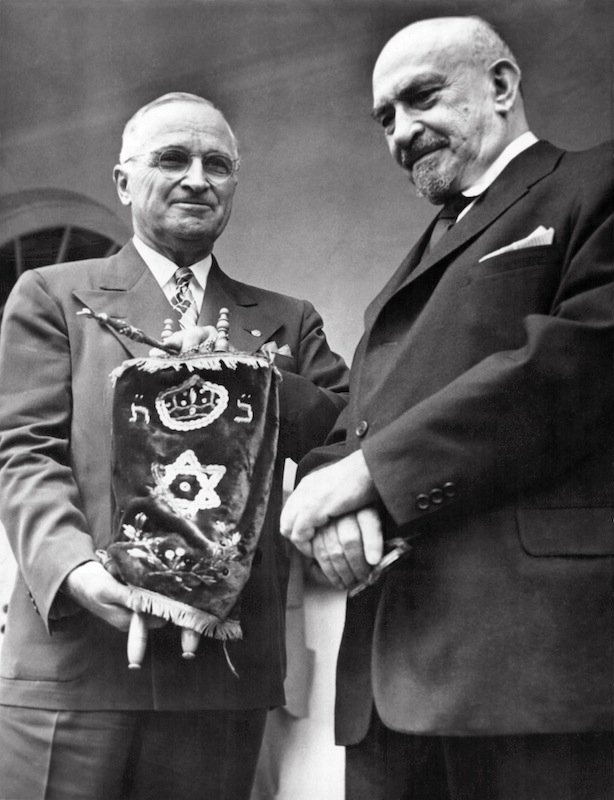 Chaim Weizmann was born in Motol, Russia in on November 27, 1874. He received his education in biochemistry in Switzerland and Germany. Already in Geneva, he became active in the Zionist movement. In 1905 he moved to England, and was elected to the General Zionist Council.

Weizmann's scientific assistance to the Allied forces in World War I brought him into close contact with British leaders, enabling him to play a key role in the issuing of the Balfour Declaration on November 2, 1917, ­­ in which Britain committed itself to the establishment of a Jewish home in Palestine.

In 1918, Weizmann was appointed head of the Zionist Commission sent to Palestine by the British government to advise on the future development of the country. There, he laid the foundation stone of the Hebrew University. That same year Weizmann met in Aqaba with Emir Feisal, son of Sharif Hussein of Mecca, the leader of the Arab movement, to discuss prospects of reaching an understanding on the establishment of independent Arab and Jewish states.

Shortly after, Weizmann led the Zionist delegation to the Peace Conference at Versailles, and in 1920 became the president of the World Zionist Organization (WZO). He headed the Jewish Agency which was established in 1929.

In the 1930’s, Weizmann laid the foundations of the Daniel Sieff Research Institute in Rehovot, later to become the Weizmann Institute, a driving force behind Israel's scientific research. In 1937, he made his home in Rehovot.

Chaim Weizmann again served as President of the WZO from 1935-1946. During the years that led up to World War II, he invested much effort in establishing the Jewish Brigade. He also tried, unsuccessfully, to prevent the issuing in 1939 of the White Paper, which in effect halted Jewish immigration to Palestine. During the Zionist Congress held in Geneva in August 1939, Weizmann harshly criticized the British government for its betrayal of the Mandate and the Jewish people.

On August 29, 1939, he wrote to British Prime Minister Neville Chamberlain to confirm previous declarations that the Jews stand by Great Britain and will fight on the side of the democracies…The Jewish Agency has recently had differences in the political field with the Mandatory Power. We would like these differences to give way before the greater and more pressing necessities of the time.

Weizmann and his wife Vera paid a heavy price during the war, when they lost their son, Michael, a pilot in the Royal Air Force, who failed to return from an operational flight over the Bay of Biscay in February 1942. Weizmann's other son Benjamin served as an anti-aircraft gunner in England and suffered a breakdown from which he never fully recovered.

After World War II, Weizmann was instrumental in the adoption of the Partition Plan by the United Nations on November 29, 1947, and in the recognition of Israel by the United States.

With the declaration of the State of Israel, Weizmann was chosen to serve as the first President of Israel. This role he filled until his death on November 9, 1952.