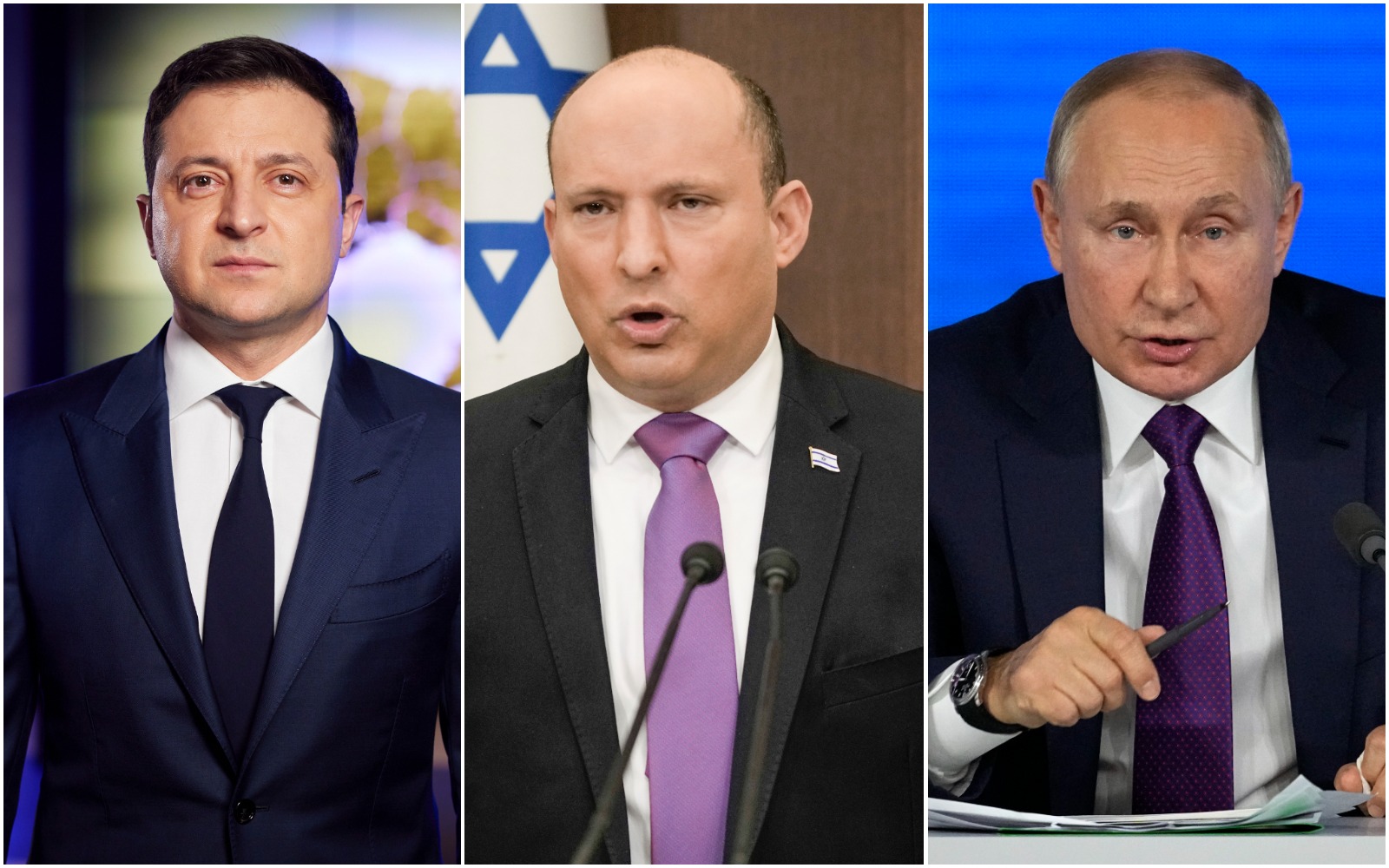 Leaders discuss efforts to end war for over an hour, PMO says; meanwhile Kyiv’s defense minister warns Israel’s ‘reluctance to choose a side’ could hurt ties for years to come

According to the Prime Minister’s Office, the conversation lasted more than an hour and “dealt with ways to end the fighting in Ukraine and the efforts that Israel is making on this matter.”

In a tweet, Zelensky said: “We talked about Russian aggression and the prospects for peace talks. We must stop repressions against civilians: asked to assist in the release of captive mayor of Melitopol and local public figures.”

The call came after Zelensky said earlier that he’d proposed to Bennett that Jerusalem host ceasefire talks between Ukraine and Russia, and asserted that Israel could play an “important role” in the efforts to end the war.

The two leaders have spoken multiple times since Moscow’s troops invaded the country. Bennett had also spoken several times with Putin and last Saturday traveled to the Kremlin to meet him, the first leader to do so since Russia’s invasion began.

Continued dialogue with 🇮🇱 PM @naftalibennett. We talked about Russian aggression and the prospects for peace talks. We must stop repressions against civilians: asked to assist in the release of captive mayor of Melitopol and local public figures #StopRussia

Details of Israel’s mediation efforts have remained obscure. Saturday saw a top adviser to Zelensky deny a report that Israel had pushed the Ukrainian leader to accept an offer from Putin that would see Kyiv make significant concessions to end Russia’s invasion.

Israeli officials have indicated that Jerusalem has not taken a position, nor has it brought forward a proposal for a ceasefire. Rather, they assert that Bennett’s role has been clarifying the sides’ positions to each other and to other global players, thanks to Israel’s good relations with both nations.

Zelensky said Saturday that Ukrainian immigrants were among Israel’s founders, “who brought with them their history and their desire to build a great country, as it is now. So it’s not bad at all for us to have such mediation.”

“We generally support mediation by anyone,” he said in an answer to a question about Israel’s potential role, posed by a reporter for Haaretz. “But I wouldn’t call Prime Minister Bennett ‘anyone.’ You can play an important role because Israel is a country with a rich history.”

Zelensky said he had told Bennett he did not believe negotiations could take place in Russia, Ukraine, or Belarus. “These are not places where we can come to any understandings on ending the war — I’m not talking about technical meetings but meetings between leaders. I believe Israel can be such a place, especially Jerusalem. I think so, and I said this to Bennett.”

There have been numerous apparent ups and downs in Kyiv’s relations with Jerusalem in recent days, with Ukraine at times lauding Israel’s diplomatic and humanitarian efforts and at times strongly criticizing its reluctance to help more.

A fresh example of this came Saturday, when Ukrainian Defense Minister Oleksii Reznikov warned that Israel’s lack of a clear stance against Russia’s invasion could cast a shadow over ties between Kyiv and Jerusalem in the coming years.

“Israel is showing an unexplained disconnect and reluctance to choose a side in the war in Ukraine,” he said in a video shared on social media.

“This will cause a growing lack of trust for many years because we will win, without a doubt, with you or without you,” he said.

“What can you do? You are very influential in the world and in your region,” he added. “You could express your position more actively.”

The Bennett-Zelensky call also came as Ukraine’s embassy in Israel appealed to the High Court of Justice against Israel’s policies limiting the entry of Ukrainian refugees fleeing the Russian invasion, arguing that the move violated international agreements between the nations, as well as international conventions to which Israel is a party, and was not made with proper authority.

Israel has long had good relations with both Ukraine and Russia, and has been seeking to use its position to broker an agreement as it also tries to walk a tightrope maintaining its ties to both countries. But its relationship with Kyiv has strained as Bennett has avoided directly blaming Russia for the war, although Foreign Minister Yair Lapid has done so.

Ukraine has repeatedly pushed Israel for more support since Russia launched its invasion. But Israel has been seeking to avoid antagonizing Russia, which has a strong presence in Syria, where Israel carries out military action against Iran-linked groups.

According to a Channel 12 report on Friday, Israel has begun considering Ukrainian requests for some defensive equipment, such as helmets and flak jackets.