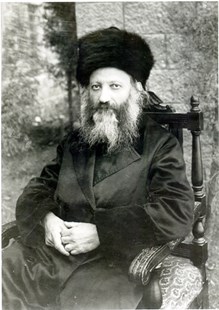 Rav Kook was born in Griva, Latvia in 1865. His father was a student of the Volozhin Yeshiva, the center of 'mitnagdut,' whereas his maternal grandfather was a memeber of the Hassidic movement. He entered the Volozhin Yeshiva in 1884, where he became close to the Rosh HaYeshiva, Rav Naftali Zvi Yehuda Berlin (the Netziv). Already in his youth, he was well-known as a prodigy. At the age of 23, he entered his first rabbinical position. Between 1901 and 1904, he published three articles which anticipate the fully-developed philosophy which he developed in the Land of Israel.

In 1904, he came to the Land of Israel to assume the rabbinical post in Jaffa, which also included responsibility for the new secular Zionist agricultural settlements nearby. His influence on people in different walks of life was already noticeable, as he attempted to introduce Torah and Halakha into the life of the city and the settlements.

The outbreak of the First World War caught him in Europe, and he was forced to remain in London and Switzerland for the remainder of the war. While there, he was involved in the activities which led to the Balfour Declaration. Upon returning, he was appointed the Rav of Jerusalem, and soon after, as first Chief Rabbi of Israel (though the state had not yet been been born). Rav Kook was a man of halakhah in the strictest sense, while at the same time possessing an unusual openness to new ideas. This drew many religious and non­religious people to him, but also led to widespread misunderstanding of his ideas. He wrote prolifically on both halakhah and Jewish Thought, and his books and personality continued to influence many even after his death in Jerusalem in 1935. His authority and influence continue to this day.

From The Jewish Virtual Library