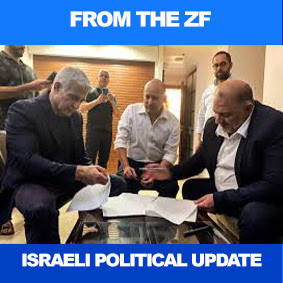 Following over two years of political deadlock, Israel is edging towards the formation of a new unity government which would replace current Prime Minister, Benjamin “Bibi” Netanyahu of the Likud party. Formally led by centrist Yair Lapid of the Yesh Atid party, it will see him rotate the country’s premiership with right-wing religious Zionist Naftali Bennett of the New Right party and Yamina faction. In the first instance, Mr Bennett would serve as Prime Minister and be replaced by Mr Lapid in September 2023.

This proposed unity government is notable in that it relies on the support of the Islamist and Israeli-Arab party Ra’am. Ra’am is the first substantive Israeli-Arab party to enter a government coalition (a minor one MK Arab party allied with the then Mapai-led government in the 1950s while Yitzchak Rabin’s government was externally supported – at times – by Arab parties during the 1990s). Other constituent parties include Blue and White, Labour Party, Meretz, Yisrael Beiteinu, and New Hope.

The new proposed unity government theoretically sits on the smallest possible majority (61), and must be supported by all of its members’ MKs. This support should not be taken for granted. If even one MK rebels, then Israel will almost certainly be forced to hold another election.

For Mr Bennett to become Israel’s next Prime, at least 61 MKs must support a vote of confidence in the new unity government. Until that vote takes place at some point by the week after next, Mr Netanyahu remains Israel’s Prime Minister with Mr Lapid and Mr Bennett entrenched in opposition. The quest to hold together the fragile coalition seeking to unseat him continues.

Israel Heads toward Its Fourth Elections in Two Years