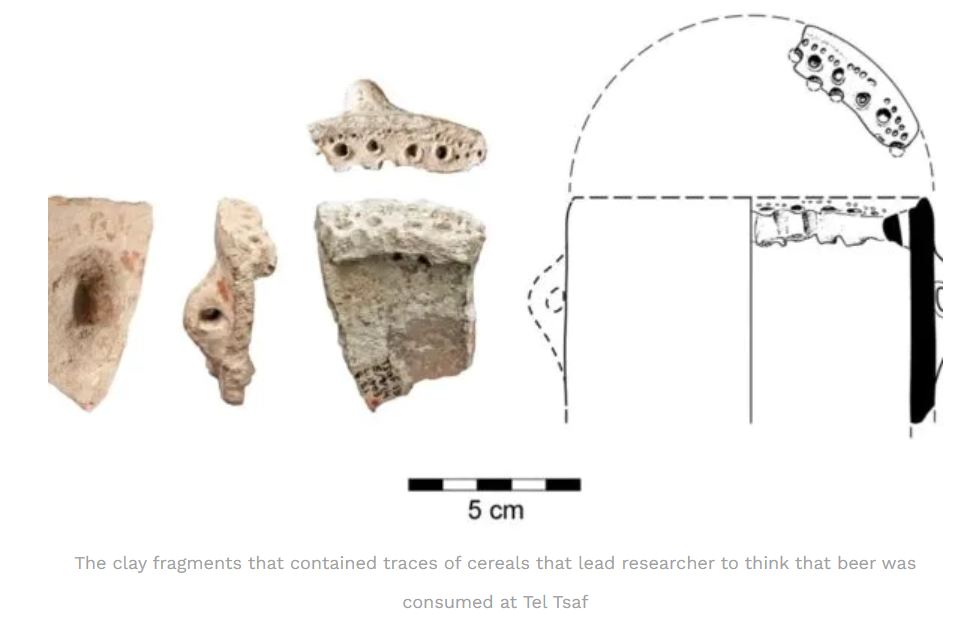 Team of Israeli and US researchers identify evidence of beer consumption in cereal grains at Tel Tsaf, a site that dates back over seven millennia.

A joint team of researchers from Israel and the United States say they have uncovered evidence of ancient social beer consumption after examining cereal grains at a 7,000-year-old archeological site.

The study, led by Professor Danny Rosenberg from the University of Haifa and Professor Li Liu of Stanford University analyzed grain remnants from pottery strainers and concluded the clay tools were used in the production of beer.

Researchers looked into the strainers at two Copper Age sites – 7,000-year-old Tel Tsaf, an ancient settlement in the Jordan Valley that was home to several hundred people in the Chalcolithic Age, and Peki'in Cave, a burial site located in the Upper Galilee which dates back to 4,500 –3,900 BCE.

Tel Tsaf is one of the only sites in Israel that dates back to this period of history, when humans began to transition from small agricultural societies to communities that bore traces of early urbanization.

"The microfossils (phytoliths, starch granules, yeast cells, and fibers) indicate that both strainers once contained fermented beverages made from Triticeae (wheat/barley), Panicoideae, and Cyperus tubers," the scientists explain in an article in the Journal of Anthropological Archaeology.

They said that "these results suggest that beer production and consumption using strainers may have been regularly practiced" during this period of time.

"You can imagine how the nascent society at Tel Tsaf held large events at which they would consume large amounts of food and beer in a social context, and not only for ritual rites," Rosenberg said.

The finding marks the earliest instance of evidence on the social consumption of beer in the Levant before the Bronze Age, according to The Times of Israel.

Additionally, the researchers reported that the alcoholic beverage was significant to gatherings in ancient Israel, and indicated a higher level of social complexity.

"Beer appears to have played an important role in various social settings for communication among social groups as well as between the living and the deceased," the experts concluded.

i24NEWS contributed to this report

One of earliest known mosques found in Israeli desert