Fury with Archbishop over ‘blinkered’ remarks on Christians in Holy Land 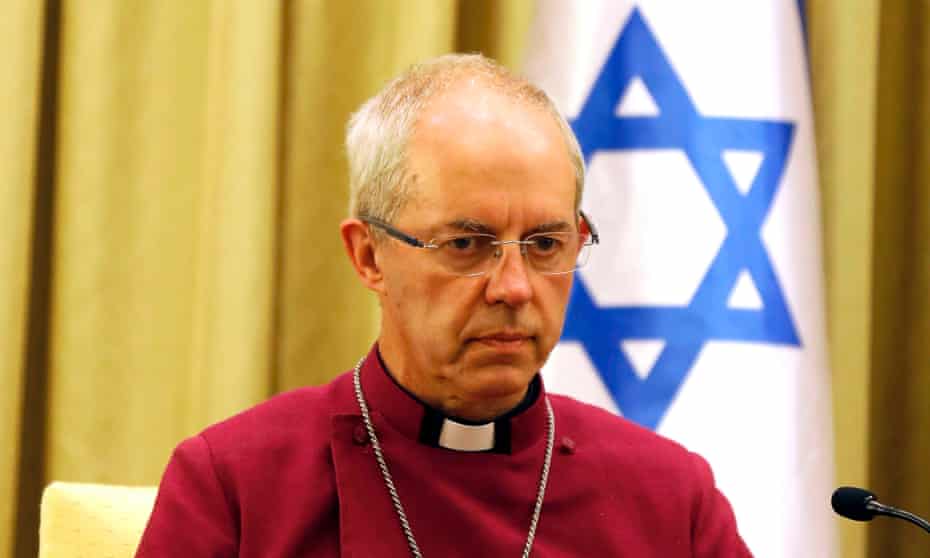 The Archbishop of Canterbury has been accused by British politicians of being “blinkered and partial” amid a furious backlash over church warnings about the treatment of Christians in the Holy Land.

Archbishop Justin Welby coauthored an article in the Sunday Times article this week which blamed Jewish settlers and Israel’s security barrier for falling numbers of Christians in some areas.

Written with Anglican Archbishop of Jerusalem Hosam Naoum, the piece has been heavily criticised by the Board of Deputies, which described it as “deeply troubling”.

There is particular concern over the Christmas story being described in the Sunday Times article as taking pace against “the backdrop of a genocide of infants”.

The allusion to the Gospel story has been interpreted by some observers as a veiled reference to allegations over Israel’s treatment of the Palestinians.

Last week Archbishop Welby invited his followers on Twitter to read a letter which he called an “unprecedented heart-cry” by church leaders in Jerusalem who were warning about what they described as being the “threat to the Christian presence in the Holy Land”.

In a statement on Monday, the Israeli government said the Jerusalem church leaders’ comments “distort the reality of the Christian community in Israel”, adding: “Church leaders should be expected to understand their responsibility and the consequences of what they have published, which could lead to violence and bring harm to innocent people.”

The row comes just weeks after the Archbishop of Canterbury apologised for comparing climate change to the Holocaust. The JC can reveal that president of the Board, Marie van der Zyl, is to meet the Archbishop next year to discuss concerns over what it calls the “deeply troubling” article.

Supporters of Israel have pointed out that the state is almost alone in the Middle East in providing safety and tolerance for all religions. Sir Eric Pickles is one of a number of British political figures concerned by the Sunday Times article.

Tory peer Lord Pickles said he was “disappointed in the blinkered and partial view on where the real problem for declining Christian numbers in the region lies”.

The former MP added: “Without Israel’s active protection of Christian rights, there would be a real danger of [Christianity] disappearing from the region altogether.”

The article said: “The growth of settler communities and travel restrictions brought about by the West Bank separation wall have deepened the isolation of Christian villages and curtailed economic and social possibilities.”

It also referred to the recent “unprecedented and urgent alarm call” from churches in Israel about attacks by “radical fringe groups”.

The Christian population in east Jerusalem was in “steady decline” with some estimating that only 2,000 remained in the Old City, the archbishops wrote.

Theresa Villiers, vice chairwoman of Conservative Friends of Israel, said: “It is unfair to attribute blame to the State of Israel, which is one of the only countries in the region which protects freedom of religion.

“The reference in the article to the Christmas story taking place against a backdrop of the killing of children is especially disturbing.”

Robert Halfon MP said it was “incredibly sad” that the archbishop had taken such a “one sided view”.

He added: “Israel is a haven for Christians and many have been persecuted across the Middle East especially by extreme Islamists. It was only few weeks ago he compared climate change to the Holocaust. It seems that to the CoE hierarchy, at best Jews don’t count and at worst, Israel and Jews can be humiliated whenever convenient.”

In a letter to the archbishop, Board President Marie van der Zyl wrote: “In the past century, both in Israel’s heartlands and the West Bank, the demographics show that the Palestinian population has increased significantly.

“If the overall Palestinian population has greatly increased, but the Palestinian Christian population has significantly declined, then clearly there are more complex reasons than those raised in the article, which appeared to attribute this decline to Jewish settlers and the barrier built to halt the wave of terror attacks of the Second Intifada.”

A spokesperson for Lambeth Palace said: “In their joint article the Archbishop of Canterbury and the Anglican Archbishop in Jerusalem highlighted the serious threat to the continuing
Christian presence in the Holy Land.

“In their article, the Archbishops made a reference to the biblical accounts of the first Christmas. This was not a comment on the contemporary situation in the Holy Land, and no such parallels were drawn by the Archbishops.”

Christians in Israel: the facts

The Sunday Times article co-written by Archbishop Welby has left some with the impression that Christians in Israel are under threat. What is the reality?

Far from being in decline, Israel’s 182,000-strong Christian population grew by 1.4 per cent in 2020. And in a recent survey, 84 per cent of Israeli Christians said they were satisfied with their life, which included 24 per cent who were very satisfied.

Furthermore, studies show that Arab Christians who graduate from secondary school are more likely than Israeli Jews to gain an undergraduate degree.

Christian birth rates are another signal of success. They average at 1.93 children, which is fewer than their Jewish and Muslim counterparts. A low birth rate seen by many demographers as a sign of economic wellbeing.

And in 2020, a lower proportion of Christians required Israeli social services than both Muslims and Jews.