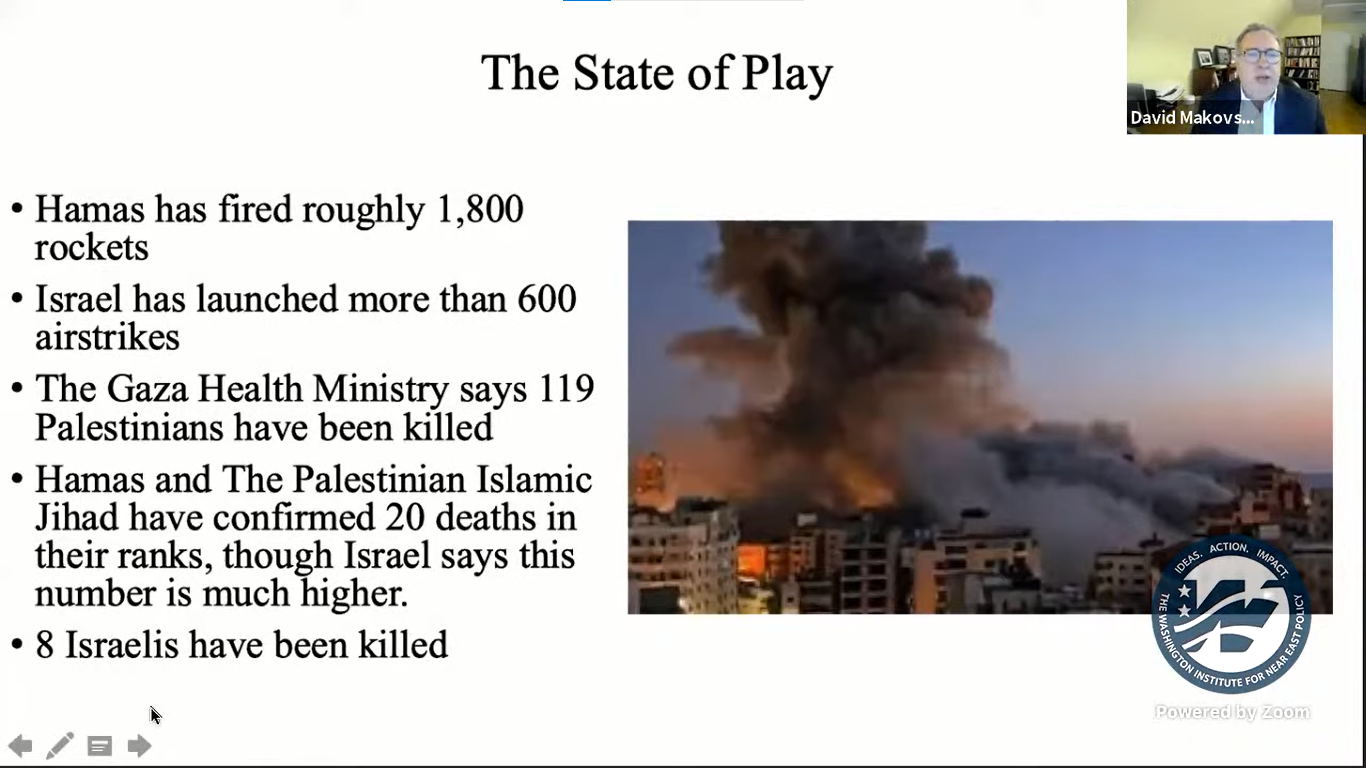 What caused the latest Israeli-Palestinian crisis? What does each side seek to gain from it? And how can Washington help deescalate the fighting? Watch video or read a summary of this expert panel discussion.

On May 14, The Washington Institute held a virtual Policy Forum with Lucy Kurtzer-Ellenbogen, Ehud Yaari, and Ghaith al-Omari. Kurtzer-Ellenbogen directs the Israeli-Palestinian Conflict Program at the U.S. Institute of Peace. Yaari is an Israel-based Lafer International Fellow with The Washington Institute and a Middle East commentator for Israel’s Channel Two television. Omari is a senior fellow at the Institute and former executive director of the American Task Force on Palestine. The following is a rapporteur’s summary of their remarks.

Israelis and Palestinians are suffering immensely, and the tragic repetition inherent in these events underscores the urgency of prescribing a path forward. Yet this cycle of violence is unique for several reasons.

First, a political vacuum now exists on both sides of the conflict. The weak standing of Palestinian Authority president Mahmoud Abbas was exacerbated by his recent decision to postpone the parliamentary election, enabling Hamas to capitalize on the violence and legitimize itself as the “defender of Jerusalem.” In addition to extracting economic and humanitarian aid from the international community, Hamas is striving to appropriate the mantle of Palestinian leadership.

In parallel, Israeli prime minister Binyamin Netanyahu has been weakened by four rounds of elections and increasingly vocal demands from an emboldened ultranationalist movement on the right. Perhaps best of all for Hamas, domestic instability is now erupting in Israeli cities with mixed Jewish and Arab populations. Meanwhile, the signing of the Abraham Accords does not appear to have shifted the postures or behaviors of other regional actors.

Second, the sense of despair among Israelis and Palestinians seems greater than ever, with many citizens on both sides believing that conflict resolution is impossible. What makes this trend even more worrisome is that hardline attitudes are most dominant among youths.

At this stage, the Biden administration understands that there is little policy benefit to be gained by heavily investing U.S. diplomatic resources in trying to solve the conflict, and that the first priority right now is a ceasefire. Yet Washington must still do what it can to lay out a clear, constructive path toward eventual conflict resolution. This means rethinking what it means to deprioritize the Israeli-Palestinian issue. Going forward, the administration needs to staff government bureaus appropriately, reestablish effective channels of engagement, and prioritize fireproofing measures. Allowing the dynamics on Jerusalem and other issues to fester will simply perpetuate the cycles of violence.

Notably, the United States and Israel have both missed opportunities to empower and embolden Abbas as a moderate alternative to Hamas—a problem complicated by Washington’s inability to engage directly with Hamas. To be an effective broker, the Biden administration will have to engage closely with the Palestinians, not just Israel. For their part, Israelis need to address the nationalist fervor of their extreme right wing.

This round of fighting is distinct for numerous reasons. First, both parties were prepared for confrontation. The Israeli intelligence community warned the government three weeks ago that Hamas was poised to attack; Netanyahu and his cabinet considered preemptive military action but decided against it. On the other side, Muhammad Deif, commander of the Izz al-Din al-Qassam Brigades, played a key role by independently guiding Hamas forces.

Second, the conflict has spread to Arab Israelis, who comprise roughly 20 percent of the country’s population. Many young Arab Israelis were drawn into the cycle of violence, and many Jewish businesses were destroyed.

Third, the conflict has had immediate implications for Israeli domestic politics. By instigating the confrontation, Hamas helped topple the nascent anti-Netanyahu “Change Coalition” led by Naftali Bennett and Yair Lapid. Ironically, Palestinians may have handed Netanyahu an additional term, since the formation of an alternative government is now unlikely.

The conflict was partially precipitated by the conduct of the Israeli police, who prevented Palestinian youths from gathering at Nablus gate after their Ramadan iftar. This decision was the mistake of an inexperienced police commissioner. Subsequent police efforts to stop Palestinian youths from throwing stones and Molotov cocktails in the area of al-Aqsa Mosque were more routine, and Netanyahu’s decision making as the situation unfolded was largely moderate and responsible. Yet once the conflict was ignited, he used it for his benefit.

By this point, Hamas has suffered huge military losses that are not fully represented in American media. It is unclear how many of the group’s armed personnel have been killed in total, but when Israel announced a ground operation in the Gaza Strip and moved tanks, artillery, and infantry along the border, hundreds of Hamas operatives exited their bunkers and were killed. In addition, most of the group’s missile production sites have been damaged, and most of its underground headquarters have been destroyed.

Unsurprisingly, Hamas still wants a ceasefire in order to preserve its dominance over the Palestinian scene. When that time comes, the terms of de-escalation must be clear for both sides. Yet the fighting will likely continue for a few more days because Hamas still wants to hit a major Israeli strategic target. Due to the severity of attacks against the group, however, its options are extremely limited in that regard.

Many observers appreciate the Biden administration’s approach so far, though the United States should not get involved in negotiating a ceasefire. For their part, Israeli officials must tell mediators that they will reevaluate preexisting arrangements, including Qatari and UN funding for Gaza. As for the PA’s next steps, Abbas and those around him do not seem interested in resolving the conflict since they are unable to compromise on final-status issues. Thus, regional actors and the United States need to prepare for the post-Abbas era.

This round of conflict and its dire human cost have been driven by three main dynamics. One is Jerusalem, where the escalation began in Sheikh Jarrah, the Old City, and the Temple Mount/al-Haram al-Sharif. Jerusalem remains a core mobilizing issue, and Hamas has leveraged this fact, presenting itself as the city’s protector.

Second, Hamas has instigated violence in part to delegitimize Abbas and gain more power. Violence creates its own narrative, and this dynamic is difficult to counter in the short term.

Third, the West Bank was largely quiet at the outset of the crisis but has now entered the fray. The relative quiet there is notable, since it stems from careful security cooperation and other factors. Yet Abbas’s decision to cancel the election spurred public frustration that helped set the stage for blooming violence. Seven Palestinians have been killed in the West Bank so far, and it is unclear whether this is an isolated incident or the beginning of a trend.

Ultimately, a ceasefire will be reached in Gaza, but its timing is contingent on diplomatic and political objectives. Two goals are vital: ensuring that Hamas cannot credibly claim victory once the fighting stops, and having Egypt be the actor that delivers the ceasefire. Afterward, the parties must address Jerusalem as a perpetual flashpoint, including through close cooperation with Jordan. The Sheikh Jarrah dispute is central and must be dealt with.

As for the Abraham Accords, Israel’s budding normalization agreements with Arab states were not intended to solve the Palestinian conflict, so they will likely continue. Yet the crisis has illuminated the necessity for strong relationships with old peacemakers Cairo and Amman. Those relationships need to be merged with the newer diplomatic and economic initiatives fostered by the Abraham Accords, ideally in a way that benefits Egyptians and Jordanians.

The United States is in a difficult position, facing pressure to lead de-escalation and ceasefire efforts while reminding partners of its own equities. Washington should not let itself be dragged too deeply into high diplomacy. Rather, President Biden’s team should give balanced political support to the professional staff responsible for dealing with this issue, fine-tuning its engagement to better assist operational elements. Regional actors are watching to see if Washington can manage the conflict, and the results will shape their perceptions of the Biden administration.

Future moves should focus on supporting the PA, which needs a credible political narrative in order to show the Palestinian public that cooperating with Israel and embracing diplomacy can yield results. Hamas’s strategy is to coopt the Palestinian national movement, and some regional actors are playing into this dynamic. The international community must reaffirm that Hamas is not the representative of the Palestinian people. Finally, the Israeli government needs to deal with Jerusalem issues at a high enough level of decisionmaking and political awareness to prevent future escalation.

This event was made possible by the Irwin Levy Family Program on the U.S.-Israel Strategic Relationship and the Florence and Robert Kaufman Family.

Gay Palestinian gets OK to live with Israeli lover