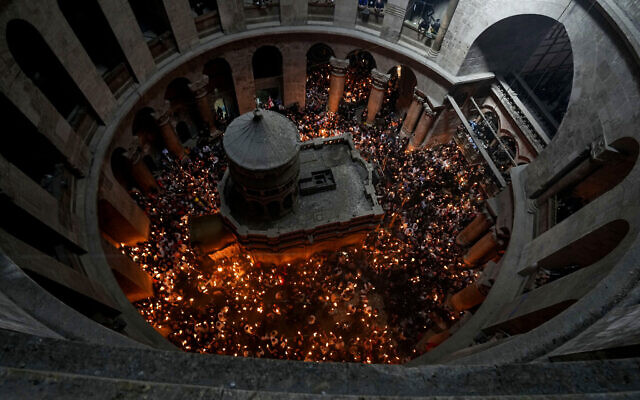 Amman says Israel ‘must respect the historical and legal status quo in Jerusalem and its sacred [sites], and stop all restrictive measures’


Jordan condemned on Sunday Israel’s restrictions on attendance at the “Holy Fire” ceremony at the Church of the Holy Sepulchre in Jerusalem a day earlier, the latest in a series of recent public rebukes by Amman.

“All Israeli measures aimed at restricting the right of Christians to free and unrestricted access to the Church of the Holy Sepulcher to perform their religious rites, including imposing restrictions on the number of worshipers, are rejected and condemned,” said spokesman Haitham Abu Al-Ful in a statement released by the Jordanian Foreign Ministry.

“Israel, the occupying power, must respect the historical and legal status quo in Jerusalem and its sacred [sites], and stop all restrictive measures,” the statement read.

Thousands of Christians celebrated the Holy Fire ceremony on Saturday amid new restrictions on attendance this year that Israel said were needed for safety.

Several clashes erupted between police and worshipers who were kept outside the compound.

Videos shared online showed a policeman pushing a man and grabbing him by the throat after he attempted to break through a police barrier.

Authorities applied a safety law to the Holy Fire ceremony, limiting crowd size commensurate with space and the number of exits. Israel said it wants to prevent another disaster after a crush at Mount Meron last year left 45 people dead in one of the worst disasters in the country’s history. Israel also divided a priestly blessing service for Jews at the Western Wall during the Passover festival into two services, again citing crowding concerns.

However, church leaders rejected any restrictions on principle, saying they infringe on religious freedom.

The Church of the Holy Sepulcher, like the Temple Mount, is governed by a decades-old set of informal arrangements known as the status quo. As at the Temple Mount, known to Muslims as the Haram al-Sharif, seemingly minor violations at the church have ignited violence, including brawls between monks of different denominations.

The condemnation from Amman was the latest in a number of steps taken by Jordan against Israel in recent days, albeit largely symbolic ones.

Jordan has accused Israel of violating the status quo at the site, under which Muslims are allowed to visit and pray while Jews cannot pray and may only visit during restricted time slots.

Israel insists that it is committed to the status quo and is safeguarding the rights of followers of all three religions in Jerusalem. But police have also in recent years turned a blind eye to Jews quietly praying at the site, in what amounts to a violation of the fragile status quo.

The Temple Mount is the holiest place in Judaism, as the site of the biblical temples. Al-Aqsa Mosque, which sits atop the mount, is the third holiest shrine in Islam.

This year, major Jewish, Christian, and Muslim holidays have converged, and tensions have soared as tens of thousands of people flock to Jerusalem’s Old City to visit some of the holiest sites for all three faiths for the first time since the lifting of pandemic restrictions.

Israel says it is committed to ensuring freedom of worship for Jews, Christians, and Muslims.

The Associated Press contributed to this report.