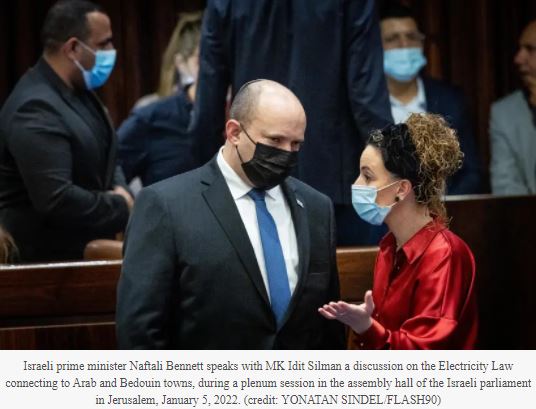 Israel's government began to crumble on Wednesday after Yamina MK and coalition whip Idit Silman announced her resignation from the government.

With this, Prime Minister Naftali Bennett's government loses its majority in the Knesset, leaving it neck-and-neck with the opposition at 60-60. If another MK were to leave the coalition, the government could be brought down in a law brought by the opposition that would disperse the Knesset.

Should the opposition have a majority, they would be able to attempt to form a government without even needing to go to elections. The more coalition members that defect, the easier this option becomes for them.

Silman said that she "could not take it anymore," and that she could not continue undermining the Jewish identity of the State of Israel, a reference to a disagreement she had with Health Minister Nitzan Horowitz over allowing chametz (leavened grain products) into hospitals over Passover.

Netanyahu congratulated Silman on her decision, thanking her "in the name of many people in Israel who waited for this moment."

However, Labor MK Gilad Kariv said it was clear that the disagreement over the chametz was "not the real issue," adding that the government was always careful when it came to matters of religion and state.

Silman ditched the coalition after she was reportedly offered the 10th spot in the Likud Party list in a future election and the position of Health Minister should the party - led by Benjamin Netanyahu - successfully form an alternative government.

IN HER resignation letter to the prime minister, Silman said that she had "joined the current coalition out of a genuine desire to produce unity and closeness on the basis of the common good that unites us as a people and as a state. I honestly believed that in this way we would be able to realize the ideals with which we set out.

"How I tried to preserve the togetherness – to find the common denominator and in this way to realize the important tasks that lay ahead of us," she said. "Some of our partners, who hold key positions in the coalition, probably see things differently and are not prepared to make any compromises."

But now her core values are "inconsistent with the current reality," she said, adding that she is "attentive to the voices from outside and to the sincere protest of the electorate, whose support let us win and with whose votes we were elected."

She concluded by calling on the section of the right-wing which supports the coalition to "admit the truth," and admit that they tried and failed.

"It's time to recalibrate our route. To try and establish a national, Jewish, Zionist government. Let us join hands and realize the values for which we have been elected."

Maariv reporter Anna Ravya Barsky reported via Twitter that several senior coalition members were aware of this decision for at least a week, and it did not come as a surprise to them.

Silman joins MK Amichai Chikli in rebelling against the Yamina Party. Chikli has voted against the government on multiple occasions, starting with opposing the formation of the coalition last June.

Following threats on social media as a result of her resignation, it was reported that Silman's security detail was increased.

Response from the coalition

Bennett, who heads Yamina, was not aware of Silman's decision and was taken by surprise on Wednesday morning. He canceled his planned schedule for the day in order to deal with the fallout from her resignation.

Early Wednesday afternoon, he met with Yamina MK Nir Orbach and Interior Minister Ayelet Shaked, also of Yamina, and will meet with the remaining Yamina politicians throughout the afternoon.

Kariv said that he "very much hopes that at the end of the day Idit Silman will take it back – she is the chair of the coalition. This move can only lead to one result and that is a general election. The last thing Israeli society needs at the moment is another election campaign."

Meretz MK Yair Golan called Silman a "political opportunist of the inferior kind" and said she was putting the stability of the coalition at risk.

Speaking to 103FM, Yamina Secretary General Stella Weinstein said she was surprised by the news.

"It seemed to be in the air, but my friend Idit Silman usually does things in a much more measured way. I know we will work hard to overcome this hurdle too, and with hard work, I'm sure it will be OK."

Also reacting to the news, Meretz MK Mossi Raz warned that "Israel is in danger of a corrupt nationalist government of Ben-Gvir, Netanyahu and Smotrich."

Response from the opposition

Netanyahu congratulated Silman on her decision, thanking her "in the name of many people in Israel who waited for this moment."

"I call on everyone who was elected with the votes of the nationalist bloc to join Idit and return home – you will be received with all due respect and open arms," he concluded.

Likud faction head Yariv Levin congratulated Silman on her decision, saying she did the right thing and that she is "saving the State of Israel from a dangerous and unprecedented process of deep damage to the Jewish character of the state and the foundations of its existence."

According to Likud Party officials, Silman is not the only coalition member to have been considering resignation, and they have said that they are hopeful that others will soon follow her lead.

Religious Zionist Party MK Bezalel Smotrich called Silman's resignation "the dawn of a new day," and said it was the "beginning of the end for Bennett's non-Zionist left-wing government."

Joint List chairman Sami Abou Shahadeh (Balad) also responded to the news, saying that the best scenario for the Joint List would be to go to elections once more, insisting that his party would not be a safety net, "not for Bennett and not for Netanyahu." His party will convene and consider their options when proceeding, he said, adding that "the Likud cannot count on our votes."

United Torah Judaism head Moshe Gafni responded to the events with an apparent dig aimed at Netanyahu, saying that the opposition needed to take stock of which MK "is the most deserving and has the most chance of forming a government" in the event that the coalition dissolves.

However, he later claimed that his statement had not been intended that way.

Groups of right-wing political activists across the country have taken to the street with signs in support of Silman and calls for a right-wing government to be formed.

Against the background of Silman's resignation, the Knesset plenum is set to convene at 11 a.m. at the request of 25 opposition MKs in order to discuss the wave of terror that Israel has recently seen.

The session is unusual as the Knesset is currently on recess following the winter session and does not meet unless a special request is issued.

Likud MKs Shlomo Karhi and Yoav Gallant submitted the request to discuss "a murderous wave of terror [that is] sweeping the streets of Israel – and the government is doing nothing."

This is a developing story.