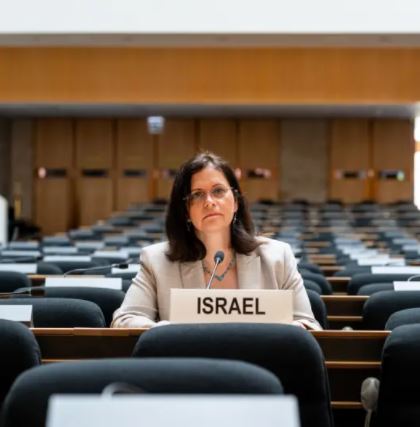 Francesca Albanese has compared "the Holocaust to the Nakba, and advocates for the de-facto destruction of the Nation-State of the Jewish People,” Eilon Shahar said.

srael has denounced the UN’s appointment of Italian legal expert Francesca Albanese to the post of Special Rapporteur on the situation of human rights in the Palestinian territories, arguing that in the past she has compared the Palestinian Nakba to the Holocaust in World War II.

“Israel does not expect any fair, objective, nor professional treatment from an activist who promotes outrageous libels,” Israel’s Ambassador to the UN in Geneva Meirav Eilon Shahar said after the UN Human Rights Council President announced that she had been given the post on Friday.

Albanese has compared “the Holocaust to the Nakba, and advocates for the de-facto destruction of the Nation-State of the Jewish People,” Eilon Shahar said.

Albanese replaces Canadian legal expert Michael Lynk, who ended his six-year term as a special rapporteur by submitting a report accusing Israel of the crime of apartheid against the Palestinians.

Others who have served as a special UNHRC investigator against Israel have been Makarim Wibisono, Richard Falk and John Dugard. Israel is the only country for which a permanent investigator has been assigned.

he author of the book Palestinian Refugees in International Law, Albanese has also spoken in videos posted on YouTube of her support of the Palestinian Right of Return to sovereign Israel.

Hillel Neuer, executive-director of the Geneva-based nongovernmental organization UN Watch said he expected she would follow in Lynk’s footsteps who entrenched “the discrimination inherent in the mandate through his one-sided UN reports and statements that gave a free pass to systematic violations by the Palestinian Authority and Hamas.”

UN Watch published a report on Albanese, that included a video in which she compared the Holocaust in which six million Jews were killed, with the Nakba, the Palestinian experience of destruction and exile during and immediately after the war of 1948.

“Just as tragic, terrible, unspeakable, is the tragedy that befell the Jewish people in the [Holocaust], so for the Palestinians, the Nakba represents the crumbling of the connective tissue of a people,” Albanese said in the video in which her words were translated into English.

Albanese – in that same video – said Israel’s “occupation” of the Palestinian people was not a war between states, but a “colonial project that has turned into apartheid.”