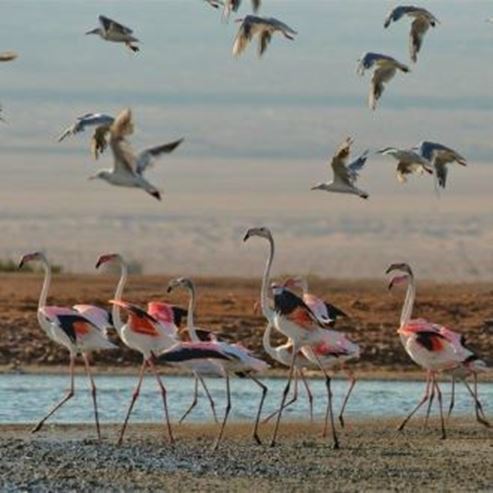 A visit to the Hula Valley Nature Reserve and the new KKL visitors center lets you enjoy a bird-like flying experience and interactive attractions, alongside old-school bird watching.

Sometimes it is not necessary to fly out of the country to escape the daily urban routine and to find yourself in magical natural surroundings without partitions, where you can forget your everyday reality for a while. I was reminded of this visiting the northern Hula Valley, one of the most beautiful nature spots In Israel.

Driving north on Highway 90 (the longest road in Israel), on its eastern side lays the Hula Valley located in the Upper Galilee panhandle region within the northern part of the Syrian-African Rift Valley

After the establishment of the state of Israel, during the ‘50s, the drainage of the swamps in the valley cleared the malaria and gave the local communities additional agricultural land, and fishponds, but over the years created some environmental problems.

To deal with these issues, the Jewish National Fund (KKL-JNF) was called, and began a restoration project of the Lake Hula, in the heart of the Hula Valley, during the ‘90’s.

Lake Hula once again became a refuge for birds, and Israel’s foremost natural site, with a great diversity of vegetation and wildlife. It is considered one of the leading bird watching sites in the world and a model for cooperation between nature tourism and agriculture.

Twice a year, over 500 million birds, from more than 400 species, pass through the area of the Hula Lake Park as they migrate from Europe to Africa and back.

Thousands remain at Lake Hula during the winter, and others chose to nest there during the spring and summer as well.

Now at the end of the winter migration, in spite of the very low temperature, we dressed well and were able to enjoy a two hour memorable experience of nature at sunrise.

At the beginning the valley was wrapped in a blanket of mist, but slowly revealed itself, as the animal world awoke to a new day full of sights, smells and sounds.

Flocks of cranes could be seen in the shallow areas of the water where they sleep at night and wake up to search for food in their big free restaurant – the fields nearby. We could hear them communicating which each other in loud voices and at times engaging in vocal territorial struggle. The park’s employees can already understand basic crane language.

In the past, farmers were not enthusiastic about the thousands of diners who destroyed their crops, and tried to banish them, until the JNF signed a ceasefire agreement and began to feed the cranes proactively. This year they decided not to feed them, however, creating an opportunity to watch cranes returning to the crops in the fields.

The cranes tend to preserve the family cell and we could recognize some family members standing next to each other: the parents with white and black cheeks, and youngsters with brown heads.

The abundance of food, water and comfortable climate brings additional birds to the lake.

Among the other birds we saw were the greater spotted eagle, a buteo, a falcon, kingfishers, pelicans magellans, white herons, stilts and ducks. It is rare to see so many bird species in one place.

We also saw some buffalo in the meadow area, a wildcat and some river otters paving their way in the water.

Watching the birds from a short distance without disturbing them was possible thanks to the Safari Wagon – a custom made wagon led by a tractor which the birds and most of the wild animals are used to.

The tour was conducted by experienced guides, who introduced the history of the area and are very familiar with local flora and fauna.

We were offered binoculars to enable us to have an even closer view.

A day before, we had the same tour at sunset, with different lightening in the background. We could see the cranes getting ready for their night sleep and some of the other birds sitting in their favorite spots, where they would be again the next day.

The Safari Wagons are suitable for everybody: from small children to elderly, as well as persons with special needs.

Other attractions offered include riding on the perimeter route along the waterside and through the fields on mountain bikes, tandem or multi-passenger bicycles or golf carts. There are also various bird watching points including a floating station, a place to watch the ringing of the birds for research purposes and a botanical garden.

The gateway to the Hula Lake Park is the KKL-JNF visitor center, which was inaugurated last November after a decade of planning and building, and with an investment of NIS 130 million.

The structure of the modern impressive visitor center, named for former Canadian prime minister Stephen Harper (2006-2015), is designed as an transparent structure growing out of the ground, with grass covering a slope from the ground to the roof.

There is a rooftop observation platform with a broad view over the entire valley, where we were even able to see Mount Hermon.

The center includes an interactive multi touch wall enabling the visitors to learn about the birds in the area, an illuminated LED three-dimensional globe showing the different migration routes, “Mini Agamon” – a digital topographical model of the Hula Valley that illustrates the story of the lake from the dawn of history through the drying of the lake, the formation of peat soil and the lake’s re-flooding. The center also has a 220-seat auditorium that screens 3D films, and a stereoscopic docudrama and that will also serve as a cinema for northern residents

If you ever dreamed to fly like a bird there is a virtual reality stand that includes beds and armchairs with VR glasses, which simulate flight from the viewpoint of a migrating crane.

The opening of the new visitor center is significant for the local community and for business in the northern region; it is expected to significantly increase business opportunities in the area, while preserving the local agriculture and natural ethos.

There is also a cafe, a souvenir shop and a rental station for vehicles.

Another way to experience the Hula Valley is through a 150 m. high hot air balloon operated by the Galilion hotel, which is located right next to the Lake Hula entrance.

The price is not so cheap but the hotel offers an experiential winter package until the end of March, “Fly on Nature,” which includes:

Waking up with birds: sunrise tour at the lake, hot air balloon flight – about 15 minutes over the lake, a visit to the new Hula Lake visitor center – plus payment according to the JNF price (the visitor center is currently free) and a sunset tour with the birds at 4 p.m. There is also a “Fly on Nature” package, which includes accommodation.

The Galilion hotel, established a few years ago, is a beautiful hotel with a spa, pool, wine room, conference center and fine dining. It also operates the Agamon market complex nearby.

Some of the rooms face the pool, while others provide a balcony overlooking the landscapes of the Hula Valley, Mount Hermon, the Galilee and Golan Heights.

We enjoyed the wide range of food at dinner, a meat and fish meal, the local wine and a variety of delicious deserts, and in the morning an indulgent breakfast using local ingredients, including a wide selection of fresh salads and goat cheeses, all kosher.

If you fancy a snack in between, the Agamon market offers a wide range of restaurants and food stalls, a mix that combines chefs’ stalls, restaurants and shops offering local products including delicacies, chocolate produced in the north, cheeses and wines.

At the Agamon market we also met the charming, Lebanese-born Farah Raslan, one of reality TV show MasterChef’s leading contenders.

She gave us a workshop with her husband Ali on preparing the unforgettable knafeh (a traditional Middle Eastern dessert) dish she prepared for the audition.

The special knafeh is made with semolina, topped with sweet sauce and chopped pistachios and put inside a special Lebanese-style bagel (kaak), accompanied with tea and coffee.

It was delicious and hard to resist even after satisfying dinner at the hotel.

The writer was a guest of KKL