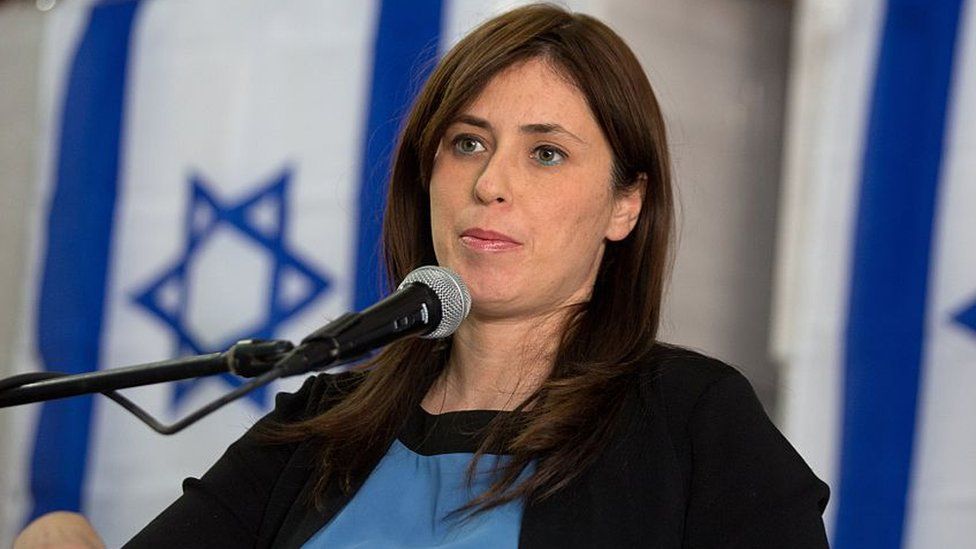 The Israeli ambassador to the UK was rushed out of the London School of Economics by security guards on Tuesday night following pro-Palestinian protests against her visit.

Tzipi Hotovely, who became Israeli ambassador in August last year, was invited to the university for a Q&A session with the LSE Debating Society. The event was met by student protests, with people waving Palestinian flags and shouting: “Palestine will be free. Occupation no more,” and “Israel is a terror state.”

A video that appeared on social media after the ambassador’s visit showed her being rushed out of LSE’s Centre building in Holborn by security personnel. Staff in high-viz jackets were shown holding protesters back to give the ambassador a clear route to her diplomatic Jaguar.

The protesters booed the ambassador as she left the university building clutching a bunch of flowers, and one person can be heard shouting: “Aren’t you ashamed?” The Metropolitan police said there were no incidents of note and that no one was arrested at the protests.

The event, organised by a Student Union society, went ahead in full without interruptions and the ambassador left as scheduled.

Israeli ambassador Tzipi Hotolevy is rushed out of LSE by security this evening after students called for her to be deplatformed pic.twitter.com/axsxHxZOc2

Ahead of the event, LSE Student Union Debating Society issued a statement defending their decision to invite the Israeli ambassador to speak. They said the event was designed to “encourage discourse about issues in the Middle East.”

They continued: “This requires challenging the positions of the people involved and ensuring a diversity of opinions and perspectives. The structure of this event, which is mostly a Q&A, was created to allow students to engage with influential policymakers.”

The event was the first of a two-part series, which continues with a Q&A with the Palestine ambassador to the UK Husam Zomlot on Thursday. Students were able to register for tickets to the chat with the Israeli ambassador, with a number allowed to attend in person and the rest allowed to watch online.

A group called LSE for Palestine publicised the protests and called on people to “make noise to disrupt this event”. One post by the students said: “Since the Debate Society and SU are going through with platforming Tzipi Hotovely, an avowed anti Palestinian, we will be protesting.”

They had previously issued a statement on the visit saying they were “outraged” by Tzipi Hotovely being invited to speak. They added: “We reject the notion that inviting her will provide a balanced take on the “conflict”. This is not a conflict... this is settler-colonialism.”

A spokesperson for the London School of Economics said: “On Tuesday 9 November, the LSESU Debate Society hosted the Israeli Ambassador to the UK for an event on the LSE campus. The event, which attracted some protest outside, lasted approximately 90 minutes, with the Ambassador speaking, taking questions from the audience and leaving on schedule.”

They continued that free speech “underpins everything we do at LSE” and said that students, staff and visitors were encouraged to debate issues in a “mutually respectful manner.”

They added: “Intimidation or threats of violence are completely unacceptable. We will be reviewing the processes around this event to inform future planning.”

MPs and ministers condemned the behaviour of the protesters on Wednesday morning.

Health secretary Sajid Javid said: “I just think it is completely totally unacceptable. Whether it’s the Israeli ambassador or any representative of any other country, anyone, they should have a right to speak at a university or elsewhere. No one should be treated in that way. Those people should be ashamed.”

He added that if anyone was suspected of having broken the law the police should investigate.

He continued: “The ambassador of no country, but especially of an ally like Israel, should be treated in that way.”

Education secretary Nadhim Zahawi retweeted the video of the ambassador being rushed to her car, saying: “This is deeply disturbing, I am so sorry Ambassador Hotovely.”

Shadow foreign secretary Lisa Nandy said the treatment of the Israeli Ambassador was “completely unacceptable”, adding: “There is no excuse for this kind of behaviour.

How to Organise an Effective Israel Engagement Event on Campus