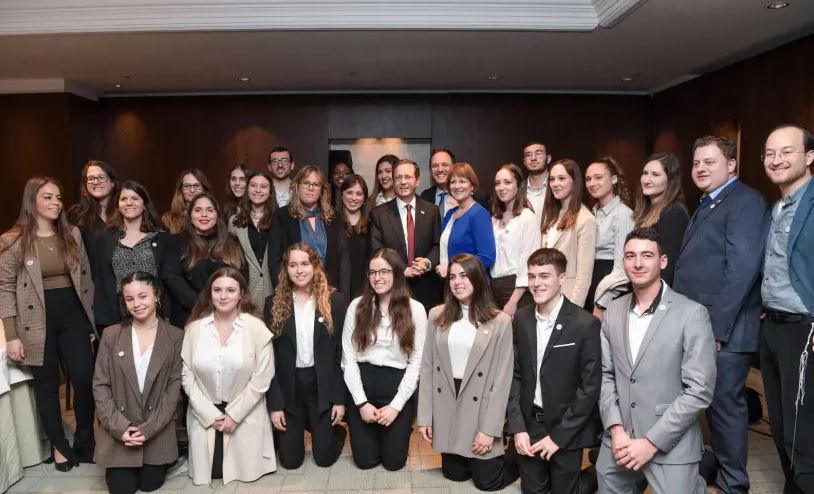 Dozens of Jewish leaders from across the UK attended the meeting with Israeli President Isaac Herzog, which focused on key issues facing British Jewry today.

President of Israel Isaac Herzog met Tuesday with the leaders of the Jewish community in the United Kingdom at a special event organized by The Jewish Agency for Israel and the Embassy of Israel in the United Kingdom, with the participation of Israeli Ambassador to the UK Tzipi Hotovely and CEO of The Jewish Agency Amira Ahronoviz.
Dozens of Jewish leaders from across the UK attended the meeting, which focused on key issues facing British Jewry today, including the impact of the COVID-19 pandemic, the fight against rising antisemitism, and efforts by The Jewish Agency and the local community to strengthen ties with Israel, especially among the young generation and students.
During the meeting, President Herzog spoke with Jewish Agency Shlichim (Israeli emissaries) in the UK, who are at the forefront of efforts to forge connections between Israel and British Jewish communities. The Jewish Agency’s UK delegation, headed by Irit Barash, includes 23 Shlichim who are part of the corps of 2,000 Jewish Agency emissaries stationed in Jewish communities throughout the world, including community Shlichim at Jewish institutions such as Federations and Jewish Community Centers, Israel Fellows serving on college campuses, emissaries to youth movements and summer camps, and Shinshinim (service year emissaries) who serve in the Diaspora for up to 10 months prior to mandatory service in the Israel Defense Forces.
President Herzog said: “Michal and I have put the issue of the relations between the State of Israel and world Jewry as a top item on our priority list, and we intend to invest a lot of time and effort to make sure that all Jews, wherever they are, whatever their denomination, whatever they believe in or don’t believe in, feel at home in the State of Israel. We want to tell the British Jewish community that you are going to be a central pillar in this activity because you are an exemplary community.”
Ambassador of Israel to the United Kingdom Tzipi Hotovely said: “The UK Jewish community has always had strong support for the State of Israel and Zionism. President Herzog and his family are exemplary role models for the deep connection between Zionism and Britain. The connection with the younger generation in the UK in general, and the Jewish community in particular, is very important to me. We at the embassy are continually working to strengthen these ties.”
Jewish Agency CEO Amira Ahronoviz noted the significance and unique nature of the meeting between Israel’s president and the UK Jewish community’s leadership. President Herzog is also The Jewish Agency’s immediate past Chairman of the Executive.
“After working so closely together over the past few years, I can attest that President Herzog leads with a deep commitment, and sincere and genuine concern, for the Jewish people and our challenges,” said Ahronoviz.
UK Jewish community representatives who attended the meeting included: Louise Jacobs, president UJIA; Marie van der Zyl, president of the Board of Deputies of British Jews; Jonathan Goldstein, outgoing chairman of the Jewish Leadership Council; and Nina Freedman, president of the Union of Jewish Students (UK and Ireland).

British MP: bill to outlaw BDS will be presented 'in coming months'