Kohlrabi’s Time to Shine In Israel, the humble vegetable has gotten trendy 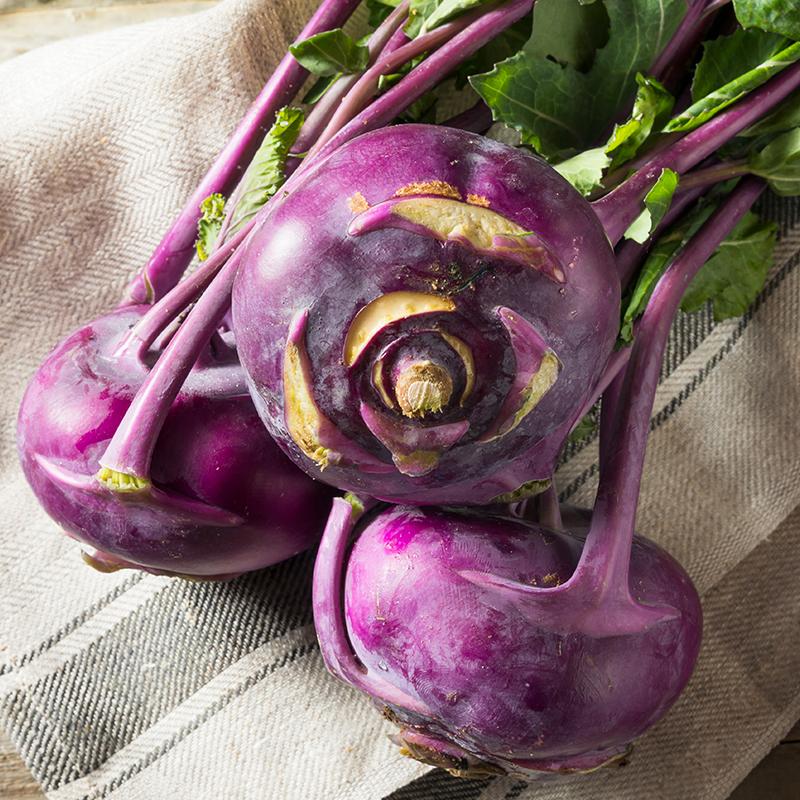 In the United States, kohlrabi—a humble member of the cabbage family—barely registers in the garden of culinary delights. But in Israel, kohlrabi is a shining star, appearing on tasting menus of the trendiest restaurants, and flirting with the country’s best food influencers.

How kohlrabi became such a hot commodity in Israel is a tale of practicality, creativity, and the country’s unique multinational culinary profile. In restaurants across the country you can find it raw and cooked, pickled and chargrilled, whole and sliced. It’s the darling of food bloggers, a vegetable that Israeli farmers love to brag about. It can be shown off—an iconic dish by Dok, an acclaimed Tel Aviv restaurant, put it on the map a few years ago, roasted whole in charcoal, theatrically—or concealed in a salad. It can be loud or anonymous. It’s even starring on podcasts; it’s the subject of the latest episode of a popular Israeli food podcast Anzel and Luxi. In an accompanying Instagram post, Efrat Anzel, a food consultant and content strategist, asks: “Kohlrabi, where have you been all of our lives?”

“When I was in New York City, I rarely saw kohlrabi or cooked with it,” said chef Nir Messika, who recently returned to Israel after a long stint abroad. In Manhattan, he helmed the popular Mediterranean restaurant Timna. Now he owns a new restaurant (also called Timna) in Tel Aviv, which serves a lucrative eight-course tasting menu. On it, kohlrabi appears in multiple shapes and forms. “As soon as I got back to Israel,” he said, “I started working with kohlrabi much more intensely.”

At Timna in Tel Aviv, Messika may serve roasted kohlrabi with an interesting cheese, or use it for noodles as a gluten-free substitute, or pickle it. “It’s one of our favorite vegetables,” he said. “The possibilities with it are endless.” One of kohlrabi’s key advantages, according to the chef? Its versatility when it comes to texture. “It’s not starchy like a potato or a Jerusalem artichoke, so you can absolutely eat it both cooked and uncooked, and if you suspend it in ice water, it becomes incredibly crunchy.”

It’s doubtful that kohlrabi would be as popular in Israel as it is, if it weren’t for the fact it’s compatible with the local climate and very easy to grow—which makes it affordable. The average price of kohlrabi in Israel is just $1.50 a pound, less than organic peppers or endive. That, compared to the $13 price tag of the iconic roasted kohlrabi dish at Dok or the $21 burned kohlrabi dish at Milgo & Milbar, another Tel Aviv institution that loves to utilize the vegetable, makes for a nice, fat margin.

The abundance of the vegetable in Israel isn’t accidental; the growth of kohlrabi has been encouraged by the Ministry of Agriculture for years. An official 2016 report recommends more abundant kohlrabi planting as a roundabout way to improve on the quality of local tomatoes and peppers—incorporating kohlrabi in the crop selection, the report says, improves the soil. Not only that, an experiment was conducted that year to determine the most viable, commercially attractive kohlrabi varieties.

Chef Yzhar Sahar from Rutenberg, a fine dining restaurant in Northern Israel, has been on the Israeli food scene for close to two decades. “I definitely think there are more suppliers now than ever before,” he said. Sahar found his perfect grower in 2015, and has been buying from him ever since. The kohlrabi is so fresh and available, he can allow himself to buy the best—looking at produce on the spot, without worrying about it ever running out. “Kohlrabi is, without question, one of the coolest vegetables,” he said. “Not only is it around for the majority of the year, but it’s also delicious. Is stocks well, too.”

The Rutenberg tasting menu is another testament to kohlrabi’s quiet, yet irresistible power. Sahar ferments it, makes flavorful puree out of it, or smokes the veggie and blends it into “an amazing butter.” The Israeli diners, he says, love kohlrabi in every way; Sahar believes that the vegetable is inherent to many of the food cultures residing in the country. “As a child, I remember it from places that serve shawarma and falafel, in pickled form,” he said. “It’s been a staple.”

Indeed, kohlrabi has been present in the kitchens of both Ashkenazi and Mizrahi Jews since before Israel was founded. In cold Russia and Poland, the sturdy cousin of the turnip has been favored in stews, soups, and winter pickles. In Moroccan cuisine, the spicy pickle plate—part of the spread of salatim accompanying big meals—had always included the crunchy vegetable. “Even before kohlrabi became fancy, I remember tasting it about eight years ago at Hamam al-Pasha,” said Sahar, referring to the eclectic Mediterranean restaurant in Haifa, which is beloved by food insiders. “It’s the perfect vehicle for Israel’s mashup of culinary cultures.”

As easy as it is to dress up—in rich sauces and nostalgic tales alike—kohlrabi can also stand its ground when stripped from its trendy, glamorous status. Israeli chefs have been dressing the simple vegetable in so much decadence, that it’s easy to forget it’s good for you, too—which makes it the ideal fit for Israel’s recent wave of Instagram-friendly veganism. Uri Yermias, of the well-known Acco restaurant Uri Buri, considers it to be “one of the leading vegetables with the highest health benefits,” and advocates eating it as soon as it’s peeled. At the popular online grocery Shik Shak Shuk, which had recently advertised the vegetable as “a great balance between sweet and savory,” it’s a bestseller. “It’s so rich in fiber,” said owner Omer Sachnai. “And the fact you can eat it raw really adds to the appeal. We have a feeling that this is really kohlrabi’s time to shine.”

What is Israeli Couscous?