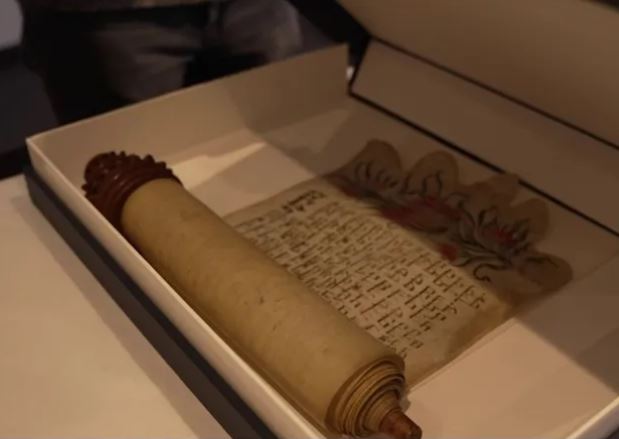 Despite being over 250 years old, the artifact is remarkably well-preserved

A rare artifact offering insights on Jewish history - an Esther scroll penned by a young girl in Italy - is set to go on display following restoration at the Israel Museum.

Complete with decorations from the Book of Esther, the scroll provides glimpses into the Jewish life of the past, and also indicates that the author behind the piece was well-educated.

“She knew not only (how to) read and to pray, but also to write - she was trained in that,” Anna-Nizza Caplan, curator of the Israel Museum, told i24NEWS.

The scroll was written by Luna Amron, a 14-year-old Jewish girl who lived in Rome.

Amron’s family arrived in Italy from Spain and became wealthy in the country’s Rome ghetto.

Despite being over 250 years old, the artifact is remarkably well-preserved, Caplan said, and the scroll arrived at the museum in “very good condition.”

However, the piece requires some restoration work before it can be officially unveiled to the public.

“It has to be restored, to be adjusted… to make it suitable to display,” the curator explained, adding that the process also provides museum experts with an opportunity to further investigate the artifact.

Caplan said that the scroll’s unique author makes the piece an uncommon and critical addition to the Jerusalem-based museum.

“Its addition to our collection, to the Israel Museum’s collection, is crucial because it gives an aspect that until now… was not represented,” she told i24NEWS.

Israel plans to open its borders to unvaccinated tourists.