The History of the Israeli-Palestinian Conflict 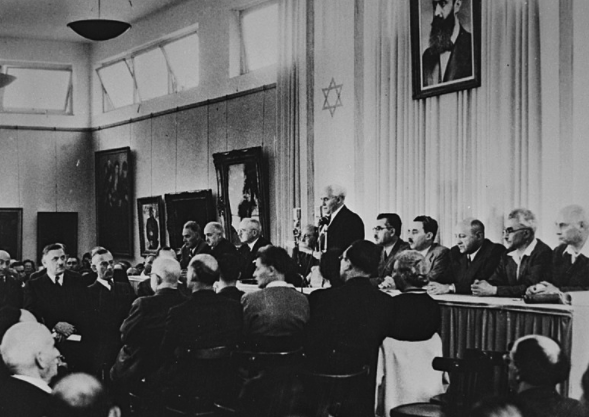 Dive into the history of the Israeli-Palestinian conflict from 1948 to the present. (To see history before 1948, go here.)

State of Israel established when the Israeli Declaration of Independence is proclaimed. The text declares the State of Israel open for Jewish immigration and that the state will “ensure complete equality of social and political rights to all its inhabitants” regardless of religion, race, or sex.

The United States recognizes the provisional government of Israel. (Read more in America’s relationship to Israel.)

Expulsion and exodus of Jews from Arab countries begins; the first wave lasts through 1951. With the establishment of the State of Israel, Jews leave Arab countries by the thousands.

Altalena Affair: a confrontation between Israel Defense Forces and the Irgun. Sixteen Irgun fighters and three IDF soldiers are killed. The event is significant because it shows that David Ben-Gurion is prepared to fight other Jews to establish a single authority for the new state.

First elections in Israel: The first Knesset is elected, with the Labor Zionist Mapai winning the majority of votes. David Ben-Gurion forms the first government. (Read more about how Israeli politics work here.)

Armistice signed with Egypt in February, and in the months that follow, Israel signs armistice agreements with Lebanon, Jordan, and Syria.

Israel admitted to UN a little under a year after the state is established.

Operation Magic Carpet starts was the operation to airlift Yemenite Jews to Israel. 49,000 Jews come to Israel between 1949 and 1950 as a result of this program.

Law of Return passes, stating “Every Jew has the right to immigrate to the country,” sparking an influx of Jewish immigrants.

King Abdullah I of Jordan is assassinated while visiting al-Aqsa Mosque in Jerusalem by a Palestinian nationalist who views his cooperation with Israel as a betrayal.

Operation Ezra & Nehemia airlift more than 100,000 Jews from Iraq through Iran and Cyprus between 1951 and 1952. The operation is named after Ezra and Nehemiah, who led the Jewish people out of Babylonian exile (poetic!).

Immigrants from Iraq arriving in Israel, May 1951 (National Photo Collection of Israel)

King Hussein comes to power in Jordan at age 17, increasing problems with the Palestinians living in Jordan who are angry at their inferior status.

Lavon Affair: a failed Israeli false-flag operation in Egypt (lasts through 1955) wherein Egyptian Jews are recruited to foment instability in Egypt by planting bombs and blaming the Muslim Brotherhood.

Nasser nationalizes the Suez canal: This move eventually leads to the Suez Crisis , which erupts after Israel, with backing from Britain and France, invade Sinai on October 29, 1956, as a pretext for those countries to intervene to protect the canal zone.

Israel withdraws from the Sinai Peninsula in March, officially ending the Suez Crisis.

Fatah formed by Yasser Arafat and three others in the Gulf as a Palestinian nationalist movement. (Read more about Palestinian politics here.)

Adolf Eichmann is captured in Argentina by the Mossad, brought to Israel, and eventually tried and executed.

Operation Yakhin (Yachin) helps Moroccan Jews emigrate to Israel; about 97,000 Moroccan Jews leave by plane and ship between 1961 and 1964.

PLO Founded in Cairo: The Palestine Liberation Organization (PLO) calls for the liberation of Palestine and the destruction of Israel through armed struggle, as well as the establishment of an “independent Palestinian state” between the Jordan River and the Mediterranean Sea. (Read more about the PLO here.)Yasser Arafa (center) in Amman, Jordan, June 1970 (Al Ahram Weekly)

Egypt escalates regional tensions, closes the Straits of Tiran to Israeli shipping, and expels the UN peacekeepers from the Sinai Peninsula.

The new territories will completely alter the political conversation in Israel (and outside it). Israel considers offering the majority of the land in exchange for peace.

UN Resolution 242 adopted, calling for Israel to withdraw from territories occupied during the Six-Day War. This formula, known as the “land for peace,” would form the basis for all subsequent efforts to resolve the Arab-Israeli conflict. (Read more about attempts to solve the conflict here.)

War of Attrition begins: Egypt launches this against Israel after the Six-Day War; basically, artillery shelling into the Sinai, aerial warfare, and raids. Ends with a ceasefire in 1970.

Munich Olympic Massacre: Palestinian terrorists kidnap and murder 11 Israeli athletes (and one West German police officer) during the Summer Olympics. Five terrorists are killed, and the Mossad launches Operation Wrath of God to assassinate those involved.

Yom Kippur War : Arab forces from Egypt and Syria lead surprise attacks on Israel on Yom Kippur, the holiest day of the Jewish year, hoping to gain back territories lost in 1967. Even though Israel eventually prevails, it’s considered a diplomatic and military failure.

Civil War breaks out in Lebanon: The PLO initially try and stay out of the conflict, but they eventually team up with the leftist Lebanese forces.

Land Day protests: the first Arab general strike in Israeli history to protest Israeli expropriation of Arab land in the Galilee. “Land Day” on March 30 becomes an annual day of protest and commemoration.

Entebbe Rescue Operation: In July, an Air France plane, flying from Tel Aviv to Paris, is hijacked by a faction of the Popular Front for the Liberation of Palestine alongside German terrorists. Mossad mounts a rescue operation and rescues most of the hostages. One Israeli — Benjamin Netanyahu’s older brother, Yonatan — is killed.

Likud comes to power (this is called the Mahapakh or “Upheaval”): Menachem Begin, leader of Likud, is elected, ending Labor’s dominance. The first time a right-wing party is in power in Israel.

What are the proposed solutions to the Israeli-Palestinian conflict?