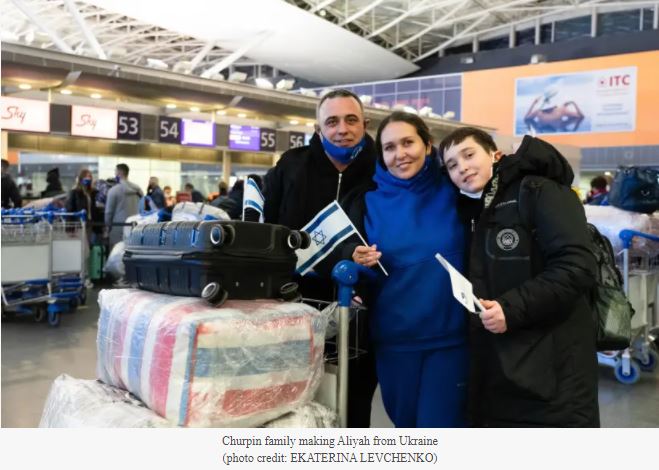 A few dozen Ukrainian immigrants landed in Israel on Sunday as Aliyah and Integration Minister Pnina Tamano-Shata promises: "Our gates are open.”

Aliyah and Integration Minister Pnina Tamano-Shata said at the airport: “Our message to the Jews of Ukraine is very clear: Israel will always be their home, our gates are open to them as usual, and of course in emergencies. Today we are happy to receive dozens of immigrants from Ukraine.” Tamano-Shata also spoke of the secret emergency rescue planned by the government of Israel published exclusively by The Jerusalem Post last week. “I have laid down all the relevant factors, to work in cooperation and to be prepared for any scenario of a massive immediate increase in aliyah from Ukraine.”

President of IFCJ Yael Eckstein added that “We and our partners continue the joint effort of bringing immigrants at all times. The arrival of olim to Israel is the essence of Zionism and the mutual obligation we have, that exists in the Jewish people.”

Over half of the olim who arrived today from Ukraine chose to live in the North of Israel. The leading cities in their absorption were Haifa and its periphery with 30 immigrants. There will be 15 olim who will move to the city of Nahariya and others to Acre, Carmiel, Nof Hagalil and Safed. Their professions are very diverse; the recent olim come from the fields of medicine, economics, education, engineering and tech.

Despite COVID-19, IFCJ and the Jewish Agency have assisted 28,000 new immigrants make aliyah to Israel, of whom about 3,000 are immigrants from Ukraine.

“We have waited so long and hoped that it would be better in Ukraine, but it only gets worse and scarier,” says Anzor Churpin, 45 years old, the husband of Elena (40) and the father of two children; Ilya (12) and Yesenia (20) years from Kharkiv, Ukraine. The Churpin family arrived in Israel on today’s flight and spoke with us from the airport.

ANZOR TELLS us that “I worked as an entrepreneur in the field of trade for a long time, and after the financial crisis in 2007, my income only decreased. After the uprising in Ukraine in 2014, there were more difficulties with work; the government is trying to reduce the number of entrepreneurs as much as possible.”

The financial crisis and instability in the country caused the family to move. The events in Ukraine now, according to Anzor, have become the final motive for repatriation.

“Since 2014, people have been living in instability; they are not sure about the future. Today, only the blind will not notice that we are on the verge of war. Unrest, of course, is present,” Anzor says about the situation in Ukraine.

On Saturday, February 5, 2022, a “Unity March” was held in Kharkov, for which about three thousand people gathered. Kharkov residents decided to go on the March after an interview with Ukrainian President Volodymyr Zelensky to The Washington Post that said in a conversation, the president suggested that Kharkiv could be the first to fall under occupation in the event of a Russian invasion.

“None of the residents of Kharkiv wants conflict. Many people hope that everything will work out without bloodshed. Kharkovites are already tired of the ‘Euromaidans’( The Euromaidan was a wave of demonstrations and civil unrest in Ukraine during 2013 and 2014 with public protests in Maidan Nezalezhnosti, Independence Square, in Kyiv). We hope that everything will be fine,” says Anzor.

Anzor also wants to reunite with his historical country, because much connects him with the Jewry. “My great-grandfather Aaron was a rabbi in Georgia; he was in charge of the community, observed Torah and passed on his knowledge to my dad Michael. During World War Two, the community also existed, but more secretly from the authorities,” says Anzor.

Anzor and his wife Elena have been married for 21 years and have two beautiful children.

“Ilya is in the 6th grade; he is fond of programming, knows several programming languages and loves swimming.” According to Anzor, his son Ilya is ready to move. “He is not against moving, programming is more developed in Israel. We want to send him to a programming school. We also want him to serve in the army, we are discussing this with him,” says Anzor.

Education for children is important, according to Anzor, so this also became the motivation for moving: “Each of my visits to an educational institution is a humiliation. We have very low sponsorship of public schools, there is no motivation for the state to grow a smart nation,” adds Anzor. The eldest daughter Yesenia now plans to graduate from the Kharkiv National University of Arts and plans to repatriate after her parents.

No indication of unlawful spying by the Israel Police